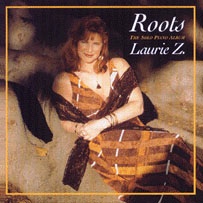 Laurie's Website Laurie's Artist Page on MainlyPiano
Album Links
AmazoniTunes
This site contains affiliate links to products. We may receive a commission for purchases made through these links.
Roots
Laurie Z.
1997 / Zebra Productions
55 minutes
Review by Kathy Parsons
In celebration of the tenth anniversary of the release of Laurie Z.’s solo piano album, Roots, it is being reintroduced and promoted with new video clips and increased airplay. Laurie Z. was a good friend of mine who died of lung cancer in 2006. Many efforts are being made to keep her music in the forefront, and Roots is timeless. This is my review for the original release:

For a while it seemed that many of the solo piano albums being released were safe and predictable, and it was becoming increasingly more difficult to tell one artist from another. This past year has brought forth some excellent surprises, but some of these outstanding albums might be difficult to find. One that is especially deserving of the search is Laurie Z.’s newest release, Roots. I love this album! This is Laurie’s third recording, after Window to the World and Life Between the Lines which were made with her band. Roots is an autobiography set to music, and clearly demonstrates Laurie’s diverse and deeply personal composing styles as well as her mastery of the piano. A classically-trained pianist since the age of four, her touch is warm and expressive.

The album opens with “Stranger in a Familiar Land”, which is one of my favorites. It is full of passion and perhaps a sense of questioning or wonder. “Michael’s Song” is more subdued, but has its own wonderful flow. “In the Monterey Mist” feels just like the title - cool and soft with no hard edges. “For the Love of a Child” conveys a real sense of joyfulness and fun in its uptempo melodic swirls. “The Mysterious Painter” is another piece I love. It is a little darker, but is also passionate and somewhat questioning. “From the Ashes” is a study in optimism, and is again much more uptempo. “Dream Come True” returns to a quiet mood, but a happy and peaceful one. The title tune has a classical touch and lots of colorful minor chords. The feelings expressed are almost unsettling at times because they are so clear and real. A great surprise is “Too Blue”, which fits in perfectly, but is different from the other cuts with its bluesy/gospel style. It hints that Laurie Z. can get “down and dirty” at the piano with the best of them! The last cut, “Good Night, My Friend” is like a warm and personal conversation with a close friend at the conclusion of an evening you wished didn’t have to end. The other three pieces on the album continue to intrigue the ears and emotions with their blend of passion and peace, as well as their flowing melodies. Everything about this album rings true and real, and I hope it is the first of many solo piano recordings from this dynamic composer and artist.

I had the honor of editing the songbook for Roots, and it continues to be one of my favorite books to play from. Songbooks, and samples of Laurie Z.’s music are available from lauriez.com. Very highly recommended!
June 20, 2007
Laurie's Website Laurie's Artist Page on MainlyPiano
Album Links
AmazoniTunes
This site contains affiliate links to products. We may receive a commission for purchases made through these links.
More reviews of Laurie Z. albums 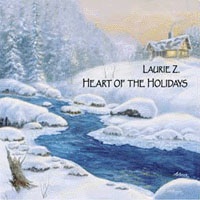 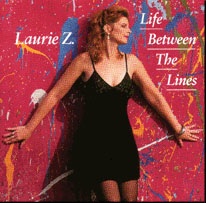 Life Between the Lines
1995 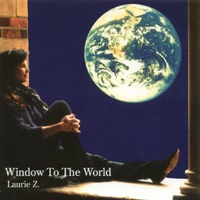 Window To the World
1989
Debut Albums