by Steve Yip
January 27, 2022
Hello, MainlyPiano.com Readers! I write NOT as a music critic, but merely as a music fan open to sharing my musical passions and discoveries (mainly via YouTube.com). As a baby boomer growing up in the San Francisco Bay Area, I grew up with the Motown Sound and what is now known as Classic Rock. As I grew older I excavated more the seminal soil of American roots music with jazz and blues. Here I am sharing a word of appreciation for a music genre that most Americans aren’t familiar with... Afrobeat. 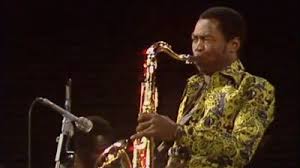 First let’s quickly establish what the sounds and attitude are that originated from Nigeria known as Afrobeat. Fela Anikulapo-Kuti, or Fela Kuti (1938-1997), the late Nigerian bandleader, political activist and dissident, was its innovator and practitioner of this musical fusion. Some would situate such music in the realm of Global Music. Either way, it’s a dynamic, hybrid and muscular music rooted in African harmonies and rhythms with influences from American jazz and soul music -- especially dynamic is the funk influence of James Brown! Fela and his bands have entered memorable musical collaborations with Roy Ayers and Ginger Baker. In 2008, a Broadway musical showcased and celebrated Fela’s life in the 15 month run of Fela!. (In the one show my family and I attended, Patti LaBelle played the role of Fela’s mother, the political activist and organizer, Funmilayo Ransome-Kuti.) 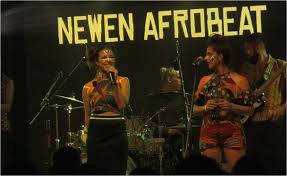 Fela’s Afrobeat is also a music that is infused with politics and is NOT afraid of social commentary and social criticism. For more information about Fela, his life and music, there are several biographies of Fela, and they can be accessed via his page on Wikipedia or via his official website. It must be acknowledged that as a political dissident, Fela was severely beaten, mistreated, hounded and imprisoned by the authoritarian Nigerian authorities.

Despite Fela’s demise in 1997, Afrobeat has continued to thrive and spread globally. This has manifested also in the bands of two of Fela’s sons, Femi Kuti and Seun Kuti. And in the United States and Europe, there have been several bands who have taken up the mantle of furthering the sound of Afrobeat. Get yourself on YouTube to sample and appreciate the music of Fela. Two of my favorites are “Power Show” and “Water No Get Enemy.” 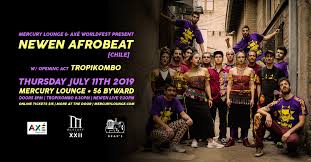 Now, in the aftermath of the above intro, and in no disrespect to other Afrobeat bands, I have been fairly attracted to Newen Afrobeat, a Chilean band that operates as a collective, which has a healthy representation of live performances of Afrobeat music on YouTube.com. (Newen means ‘strength’ in the indigenous language of Chile.) I've been catching this band since early in the pandemic, and I have gotten very enthusiastic about their performances. I’m taking this opportunity to share this invigorating music with readers of MainlyPiano.com. This is relatively large ensemble that has a strong horn and rhythm section with a female front group featuring a very dynamic and charismatic lead singer. They do covers of Fela’s works, but also have their own repertoire. For starters, go to Newen Afrobeat’s YouTube.com channel or check their collaboration with Seun Kuti in covering Fela’s “Zombie”

Last note: Newen Afrobeat has played in Canada and other music festivals in Latin Amerca, including Europe and Africa. Has anyone heard about them playing or if they will be playing in the United States? Hollar back!