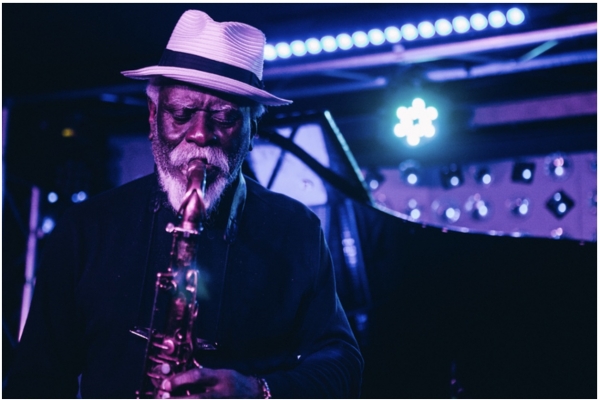 We lost another living legend when Pharoah Sanders, the esteemed tenor saxophonist and purveyor of ‘spiritual jazz’ died on September 24, 2022 at age 81.

Wherever a significant cultural figure passes, we come to confront a media barrage celebrating and examining the person’s life and impact on culture and society. This for sure we saw, for example, with the death of popular music pioneers like Sam Cooke, John Lennon, Marvin Gaye or Aretha Franklin, whose lives and work corresponded with, and who were influenced by, and then influenced important historical and societal developments -- I’m referring to the social struggles of the Sixties and Seventies for fundamental social change. And no doubt the jazz giant Miles Davis deserved the accolades for his historical music contributions, also influenced by, and influencing the era when he passed.

While Sanders’ death did not have the same societal impact or reflections in mass media, say like in today’s cultural scene -- the death of a major hip hop or country music artist gets attention. Pharoah Sanders and his legacy did have a determined and faithful following... and his loss triggered a deluge of obits, memorials and tributes to his lasting contributions to music ranging from the NPR to New York Times to The Guardian (UK).

Pharoah Sanders -- while he was someone who was already well regarded for years, and being recognized in 2016 as a National Endowment of the Arts Jazz Master, he generally eschewed publicity or the third degree. He began his career by hitchhiking from Oakland to New York. Arriving penniless, he began working and learning with the likes of Sun Ra, Ornette Coleman, Eric Dolphy, Art Blakey, Thelonius Monk, and finally landing in the august company of John Coltrane. In that collaboration with the much older Coltrane, Sanders was inducted into a “trinity” which featured Coltrane, free jazz pioneer Albert Aylers and the younger Sanders. He not only outlived Coltrane but went on to nurture a celebrated genre many call ‘spiritual jazz.’

Personally speaking, I can remember being psychically mellowed and hooked with Pharoah Sanders’ monumental “The Creator Has A Master Plan” (1969 Karma) coming off someone’s stereo system (probably my late friend Jeff Tsuji’s). And it’s been a 50 year romance with his music since.

I was conflicted whether I would be capable of writing a tribute to Sanders and his musical legacy. I pulled down and read several of the numerous obits and tributes (some of which are listed at the end). I had tried to catch his shows wherever I could throughout the years, which wasn’t often... one time at (now defunct) Yoshi’s San Francisco, and several times in Manhattan. The last time was only a year or so before the pandemic. We caught him at Birdland in Manhattan and I was shocked sitting at the bar to observe him physically diminished and frail. The performance did allow the ensemble [inclusive of the great pianist William Henderson, who is found in many of Pharoah’s albums] to showcase.

Sorting through many tributes from the U.S. and Europe, one finds a rich and diverse quilt celebrating Sanders’ unique, legendary saxophonic styling (interlaced and layered with Afrocentric and South Asian sensibilities) and of his influence on many younger musicians, such as Kamasi Washington (L.A.) and Shabaka Hutchins (U.K.). Most of Sander’s numbers are quite harmonic, but many literally kick down the door with screeching and shrieking saxophonic opening blasts. (Sanders also had that uncanny ability to ‘overblow’ his horn and many times concluded his numbers with a sax rippling reverberation unlike others.)

I reached out to my comrade Stan Nishimura, a musician and graphic artist, who after leaving the US Army band in Germany in 1966, played trombone with the Si Zentner Big Band, a basic 16 piece big band “like Duke’s and Count’s”. A close student of the music of John Coltrane and other jazz greats, Stan explained, “What I like about Pharoah’s playing is the way that I call, ‘playing in the cracks or hitting between notes’ and how he would create long phrases of cascading sounds including squeaks and other extended sounds. He comes at a time when Coltrane was extending his vocabulary of sounds and concepts... Over the years I consciously tried to incorporate some of these ideas in what I was trying to express.”

One will find this “thang” in his definitive landmark composition “The Creator Has A Master Plan” (1969 Karma). Imagine yourself relaxing with your headphones or chillin’ on the couch kinda lulled into a meditative state and then the movement suddenly shifts into an dramatic, ear piercing screeching before it concludes with a transition back to a mellow continuum! Another example of this high note screeching can be found in the opening of “You’ve Got To Have Freedom” (1980 Journey to the One) And yet on the other hand, one will find sweet, pleasant melodic tunes such as “Moonchild” (1989 Moonchild) or the new-aged “Harvest Time” (1977 Pharoah).

While Sanders' works thematically celebrates spiritualness and tranquility, most music commentators and critics miss the point while noting his proclivity to dive into screechings at unanticipated moments. Most music critics cite this screeching as a hallmark quality of Sanders’ oeuvre, but, in my opinion, most miss the point. For example, one celebratory comment came from the Guardian by Jennifer Lucy Allan, “Sanders could... roll out a spiritual groove that landed like breakers on the shore, or splice the air itself into a trigonometry of fire and aether.”

Ms. Allan is on the money. But get this and understand the context that impacted on the music: Sanders came from the Deep South of Little Rock, Arkansas, and I think that the experience of growing up in a highly segregated Jim Crow society played a role in Sanders’ musical evolution. Pharoah explains in a 2019 interview, “I left Arkansas in about 1959. Arkansas was so racist, I had to get out of there. It wasn’t too good for people like me.”

I interpret these screeching, shrieks, cries and screams as forceful yet painful wailings for justice and resolution stemming from Black people’s condition in these United States. I found this most apropos from the memoir of the revolutionary political thinker Bob Avakian, who captured a conversation he had with a young white cab driver, “... we started talking about John Coltrane and other jazz artists, and at one point — this really struck me — this guy says, ‘You have to understand this about jazz: What’s coming out of those horns is all the frustration and anger of Black people for all their oppression for decades and centuries.’”

Pharoah was very multicultural and generously informed by Kemitic, Afrocentric, Arabic and Eastern sensibilities in his music (1966 Tahuid) (1969 Deaf Dumb Blind - Summun Bukmun Umyun). While I find my fidelity remained with many of Pharoah’s earlier works (1969 Jewels of Thought) (1970 Deaf Dumb Blind), but I also enjoyed his ballads (1987 A Prayer Before Dawn) and later performances, there are some tremendous, inspiring gems from the 1980’s (1983 Heart Is A Melody). I literally breathe a lot on his various live performances that can be found on YouTube.

Here is a selection for readers of MainlyPiano.com, go to the Pharoah Sanders website and also check his Wikipedia page. And following are some selective tributes and obituaries:

A church with open doors: the ecstatic power of Pharoah Sanders - The Guardian