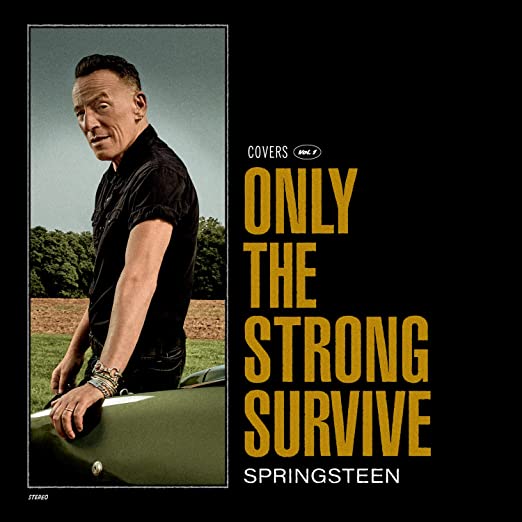 Springsteen’s coming out with a tribute to Soul Music, Y’all! Huh? What...? Really? My response when I saw the video announcement by Bruce Springsteen that he was coming up with a new album in November called ‘Only the Strong Survive’...? I tried not to be overly enthused cuz you have to investigate, evaluate, right? Was this a political statement? What was the reference...? I saw that already associated with this announcement two music videos had already released two covers “Do I Love You?” and the Commodores’ “Nightshift”. Check your YouTube account!

Bruce Springsteen’s video explanation and exposition was clear as he explained that coming off the isolation of the pandemic, and struggling with what was next, in his retreats to his studio: “I found a theme I wanted to explore now I'd spent my working life with my voice at the surface ... But this time, I decided to do something I had never done before... Now of course, the music that led to this epiphany and gifted me this insight was Soul Music [my emphasis].”

Before hip hop, Springsteen certainly was and is one of this generation’s significant musical and social forces since the days when he blasted forth with his driving “Born to Run” back in 1975. People have marveled at his social themes and anthems of the frustrations of the working class and the underdog. Addressing the social and deadened isolation of white blue collar workers caught in the downturn in the Rust Belt, his hugely misunderstood anthem “Born In the USA” was seized and co-opted by many retrograde social forces and wielded as weaponized Americanism. Yet he generally has been cautious in how he pushed back. (Personal editorial comment: At least from my perception because even we on the edges of society benefit from the trickle down. I can go off about how the two white unemployed auto workers in Detroit who beat Vincent Chin to death and walked.)

For a white American artist of his socio-musical stature, this coming album is a compelling statement and should be a welcome celebration of African American popular music. So a quickie assessment of the two music videos released so far:

“Do I Love You? (Indeed I Do)” is a fun, joyfully rousing number fully staffed production musically with orchestra and multi-vocal backup (and dancers) with Bruce in great vocal form delivering a message with call-and-response that is much too brief. Bruce describes it as Frank Wilson’s “rare Motown rarity.” I played it several times back to back.

“Nightshift” is a decently beautiful cover of the 1985 Commodores’ classic. Bruce’s vocals delivers in a very competent, respectful and quiet presentation which was written to honor the memories of Marvin Gaye and Jackie Wilson, two Soul Music pioneers of our generation who had died in 1984 just weeks apart. And under difficult, tragic circumstances.

Bruce continues his commentary (check it here), “Soul Music along with Gospel is some of the most beautiful vocal music ever written and recorded. So I went back and I revisited Smokey Robinson, and David Ruffin, and Jerry Butler, Levi Stubbs, Sam Moore, Tyrone Davis, William Bell. The Supremes with Diana Ross singing. I put my own spin on the singing... modernized some of the most beautiful songs in the American Pop Songbook. I had so much fun recording this music I fell back in love with all these great songs, great writers, and great singers. All of them are still underrated... [again my emphasis]”

Now I get it -- only the strong survive! Springteen’s tribute to Soul Music is scheduled for full release in November and can be pre-ordered. Nuff said!

Postscript. After writing this piece, I felt something was missing after reviewing that sentence about "Born In the USA", and what I felt was Springsteen's soft response to the misuse of that song by backward social forces. I am remiss for not recognizing Springsteen's "American Skin (41 Shots)," in which he joins the outrage from the "41 shots" New York police shooting of the unarmed 23 year old African immigrant, Amadou Diallo in 1999. Diallo tragically triggered his own execution by innocently pulling out his wallet for identification and was killed in a shower of bullets rendered by members of the NYPD Street Crime Unit. I attended my only Springsteen concert (2000) in the aftermath of the song's release, and while the audience was fairly receptive, there were an unmistakeable and loud objection by a chorus of audience members. To his credit, Springsteen performed the song without hesitation or apology.