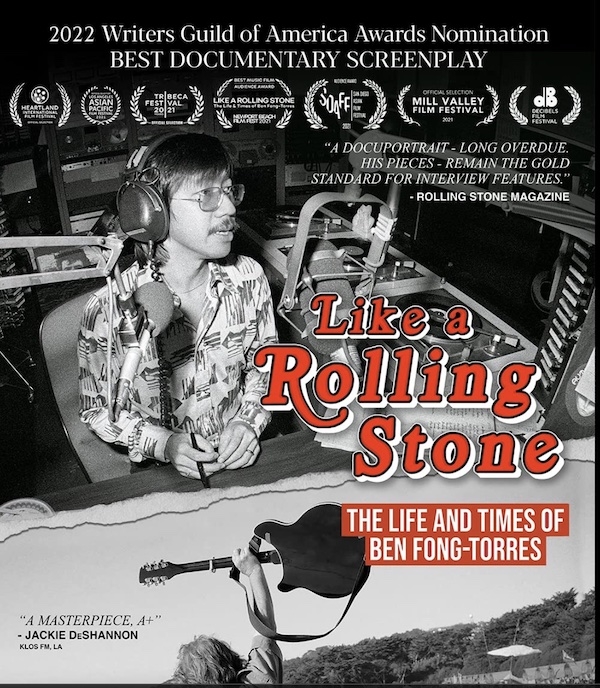 Like a Rolling Stone: the Life and Times of Ben Fong-Torres, a film by Suzanne Joe Kai (2021). Currently on Netflix for English speaking countries.

Let this review of Like a Rolling Stone: the Life and Times of Ben Fong-Torres be an unambiguous and unapologetic pitch for a documentary film you should watch should it leave Netflix rotation. Hopefully, it won’t, but just in case!

And who is Ben Fong-Torres? Well, you should know he is a graduate of Oakland High School as are this writer and our fearless editor and publisher, Kathy Parsons!

The film by veteran broadcast journalist Suzanne Joe Kai has captured reflective interviews not just with Fong-Torres, but with Elton John, Quincy Jones, Carlos Santana, Bob Weir, Steve Martin, Jann Wenner (Rolling Stone’s founder), Annie Leibovitz (the now famous photographer), writer Cameron Crowe (who at age 15 was assigned his first assignment by Fong-Torres), and from family members. For example, after his major interview with Marvin Gaye was published, it caught the attention of Elton John who wanted to get interviewed not just for Rolling Stone magazine, but by Ben Fong-Torres!

But who is Ben Fong-Torres really? This writer (me) was a young Chinese-American geek growing up in Oakland fascinated and struggling to assimilate the rebellious spirit of this new music form which broke pop music (and radio) barriers, I remember him as a DJ on the alternative rock station KSAN-FM (which carried forward the seminal FM alternative music broadcasting pioneered by KMPX-FM) along with peeps like “Big Daddy” Tom Donahue, Russ “the Moose” Syracuse.

Ben Fong-Torres is most known, and typecasted, as the celebrated “rock journalist” for his long term association as a writer and editor of the seminal rock music journal, Rolling Stone. But most people probably did not know of his history, though he has rolled out several books, including a memoir, The Rice Room.

This film documents a journey that is both Asian American history and history of serious rock and pop music journalism and which melded perfectly with the social and anti-war protests that helped define so many of us today. Like a Rolling Stone: the Life and Times of Ben Fong-Torres captures the flavoring that bubbled together in the cauldron of the exciting turbulence of the mid to late Sixties -- the cultural collision of serious rock journalism with the development of what we would call classic rock that burst forward from the folk-rock scene in the Bay Area informed by the protests that began with the Free Speech Movement and threading with the counterculture hippie, black liberation and anti-war movements with the coming of age of a Chinese-American of immigrant parents who emerged and defined the standards of rock music journalism.

In one scene he discusses when his family relocated from the Bay Area to open a Chinese restaurant in Texas:

It was in Texas that I could see discrimination firsthand. The local school district decided that I'd go to the all-White rather than the all-Black school. I was the only Chinese-American kid of more than 450 students. I'll never forget the gym teacher calling me Chop Chop. It was a very humiliating...

I learned to mimic Texas accents to camouflage my Chinatown upbringing. I tried to be cool. The passport to cool-dom in 1957 was rock and roll... The coolest sounds were being made by Elvis, and Jerry Lee, and Buddy Holly, but also by Little Richard and Chuck Berry.

My classmates in Texas invited me to join them for root beer floats after school, and to listen to rock and roll and R&B on the jukebox. Inside that jukebox, there were no racial borders. No segregation. Rock and roll was an equalizer... [my emphasis]

Another poignant story shared in the film concerned the loss of his brother Barry Fong-Torres, a crusading youth worker and ex-probation officer who was assassinated flowing from the volatility and uncertainty that was associated with the social upheaval in the Chinatown community at that time. Then I was a young radical community organizer in San Francisco’s Chinatown/Manilatown, and that disturbing event was memorible for it caused a rippling wave of concern and consternation. For Ben, it was one of deep trauma which is a burden he carries and shares with others to this day as it is described that he tears up every time he thinks about his older brother.

Another story concerned his “multi-tasking world” of working at Rolling Stone by day and volunteering at the bilingual community weekly East-West by night. Writing about street gangs in the community, he described being accosted one evening:

“I was covering a meeting of a youth group. I was just leaving that meeting and walking down the street, and two or three guys approached me and then just began to work me over. There was no accusation, there was no warning. It was just beat-up time.”

Yet, Like a Rolling Stone: the Life and Times of Ben Fong-Torres also covers the lighter and more entertaining episodes of intersections with many who are now considered rock music royalty. It was amazing watching Ben fingering through his makeshift archive of countless cassette tapes labeled with the names of so many artists who he had interviewed. We are also treated to have Cameron Crowe (Almost Famous) share his amazing story of how Fong-Torres gave the then 15-year-old journalist his first writing assignment over the phone. Crowe later landed a Rolling Stone cover story on the Allman Brothers at age 16!

Catch it on Netflix this holiday season. This film is powerful stuff that is both enjoyable and deep, friendly, informative and enlightening, and that should bring some real appreciation of what is not just some other typical celebrity backstory of the convergence of rock journalism and Asian American history.

Hopefully Like a Rolling Stone: the Life and Times of Ben Fong-Torres isn’t scheduled to rotate out. I mean, it is an award winning documentary about a Chinese-American journalist who established a body of work that has garnered the respect of the music journalist community, let alone the willingness of so many artists who look forward to an interview with him. And speaking as a former management professional, may it be added that there may be hidden insights of someone who developed a certain method and standard in his work opening the doors for cultural celebrities to get deep. Clearly, something important was passed on to other Rolling Stone staffers who worked for him and who themselves became successful authors.