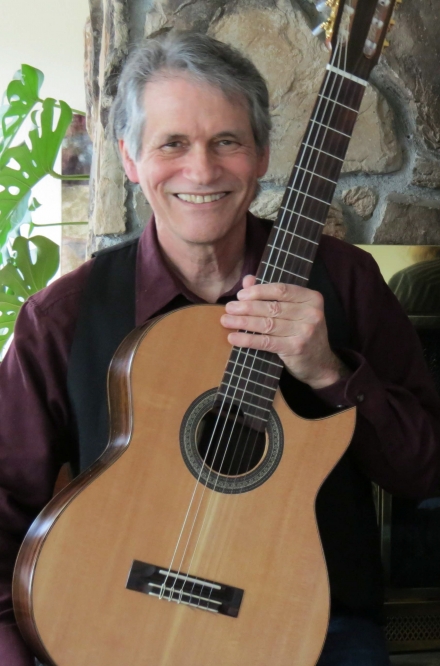 Classical Guitar
3 PM
$15 suggested at the door
Classical guitarist John Jarvie returns to perform in Kathy Parsons’ house concert series in Florence (Sandpines West) on Sunday September 25th at 3:00 PM. There is a suggested donation of $15 at the door. The address and directions will be furnished when reservations are made.

Jarvie’s 30-year career as a classical guitarist encompasses such highlights as a shared performance with renowned flautist Paul Horn at the Portland Coliseum, performances of the “Concierto de Aranjuez” with the Eugene Symphony, and more recently, collaboration with Ballet Fantastique providing live music for the ballet’s original “Danse en Rouge” at Eugene's Hult Center for the Performing Arts and again at the Oregon Shakespeare Festival's Green Show in Ashland.

John earned his Music degree at the University of Oregon. In 1971, he designed and initiated the Guitar Studies program at the U of O Music School, and taught there for 12 years. He taught concurrently at Lane Community College in Eugene and continues to teach at LCC.
John’s special gift is the effect he has on his audiences. One reviewer wrote that John’s listeners “sat breathlessly” during one concert and seemed “spellbound” by another performance. He also shares his music on YouTube, where his 20-plus videos of live performances have attracted over 300,000 views from fans around the world and have received many positive comments.

To reserve seats, email Kathy Parsons at kathypiano@gmail.com. All donations go to the artist.