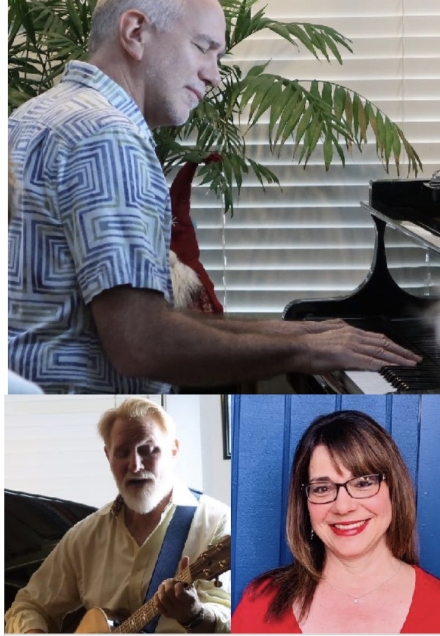 Fund Raiser for The Oregon Coast Humane Society
7pm
$20 suggested at the door
Pianist/composer Dan Chadburn and singer/songwriter Tom Nichols will be making their sixth concert appearance in Kathy Parsons' MainlyPiano.com House Concert Series on Saturday, August 24th at 7:00 PM. Joining them will be Dan’s sister, Jenny Chadburn, also a gifted solo pianist and vocalist. This concert will be for the benefit of The Oregon Coast Humane Society here in Florence and all donations will go directly to them. Cash, checks, and pet supplies are all gratefully accepted.

Dan’s concerts are relaxed and informal and include a piano improvisation in each half. Dan has released seven instrumental albums, most of which have received significant radio airplay worldwide. His 2016 release, Beyond Words, was nominated for Whisperings’ Album of the Year as well as Zone Music Reporter's Solo Piano Album of the Year.

Tom released his first solo album (Trust) in 2011 and has produced the albums of many artists (including Dan) in the Washington, DC area. In addition to his work in music, Tom has an active career in conservation and social justice issues. He is currently the Vice President of Finance and Operations for the Arcus Foundation in New York City.

From the late 1980s through early 2000s, Jenny Chadburn performed as Jenny Butler, The Jenny Butler Trio, and in an original band called NuMonet. After a long hiatus to focus on education and career, she joins Dan and Tom to share her gift as a solo pianist and vocalist.”

There is a suggested donation of $20 at the door. All donations go to The Oregon Coast Humane Society. Reservations are required and can be made by emailing Kathy Parsons at kathypiano@gmail.com. The address and directions will be given when reservations are made.
Visit the artist pages:
Dan ChadburnTom Nichols