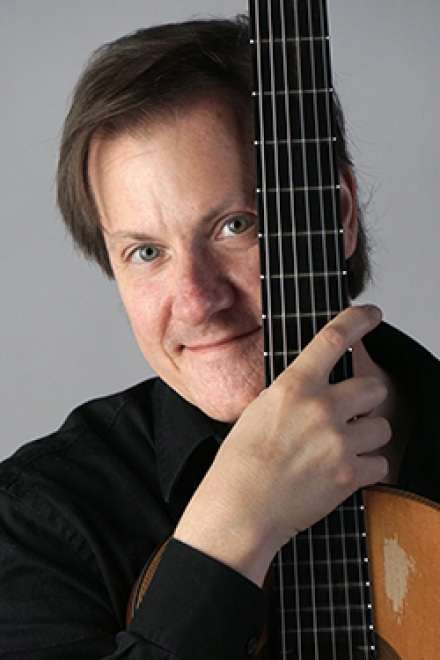 Guitar concert
7pm
$15 suggested at the door
Guitarist David Rogers will make his first appearance in Kathy Parsons’ house concert series in Florence (Sandpines West) on Saturday October 15th at 7:00 PM. There is a suggested donation of $15 at the door. The address and directions will be furnished when reservations are made.

Termed “a prominent guitarist” by The New York Times and praised by The Washington Post for his “astonishingly florid” improvisations, David Rogers presents an evening of solo guitar music with strong leanings towards jazz, world, folk and classical music.
An endorsing artist for GHS Strings, David’s music has been featured in major guitar magazines such as Fingerstyle Guitar in the United States and Akustic Gitarre in Germany. His solo and ensemble performances have been broadcast on American National Public Radio and Bayrische Rundfunk. David was the guitarist for the Oregon Shakespeare Festival for 18 years and taught at Southern Oregon University for 13 years. He has recorded for Dorian, Callisto and Focus Recordings and has given recitals and conducted master classes throughout North America,
David will play a program based around Spanish, Flamenco, Up-Tempo Latin, original settings of Leonard Cohen, The Rolling Stones, Roxy Music songs, as well as music by the Beatles, J.S. Bach and original compositions. He will also be premiering an original setting of Tim Buckley’s stunning Song to the Siren.

To reserve seats, email Kathy Parsons at kathypiano@gmail.com. All donations go to the artist.