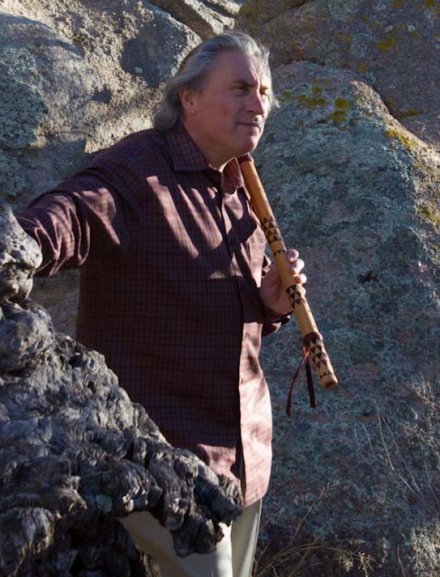 Native American Flute, Storytelling and More
7pm
$15 suggested at the door
World flutist Gary Stroutsos will be performing in concert in Kathy Parsons’ House Concert Series on Saturday June 3rd at 7:00 PM in Sandpines West (Florence, OR). Stroutsos performs world flute music drawn from many traditional cultures and is perhaps best-known for his haunting work on the Native American flute. Originally trained as a jazz flutist, Stroutsos is acknowledged to have made a significant contribution to the preservation of Native American music and culture. A Greek-Italian-American who was born and raised in Vermont (now residing in Seattle), Stroutsos has had the rare opportunity to spend time with indigenous cultures in several communities of North America, where he learned to play the Native American flute. He will also be sharing time-honored stories from his long association with our American Indian people. Lakota, Mandan-Hidatsa, Navajo and Salish Kootenai elders asked Stroutsos to set their songs to his flute, which has been invaluable in developing the insight and character of authenticity that his recordings embody.
Over a career spanning more than 35 years, Stroutsos has brought his unique music and stories to audiences throughout North America as well as in Japan and Korea. His work includes internationally-acclaimed recordings at sacred sites, using the unique acoustics and history of each great space as the starting point for a deep musical exploration. His music can be heard on the soundtrack of Ken Burns’ PBS documentary, Lewis and Clark - The Journey of the Corps of Discovery, which led to a command performance at the White House for President Bill Clinton in 1997. He also composed and performed the music for Desert Dreams: Five Seasons In The Sonoran Desert that has been airing nationally on PBS.
"I cannot imagine trying to come to terms with the history of this complicated country I have chosen to make my life's work without Gary's exquisite mastery and understanding of its many varied musical traditions.  We don't leave home without him."  - Ken Burns, Florentine Films

“In his lifetime, Gary has played music from many cultures. His integrity, humanity and humor have opened doors into personal and private worlds. The gift of songs and relationships with people from around the world has enriched Gary’s life. These are gifts that Gary honors and remembers.” -Julie Cajune, Montana educator

Reservations are required and the address and directions will be furnished at the time reservations are made. Email Kathy at kathypiano@gmail.com to reserve your seats.

A SECOND CONCERT HAS BEEN ADDED FOR JANUARY 4TH AT 2:00 PM.
Visit the artist page:
Gary Stroutsos