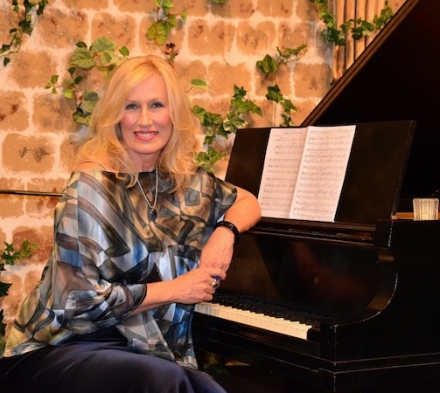 Piano and Vocals
7pm
$20 suggested at the door
Pianist/composer/vocalist/mult-instrumentalist Darlene Koldenhoven will be performing a house concert in the home of Kathy Parsons on Friday May 31st at 7:00 PM as part of the MainlyPiano.com house concert series. Perhaps best-known for her soaring soprano vocals on Yanni’s Live at The Acropolis tour and PBS special and her role as a tambourine-waving singing nun in both Sister Act movies, Darlene has recorded ten highly-acclaimed albums under her own name, was awarded one Grammy and has been nominated for three more, and has sung on more than a thousand recordings as well as for films, television commercials and charitable causes.

Other remarkable career highlights include singing with Robin Williams at the 2000 Academy Awards, singing for President Clinton in his last election stop in 1992, and singing on albums by pop superstars Barbra Streisand, Whitney Houston and Rod Stewart, to name a few. Her 2017 album, Color Me Home, was named 2017 Best Vocal Album by Zone Music Reporter; that album currently has 20 wins and 35 nominations in various competitions. Her 2018 release, Chromatones, is made up of instrumental arrangements of the songs on Color Me Home. An extraordinary artist, it will be a thrill to welcome Darlene Koldenhoven to Florence and to have her perform for us!

You can visit www.DarleneKoldenhoven.com to hear her music, watch her videos and learn more about her! Reviews of four of her albums are on MainlyPiano.com.

There is a suggested donation of $20 at the door. All donations go to the artist. Reservations are required and can be made by emailing Kathy Parsons at kathypiano@gmail.com. The address and directions will be given when reservations are made.
Visit the artist page:
Darlene Koldenhoven