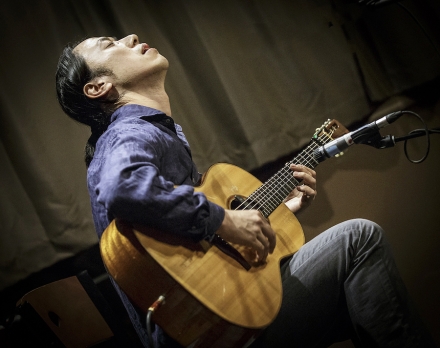 Solo Guitar Concert
7pm
$20 suggested at the door
Hiroya Tsukamoto will be performing a guitar house concert in the home of Kathy Parsons on Thursday May 16th at 7:00 PM as part of the MainlyPiano.com house concert series. Hiroya’s music has been called “cinematic guitar poetry,” and JazzReview.com says “chops, passion and warmth. Zealously recommended.”

Hiroya is a one-of-a-kind composer, guitarist and singer-songwriter from Kyoto, Japan. He began playing the five-string banjo when he was thirteen and took up the guitar shortly after. In 2000, Hiroya received a scholarship to Berklee College of Music and came to the US. He formed his own group in Boston, Interoceanico, which consists of musicians from around the world. The group released three acclaimed albums: The Other Side of the World, Confluencia and Where the River Shines. More recently, Hiroya has released three solo albums: Solo, Heartland and Places. He has been performing concerts internationally including several appearances at Blue Note in New York City and on Japanese National Television. In 2018, he won 2nd place in the International Finger Style Guitar Championship. There are several videos of Hiroya’s performances on his site: www.HiroyaTsukamoto.com. This promises to be a wonderful evening of music, song and storytelling!

There is a suggested donation of $20 at the door. All donations go to the artist. Reservations are required and can be made by emailing Kathy Parsons at kathypiano@gmail.com. The address and directions will be given when reservations are made.