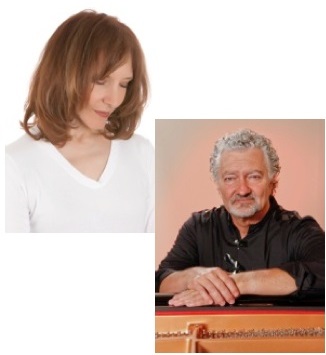 Solo Piano Concert
7pm
$15 suggested donation at the door
Fellow pianist/composers from Colorado will be appearing in Kathy Parsons’ house concert series on Saturday, July 9th at 7:00 PM. Kathryn Kaye is making her Florence debut, and Louis Colaiannia returns for his second concert here. On her recordings, Kathryn Kaye has one of the most delicate touches imaginable on the piano keys, so having her perform here will be a real treat! When he was here last year, Louis Colaiannia stayed at Driftwood Shores and composed most of the music for his upcoming album there. Won’t it be fun to hear how Florence sounds on the piano?

Kathryn Kaye has just finished recording the piano tracks for her sixth album. Her fifth release, Patterns of Sun and Shade, was awarded “Best Piano with Instrumentation” at the 2015 Zone Music Reporter Awards. She has recorded all of her albums at Imaginary Road Studio with legendary producer, Will Ackerman. Residing in the mountains of Colorado provides much of the inspiration for her music, which is soft, warm, and very beautiful.

Louis Colaiannia (coal-ee-AH-nah) is a native of Denver, Colorado. He has pursued music his entire life with the simple goal of sharing his gift with the world. Louis is a master of classical piano, an accomplished songwriter, arranger and performer. His music has inspired the lives of thousands of people in performances that have been referred to as “stunning in their power and beauty.” Colaiannia is a nationally touring musician performing solo concerts as well as concerts with other artists. Colaiannia has released eight albums to date, and has recorded the last couple at Imaginary Road with Will Ackerman.

Reservations are required and the address and directions to the concert in Florence (Sandpines West) will be furnished when reservations are made. There is a suggested donation of $15 at the door. CDs and sheet music will be available at the concert. All donations go to the artists.
Visit the artist pages:
Kathryn KayeLouis Colaiannia