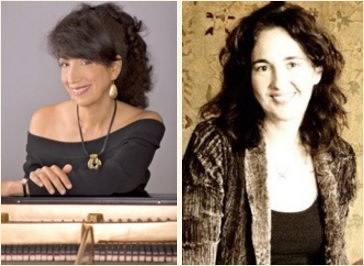 Lisa Downing is a classically-trained pianist who was nominated for two Emmy Awards this year for a benefit concert she performed for the Colorado Women’s Hall of Fame. She has performed in concert all over the world both solo and with other notable artists, including Liz Story and Suzanne Ciani. Lisa recently released her fourth solo piano album called The Wisdom of My Shadow, which is a “Pick” on MainlyPiano.com. There is an interview with Lisa as well as reviews of all of her albums on that site.

Starr Parodi is releasing her second album, The Heart of Frida, the follow-up to her 2008 Album of the Year Award-winning debut, Common Places. Starr has scored the music for hundreds of movies, television programs and live orchestral works. A classically-trained artist, Starr played piano and keyboards with various gospel and soul bands, catching the attention of Arsenio Hall who invited her to play keyboards for his dynamic house band, The Posse. Starr was also invited to play at The Kennedy Center for Bill Clinton’s Presidential Inauguration and was a featured artist for Keyboard Magazine’s 20th Anniversary Concert.

Please join us for a very special evening of piano music! Reservations are required by emailing Kathy Parsons at kathypiano@gmail.com. The address and directions will be furnished when reservations are made.
Visit the artist pages:
Lisa DowningStarr Parodi