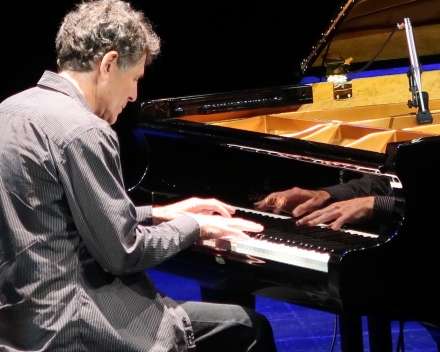 Solo Piano Concert
7pm
$20 suggested at the door donation
Composer/Steinway Artist/Pianist for Peace Louis Landon will be appearing in concert in Kathy Parsons’ MainlyPiano House Concert Series in Florence, Oregon on Saturday October 13th at 7 PM. An exceptionally versatile artist with roots in classical, jazz, new age, and pop music, Landon’s musical voice is uniquely his own. He has three missions in life: to create a more loving and peaceful world by writing, recording and performing music from the heart; to inspire people to live joyously and passionately; and to awaken and to assist people in healing themselves through music and mentoring. Landon tours all over the country performing solo piano and as part of the Whisperings Solo Piano Radio group.

Louis Landon is formerly from New York and is currently a resident of Sedona, AZ. Having dedicated his life to music, his career has taken him around the world playing a variety of styles with some of the most recognized names in the entertainment industry: classical music for Mikhail Baryshnikov on national and international tours, Latin music with "Pucho and his Latin Soul Brothers" on national and international tours, pop music with Rupert Holmes on television and national tours, rock and roll with John Hall, opening for "Little Feat" on national tours.  For the past 29 years, through his production company, Landon Music Company, he has written and produced music for films, videos, and commercials, including three years of "best plays" and “bloopers" commercials for the National Basketball Association. He has also released 29 albums/CD, 22 of which are solo piano instrumentals. Landon’s latest, Healing Hearts 4 - Solo Piano, was released on August 24, 2018. He is currently finishing up another album and will also be releasing a “best of” album before the end of the year called Five Years - The Best of Sedona. Interviews with Landon and reviews of most of his piano albums are available at Kathy’s website, MainlyPiano.com. More info is also available at LouisLandon.com.

Please join us for an evening of great music and entertaining stories in this intimate setting. There is a suggested donation of $20 at the door. Reservations are required by emailing Kathy at kathypiano@gmail.com. The address and directions will be given when reservations are made. CDs and songbooks will be available for sale and for autographing.

All donations go to the artist.
Visit the artist page:
Louis Landon