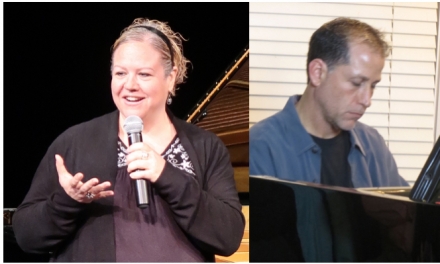 Solo Piano Concert
3pm
$20 suggested at the door
Pianist/composers Michele McLaughlin and Steve Rivera will be presenting a dynamic piano concert in Kathy Parsons’ MainlyPiano.com house concert series on Sunday August 4th at 3:00 PM. Both artists have played here before, but it’s been a few years for both.

Michele McLaughlin hails from Salt Lake City, UT and just released her nineteenth solo piano album, Memoirs. She has the distinction of having her music streamed more than a BILLION times on Pandora Radio and was recently interviewed for Rolling Stone Magazine - a very rare honor for a pianist! Known for her warmth and deeply personal music, Michele has become something of a superstar in the solo piano world.

Steve Rivera is from Costa Mesa, CA and released his second album, Beyond Measures and Time, last fall. Both of his albums have been produced by the legendary Will Ackerman (Windham Hill) and were nominated for a variety of awards. He is currently working on a musical that tells the story of King David as well as new music for his third album.

There is a suggested donation of $20 at the door. All donations go to the artists. Reservations are required and can be made by emailing Kathy Parsons at kathypiano@gmail.com. The address and directions will be given when reservations are made. CDs and songbooks will be available for sale and autographing.
Visit the artist pages:
Michele McLaughlinSteve Rivera