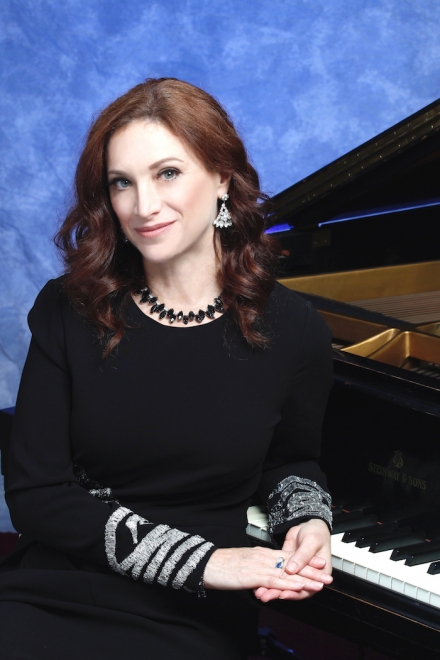 Solo Piano Concert
7pm
$20
The 2018 house concert series is kicking off with the return of very special guest artist, Robin Spielberg! With more than a million recordings sold, Spielberg is one of the best-loved pianists in the US. With eighteen albums, inclusion in more than forty compilations, and her award-winning autobiography, Naked on the Bench: My Adventures in Pianoland, Robin enchants with her music as well as her vivid stories about the inspiration for each piece. Her discography includes albums of original piano solos, arrangements of American standards, original pieces for piano/ensemble, recordings for the holidays, a collection of favorite Americana melodies, and a lullaby album. Her newest recording, On the Edge of a Dream, is an improvisational solo piano album “for dreaming, contemplation, relaxation, medical therapies.”

A Steinway artist, Robin made her Carnegie Hall debut in 1997 with a sold-out performance at the Weill Recital Hall and has performed there twice since. Other memorable performances include a guest spot on a PBS Christmas special; live performances on CBS Saturday Morning, Good Morning Arizona, Life Time Live, CBS New Orleans, and a private concert for the factory workers at the Steinway & Sons historic piano factory in New York.

Robin is also a Celebrity Spokesperson for the American Music Therapy Association. Her interest in music and healing grew when she witnessed the positive effect music had on her own baby daughter (born prematurely) during her four-month stay in the neo-natal intensive care unit. As Spokesperson, she conducts workshops and seminars on the topic of music and healing throughout the US in hospitals, schools, community centers, nursing care facilities and performing arts centers. Robin was the featured performer at two of AMTA’s national conferences, performing for music therapists from around the world. In 2014, she was asked to do a TEDx TALK on music and wellness (now on YouTube on the TEDx channel).

Robin is a founding member of the Tony-award winning Atlantic Theater Company. She currently resides in rural Pennsylvania with her husband/business partner, Larry Kosson. Their daughter, Valerie, is in college.

There is a suggested donation of $20 at the door. Reservations are required by emailing Kathy Parsons at kathypiano@gmail.com. The address and directions will be given when reservations are made.
Visit the artist page:
Robin Spielberg