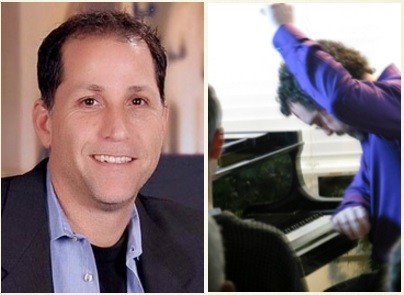 Steve Rivera’s debut album, Dividing the Darkness, is on the ballot for the 2016 Grammy Awards and is currently #8 on the Zone Music Reporter charts for world-wide radio airplay. The album was also on MainlyPiano’s annual list of “Kathy’s Favorites for 2015.” The album was produced by the legendary Will Ackerman (founder of Windham Hill Records) at his Imaginary Road Studios in Vermont. Steve currently resides in Southern CA and performs regularly at local venues in that area.

Neil Patton’s latest release, Between Shadow and Light, was MainlyPiano.com’s “Album of the Year,” won third place for Album of the Year on One World Radio, and was nominated for Album of the Year by SoloPiano.com and EnlightenedPianoRadio.com. Neil also co-composed with David Nevue the 2015 “Song of the Year” on MainlyPiano, the magnificent piano duet, “Clockwork.” Neil has a very successful teaching studio in Eugene and also teaches at New Hope Christian College. He serves part time as Pastor of Worship Arts at Emerald Bible Fellowship in Eugene. He has released four albums of original music to date, three of which are solo piano. Neil has played in Kathy’s concert series several times, and it is always a treat to welcome him back!

Please join us for a very special evening of piano music! Reservations are required by emailing Kathy Parsons at kathypiano@gmail.com. The address and directions will be furnished when reservations are made. CDs and sheet music books will be available for purchase and autographing for holiday shopping! There is a suggested donation of $15 at the door, and all donations go to the artists.
Visit the artist pages:
Neil PattonSteve Rivera