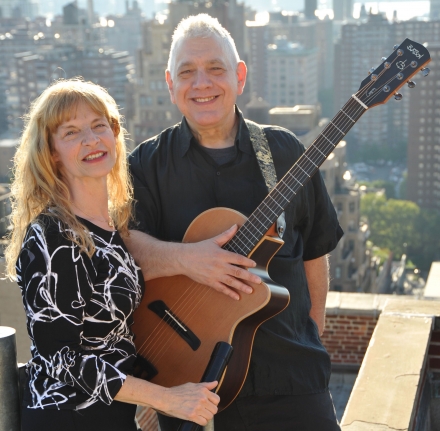 Solo Piano, Piano & Vocal, and Guitar & Vocal Concert
7pm
$15 suggested at the door
New York musicians Ed and Carol Nicodemi will be making their Oregon concert debut as part of Kathy Parsons’ House Concert Series on Saturday July 29th at 7:00 PM. This concert will be a combination of solo piano, piano and vocal, and guitar and vocal.

Having met in college, as music majors, Ed and Carol were first drawn together by their musical synergy. Years later, they are still exploring music together, always searching for the best way to interpret a given lyric or melody, still partners in their musical quest. For this concert, Ed will be playing his original solo piano pieces, with his wife Carol joining him to sing as he plays piano and/or guitar. Their musical branding could most easily be called a blending of folk-jazz with Celtic and Americana influences. They also have an original children's music CD available online and in public libraries nationwide.

Ed's new-age piano/film-score music has been heard on Dateline, NBC and The Today Show. Jazz piano great Kenny Barron and singer Pucci Amanda Jhones have recorded one of Ed's original tunes, "Trouble in Paradise,” and his piano piece, "Toy Piano,” can be heard in the movie "Fully Loaded.” Carol has honed her jazz singing with Lennie Tristano, Jackie Paris, Marian Cowings, Judy Niemack and Barry Harris. She has based her folk singing on Judy Collins, Gordon Lightfoot, and other greats. Their original and cover songs are featured regularly on Bree Noble's Internet radio show and numerous podcasts. Ed has released five solo albums (piano and guitar) as Edmond Paul Nicodemi and Ed and Carol are getting ready to release their fifth album together as a duo. For more info, go to: edandcarolnicodemimusic.com

There is a suggested donation of $15 at the door (all donations go to the artists!). The address and directions will be given when reservations are made.
Visit the artist page:
Ed and Carol Nicodemi