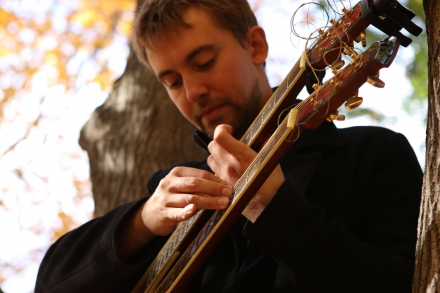 Two Neck Guitar Concert
7pm
$20
Mark Kroos will be performing a two-neck guitar concert in Kathy Parsons’ House Concert Series on Friday, May 4th at 7:00 PM as part of his 2018 national tour. Kroos is one of only a few artists in the world touring with this particular type of guitar and his concerts burst with energy and magnetism not typical of solo guitar music. Kroos’ musical influences include folk, Celtic, indie and rock artists as well as guitarists such as Michael hedges, Tommy Emmanuel and Leo Kottke. Kroos has many music videos on his website, www.MarkKroos.com/videos, including his solo performance of “Dueling Banjos” that went viral in 2013. He has won top honors in Guitar Player Magazine’s International Superstar Competition, shared the stage with some of the finest guitarists in the US and Canada, and has picked up sponsorships from many guitar-related companies. Kroos released his most recent album, Clarity, last year. He is originally from Lansing, MI, but is currently based in Charlotte, NC.

There is a suggested donation of $20 at the door and reservations are required by calling Kathy Parsons at (541) 999-9720 or emailing her at kathypiano@gmail.com. All donations go to the artist! The address and directions will be furnished when reservations are made.

This will be an exciting and unusual concert, so make your reservations soon!