I first heard David Hicken’s music in 2007-08 when he released three solo piano CDs called Goddess, Angels, and Faeries. I loved the music (still do!) and helped out with proofing two of the three companion songbooks. Then I stopped hearing from him and often wondered what happened, so I was thrilled when David contacted me late last fall with a request to review his new solo piano Christmas CD, Carols of Christmas, and to proof the songbook. Since then, David has released a “best of” collection called Serenity, which also has a companion sheet music book. A busy piano teacher who founded his own music school in downtown Honolulu, David Hicken is now taking his original music in some new directions with more orchestration, a bigger sound than his earlier music, and music videos to accompany the music. We talked about all of this and more in this interview, so enjoy! 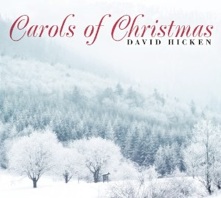 KP: Hey David! It’s very cold and dreary over here right now, so I’m a little afraid to ask how things are near Honolulu?


DH: Well, it’s a little dreary over here right now too, but this doesn’t happen too often, and in a couple of days it will be back to sunshine and blue skies. I think the weather in Hawaii is perfect and it’s one of the many reasons that I love living here.


KP: We did an interview back in 2008 when you had released three CDs in quick succession and followed them up with piano songbooks. Then you disappeared (from my radar anyway) until you released your wonderful Carols of Christmas CD late last year and blew me (and a lot of other people) away with your arrangement of “The Bell Carol” (“Carol of the Bells”). Did you take five years away from music in that period of time or were you working on other projects?


DH: During that time I was Director of Music and organist at an Episcopal church, as well as choir director at a private girls school in Honolulu. I conducted performances of Vivaldi’s Gloria, Bach’s Magnificat and Pergolesi’s Stabat Mater, as well as many others, and along with a full load of piano students it didn’t leave any time for composing. I am no longer directing, so I have much more time for writing new music.


KP: I should have guessed that you weren’t sitting around watching soaps and eating bon-bons for five years! You founded The David Hicken School of Music fairly recently. Where is that located and how is that different from being an independent piano teacher?


DH: My music school is located in Downtown Honolulu across the street from the Royal Palace. At one point, I used to teach seven days per week, but now it’s down to just a couple of days, as I have other teachers who work for me. We hold classes in music theory, music history, composition, ear training etc. and prepare our students for Royal Schools of Music examinations. We conduct private lessons also.


KP: Do you just teach piano there or are other instruments included?


DH: I teach organ as well as piano, although there’s less interest in the organ these days. I also teach voice and composition and help people with software such as Sibelius, Logic and GarageBand.


KP: I understand your daughter is quite the up-and-coming pianist. What kinds of music does she enjoy playing, and where do you see her going with her music?


DH: Anna is now nine years old and is quite comfortable playing Bach 2 & 3 part inventions as well as works by Mozart and Beethoven. She started when she was just 3, and now she is used to practicing her scales daily as well as working on her music theory. She really loves music and she plays violin and sings too. She says she wants to become a musician, and I don’t think she’ll have any problem finding a successful career in this field. 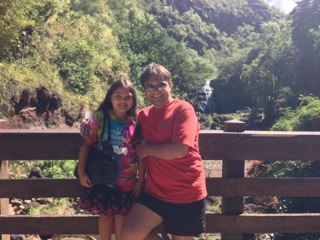 KP: Didn’t she play a jazz piece for her most recent recital?


DH: Yes, she played “Dizzy Fingers” by Zez Confrey for our Christmas recital. I was impressed that she played it all from memory, as it has a LOT of notes.


KP: That’s a workout for a seasoned pianist, let alone a 9-year-old!

Goddess, Angels, and Faeries were the three albums you released in 2007 and 2008 and they are still among my very favorite albums. Did you come up with those themes with your young daughter in mind? If not, what gave you the idea for those titles? 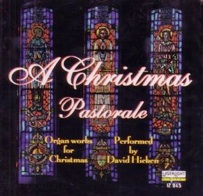 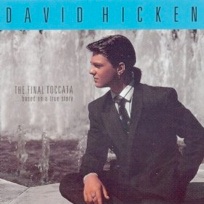 DH: I found some inspiration by reading Grimm’s Fairy Tales to Anna at bedtime. I would also tell her a little about the Roman Gods and Goddesses, so it all came together really.


KP: Those weren’t your first albums, though. You were primarily an organist and actually played for the Queen when you were in your later teens. Tell us about that experience.


DH: Yes, the organ was always my primary instrument and my first love, although it did inspire me to delve into the world of synthesizers. I performed for the Queen at St. George’s Chapel, Windsor Castle when I was 18. I performed a program of Bach, Widor, Vierne and Duruflé, and although it was a little nerve wracking, it was a tremendous success.


KP: I reviewed the very powerful Symphony Gothique quite recently and loved listening to it full blast in my car driving between Central Oregon and the SF Bay Area. How old were you when you recorded that album?


DH: I was 26 when I released Symphony Gothique.


KP: Have you composed music for organ as well as piano?


DH: As much as I love the organ, I have never written any music for it. I’ve certainly improvised a lot during church services, but never felt compelled to write anything for the instrument.


KP: You’re an amazing organist! Do you plan to do any more organ recordings?


DH: Although I will be incorporating the organ in future recordings of my own works, I have no plans to make another organ CD per se. KP: Some of the carols on your Christmas album have a very big sound that is very different from your earlier solo piano recordings. I have to say again that “The Bell Carol” is a mind-blower that I absolutely love. You have sent me some samples of new work that you are doing and that big, glorious sound continues. Do you have any idea of how and why your style is evolving in a different direction?


DH: I prefer a bigger sound, which could be due to my background as an organist. I love the big Toccatas and Fantasias, and Widor’s Symphonies for organ are some of my favorite pieces of music. My previous piano CDs began as improvisations and all came to me very quickly. I never actually set out to write solo piano music, but it just happened. Now I’m composing more deliberately, and I enjoy layering the sounds together.


KP: Are you going to continue with solo piano or do you plan to add more instrumentation and orchestration to your music?


DH: I’m not entirely sure yet. My primary focus is to add orchestration, but on occasion I’ll come up with something that I really like and feel would work best for solo piano. I will probably do another solo piano CD, but as a side project. My current works are a little more symphonic in scope (although not in the classical sense).


KP: Your “Bell Carol” video was quite an undertaking and you weren’t at all sure the weather would cooperate with the video shoot. Tell us about it. DH: We’re very fortunate to have beautiful weather in Hawaii all year. We do get some rain during the winter months, but nothing much to complain about. However, on the day before the shoot, the heavens opened. We had forked lightening (very rare here), torrential rains and VERY strong winds. A lot of planning had gone into shooting the video and I assumed it would be a no-go, but amazingly, the following morning we found that the skies had cleared a lot in the very area we wanted to shoot. We could see ominous clouds in the distance, but it remained clear for a few hours and we were able to film successfully. It was very windy however, and at one point, I thought it might blow the piano lid over to one side. It was tough keeping the cameras steady, but we made it work. 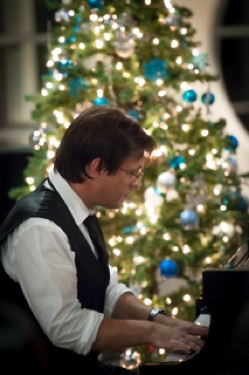 KP: Since I did so much raving about “The Bell Carol,” several people asked me about the storyline of the video. I wasn’t sure, so I’ll ask you about it. For anyone who hasn’t seen David’s “Bell Carol” video, it is still on his website, and on YouTube.


DH: The idea was to have the story be a dream. A young lady discovers an old music manuscript and plays a few notes on the piano. She then enters a dream where she witnesses a performance of this piece. Later, she finds herself in the woods where she falls asleep in her dream. It was a challenge to fit all of our ideas into just a few minutes. We also had time constraints and had to film in just one day.


KP: Thanks for that. You recently released a “best of” album called Serenity that draws from your first three solo piano albums. How is it doing?


DH: Serenity is very popular - particularly in spas. Many massage therapists enjoy playing it for their clients. I chose “fan favorites” from Goddess, Angels and Faeries, and people tell me that they like to have them all together on one CD. 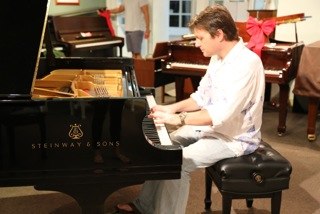 KP: It’s a great album! Do you plan to do much concert touring this year? We have a tentative date for the second half of April here in Florence, and I’m REALLY looking forward to it!


DH: Yes, there will be concerts this year, and I’m very excited to get out and perform. I’m still firming up my schedule, and will put it on my website when it’s ready.


KP: Are you still teaching a lot as well as composing? DH: Just a couple of days a week now, but they are very full days of teaching. I now give myself more time for composing, and feel that I have a better balance in my life.


DH: We’ll be making another video over the next couple of months which I’m excited about. I’m looking forward to sharing my new material with my fans.


KP: Where do you see yourself in the next five years?


DH: I see myself continuing to be content by writing new music and sharing it with the world. I’m looking forward to doing more traveling, too.


DH: I’m working on some new music that is orchestrated, but still features the piano. It will also incorporate some Hawaiian elements such as chanting and polynesian drums. I’m excited to create the new video for this piece.


KP: Something to really look forward to! Thanks for chatting, David!
For more information about David Hicken and his music, be sure to visit his website as well as his Artist Page here on MainlyPiano.com.
David's Artist Page • More Interviews