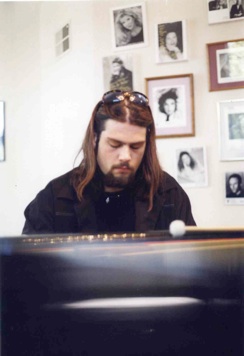 Most artists begin their performing careers playing in humble venues, but Dax Johnson is the only one I’ve heard of who actually loaded his 450-pound upright piano into the back of a van and traveled around the Pacific Northwest and beyond, playing on street corners for change wherever he could find an audience! Things have improved dramatically in the past few years, and Dax recently returned to those same cities in Washington, Oregon, Idaho, Arizona, and Montana where he was a street performer and played indoors in clubs and bookstores. At 24, Dax is one of the younger performers of the so-called “new age” genre, but he prefers to call his music “neo-classical”. Built around the emotional highs and lows of a turbulent life, Dax’s music is uniquely his own, and really brings no other composers to mind. Accessible and melodic, the music is often dark and brooding, taking an upswing somewhere near the end of the piece. His music has been inspired by dreams; by his little daughter calling him “Dad” for the first time; seeing an ultra-sound of his unborn son; the cold early-morning rain and flashing signal lights of downtown Eugene, Oregon; the mood swings of manic depression; and on and on. Rather than taking the credit for these inspirations, Dax claims that all music already exists, and he is merely a vehicle for bringing it to life. He idolizes George Winston, but cites JS Bach and Metallica as other major influences.

A self-taught musician, Dax started “pushing piano keys” at the age of two. His grandmother is a piano teacher, and begged Dax to let her teach him to read music, but he turned the tables and instead spent the session trying to get her to compose music in her head. She gave up. Dax started composing at five, amazing his family by consistently playing his pieces the same way each time. He says he loses things constantly, but never forgets a piece of music. The teen years are difficult for everyone, but Dax’s obsession with music and the piano evolved into a diagnosis of manic depression (bipolar disorder), and then years of drug and alcohol abuse. By the time he was 21, he was completing his seventh stay in a treatment center. He hit bottom when he found himself pawning his beloved piano for drug money, and turned his life over to a higher power. Music and religion are now his “drugs” of choice, and life has been on a major upswing for the past couple of years.

Although Dax usually tours as a solo pianist, he frequently performs with a painter, Marcus Bausch. They met when Dax provided the music for a gallery opening of Bausch’s artwork, and they really hit it off. When they started performing together, Bausch painted Dax’s piano as he played. Now he paints on canvas onstage, and has sold many of those paintings after the shows. He also did the artwork for the “Merciful Dwelling” CD. Recently voted one of the favorite performing artists in Spokane, Washington, Dax can also claim to have sold the most tickets for a solo performance at Spokane’s Met Theater. He also made his California debut in March, playing for my students in Hercules!

A free spirit with darkly handsome good looks, Dax’s easy humor and quick smile make him an engaging performer. Preferring to stay independent, Dax knows that the road will be long and difficult, but his talent and drive could very well take him to the top!
This was written as a profile for Wind and Wire in 1999. For more information about Dax, visit his website and his Artist Page here on MainlyPiano.com
Dax's Artist Page • More Interviews