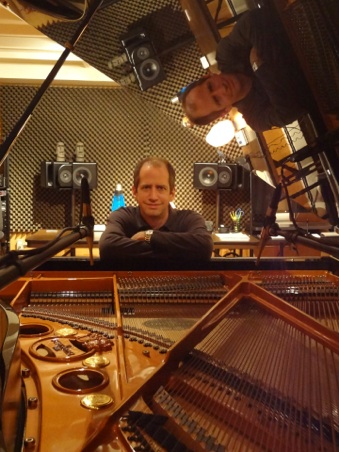 Pianist-composer-arranger-orchestrator Doug Hammer is one of those rare artists who can do just about anything. I had the pleasure of meeting Doug and seeing him play live a year ago in Southern California, and then hosted him in a house concert here as part of his Pacific Northwest Tour this past September after reviewing his music over a period of almost nine years. This is our third interview, following interviews in 2014 and 2011 (which are still available on MainlyPiano.com). Enjoy learning more about Doug, what he has been up to the past two years, and what’s coming up.


KP: Hey Doug! How are things in Boston? I’ll bet you’re looking forward to some warm sunshine in Southern CA next week!


DH: Things are chilly here but will warm up soon on the Left Coast! What I like about cold New England winters is that you spend a lot of time indoors cocooning which makes a nice environment to work on new music. When the weather’s nice, I’d rather be hiking which is where I get some of my inspiration. I recorded Haiku and Christmas Lights last winter and early spring.


KP: It’s not nearly so cold here on the Oregon Coast, but I’m still looking forward to a few sunny days without all the rain we’ve been getting. Looking forward to seeing you and so many other pianist/composers at both the NAMM Show and the Whisperings All-Star Concert and Awards Show next weekend! 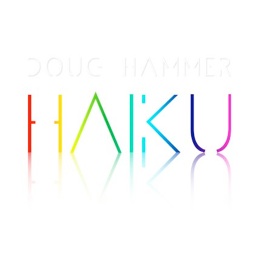 Click the image above or below to read the reviews. 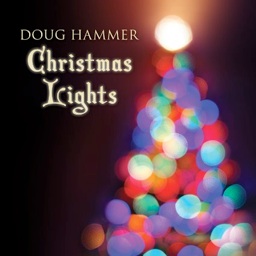 It sounds like 2015 was quite a year for you that included two CD releases and a tour of the Pacific Northwest. What were some of the highlights for you? 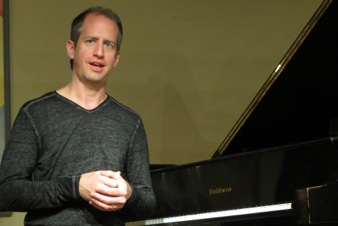 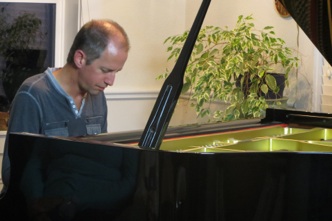 House concert at Kathy's in Florence, OR. September 2015.
KP: I love both albums and Christmas Lights is on my Favorites for 2015 list. What’s coming up in 2016?


DH: I will be working on lots of new music with a new album release later in the year. I have many album ideas and so right now I am dabbling in a few of them and seeing which one grabs me first. I will also be releasing more sheet music from Solace, Travels and Christmas Lights.


KP: Oh good! Can’t wait!!! What kinds of new music are you working on?


DH: Ah, that’s top secret, Kathy! Let’s just say it’s not all solo piano. I will be releasing a number of solo piano albums in the future, but I am also mixing it up with other instruments on some future albums as well.


KP: That should be fun! I know you did an orchestration for Brad Jacobsen (“Autumn Walk”) and one for Tim Neumark (“Beginnings”), both of which were incredible. Are you doing more of that kind of music as well?


DH: I will be. I also orchestrated Joe Bongiorno’s album, Synfonia. He left such wonderful space for me to fill with other instruments, and it’s such melodic music. I’ve enjoyed each project I’ve done with other artists. I plan on orchestrating some of my music as well. I love the palette of sounds and colors you can get with an orchestra.


KP: How could I forget Joe’s album? That is one beautiful recording!

You mentioned that you plan to do a lot more sheet music. Do you plan to work on one album at a time or mix it up?


DH: I have three songs left on Solace to transcribe. Then I will finally release the full Solace songbook (also in printed form). Then I will choose more selections from Travels and also Christmas Lights.


KP: Sounds great! You do all of your own transcriptions, don’t you? 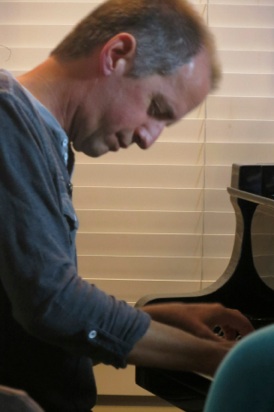 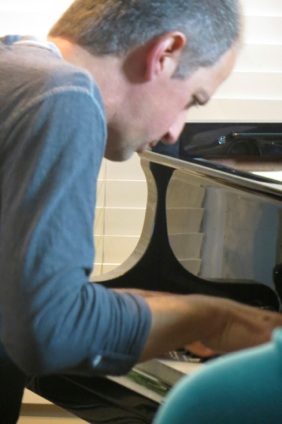 DH: Yes, and I’m very meticulous about it. It’s a painstaking process, but the results are worth it. I want people to have the right notes and fingerings and so forth, complete with tempo and dynamics. And your proofreading is the icing on the cake Kathy!


KP: Thank you! You do a great job!
It seems like each of your albums has been very different from the others. What inspires you?


DH: Life. I like to say it’s all input, just like that robot from Short Circuit, Johnny Five. Input! Input! It can be something someone does or says, a book or movie, a walk in the woods, a picture, an event, a dream…


KP: Do you wait for inspiration to knock you upside the head or do you sit down and say, “It’s time to work on some new music”?


DH: I just go for it. That said, I can sit there and create something lackluster, but so what? I throw it out and just keep at it. I try not to judge the process. Things congeal over time and then at the end, I don’t know how it all happened. It’s a very mysterious process for me. I try to get my mind out of the way and just let it flow. 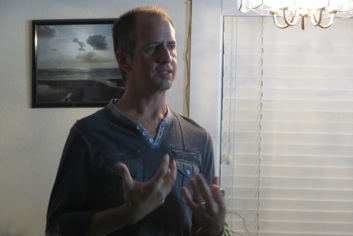 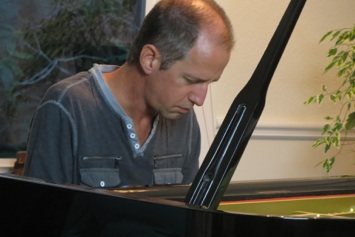 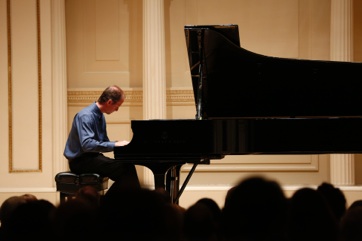 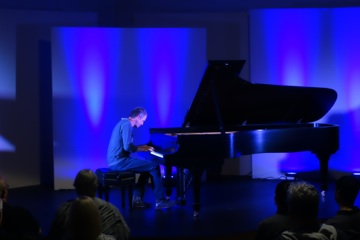 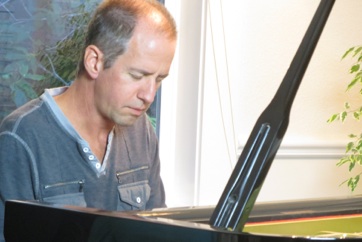 KP: That sounds so easy, but it isn’t! Do you record all of your improv time?


DH: No, but if I’m onto something, I’ll grab my phone and record it. And maybe record a few more development takes of it.


KP: How do you decide what to put on an album?


DH: I start with a concept and go from there. My creative process is different for every album. I never like to work the same way. It keeps me on my toes.


KP: I have found it really interesting that many of the composers I know have very different processes when it comes to naming their pieces. How do you do it?


DH: Naming a piece is usually the last thing I do. I’ll come up with ideas and call them something like “Idea 1/14/16.” Towards the end, after recording them, I get a feeling or mood from the piece and the title comes to me. Or sometimes I have images in my head while I am working on them. That affects the title. I will be working on an album where I am starting with all the song titles and I’ll be composing to those titles which is backwards for me, but again, I like to mix it up. And this album has a story and arc so the titles needed to come first.


KP: One might think from just listening to your music that you’re a very serious, subdued person, but you are one of the most quick-witted and funniest people I know. Where does that come from?


DH: My Dad exposed me to British humor like Monty Python and that broadened my horizons. Also the great comedians like Laurel and Hardy, Abbott and Costello, Buster Keaton, etc… I think I got a lot of my sense of humor from my Dad. I also like to keep people guessing and on their toes. Was he serious or joking? Ambiguity! And it’s a great exercise to stay sharp. I think it’s good to stay sharp and aware, plus it’s fun. In truth, I am a closet comedian. I love to make people laugh. Laughter is so healing. Comedians are healers. I put them high on pedestals. It’s such a lovely (and needed) profession.


KP: You are so right about that! When you were here in Florence last year, we had some deeper conversations, but it’s the joking around and laughter that was really memorable.

You mentioned to me that you like to talk about sound and color. Let’s do that. I very definitely see a lot of colors in music, but my background includes a degree in art, so it seems natural that the visual and aural would blend. How is it with you?


DH: I view color and sound as the same thing. For example, our “A” is usually 440Hz. It’s also 880Hz and 220 Hz doubled or halved. If you keep doubling, the frequency will be so high, it will become a color. Colors are indeed frequencies. It’s all part of the same spectrum. When I hear notes, chords, music, I don’t really see a color in my mind, but I do view keys as colors. Some are brighter and some are darker. Some are warmer and some are cooler. For me, I love the cool colors, the blue - green spectrum. And my favorite keys happen to be “G” and “D”, one sharp and two sharps. I just gravitate towards those keys. I made that connection and then realized their relationship to color for me. Sometimes I want a darker key, like Ab or Db. It’s quite amazing how you can shift by a half step and get a completely different sound. I have perfect pitch. Sometimes people ask how I know the notes. It’s like this: I look at a color and I know it’s red, blue, green, etc… I don’t have to guess what color I am looking at. It’s the same with notes. It’s all frequencies.


KP: I hadn’t really looked at it that scientifically, but it makes total sense. And yet so many people will look at you or me like we’re babbling idiots when we go there. I think all of the arts are so related and are simply different media for expression. We draw from the same wells, but express it differently. I see colors in written word and dance, too. I hear sounds with them, too. The mind is an awesome and amazing thing that is universal, but is a little (or sometimes a lot) different for each human being.


DH: You are so right Kathy! In the end, it’s all energy and can be bent and focused in so many ways; an infinite number, actually. For me, it’s about communicating emotions, sharing with others. Music is indeed a language and I feel so blessed to be able to do it. And with each bit of praise I receive, I resolve myself to work harder and harder; to be worthy of it, and to continue to grow… 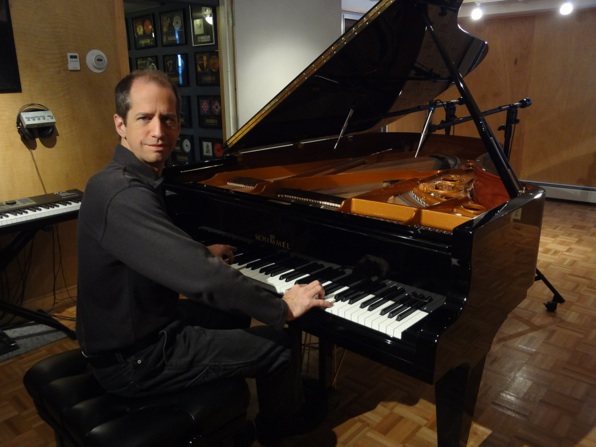 Many thanks to Doug Hammer for taking the time to chat and for getting me back to doing artist interviews! For more information about Doug and his music, be sure to visit his website and Artist Page here on MainlyPiano.com.
Doug's Artist Page • More Interviews