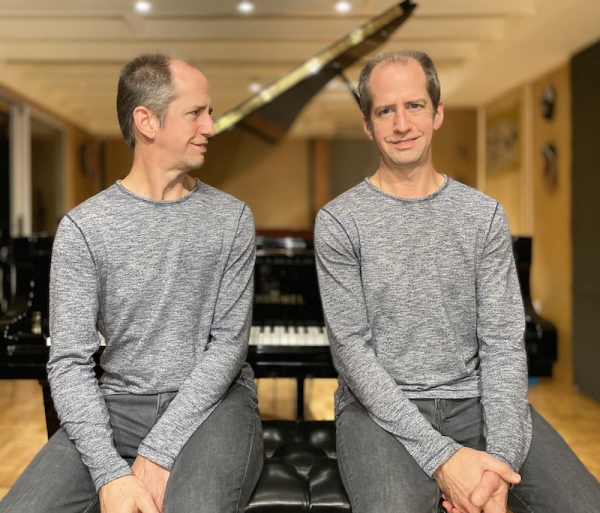 Doug Hammer is an artist who never does anything the same way twice. For his latest album, Piano2 (Piano Squared), he created fifteen piano duets that he recorded with himself playing both parts! When I asked him about that, he admitted that there are two of him, although he doesn’t have a split personality and he doesn’t have a twin. I thought it was time to get to the bottom of this and set up an interview with both Dougs. Enjoy!


KP: Hey Dougs! I’ve been reviewing your music since your 2007 debut, you’ve played in my house concert series, we’ve done several other interviews, and we’ve met up at several Whisperings events. I never knew there were two of you! It often sounds like you are playing with four hands, but what gives? Why has this been a secret for all these years?


KP: What a great cover-up! You released your newest album the last day of 2019. It’s called Piano2 (Piano Squared) and is fifteen piano duets performed by the two of you. What was the inspiration for the project? 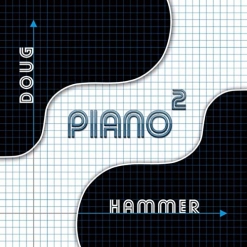 Click on the album cover to go
to Kathy's review.

DH2: Sure. So I’ve toured all over the country with many wonderful pianists and I always look forward to the finale at the end of the concert where we improvise and jam out. I also do a lot of studio work and sometimes I play stuff on the piano while listening back to tracks. That got me thinking, how about an album of duets where I play both parts?


DH1: Well, I play one part, the lower half of the piano.

DH2: Correct. And I play the top half of the piano. We try not to interfere with each other.


DH1: Yes. It’s about coming up with two parts that complement each other. 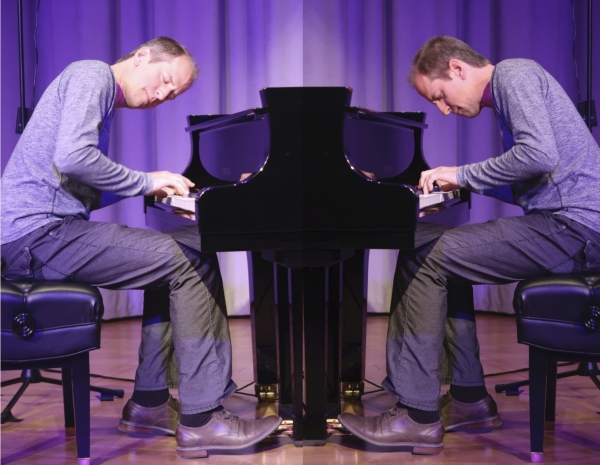 KP: What is the meaning of the album’s title?


DH1: Well, it’s a piano and a piano. Now I know that one squared is one, but two squared is four. So four hands on two pianos.

DH2: Why two pianos? Because we do different pedaling. Sometimes DH1 is sustaining and I’m not.


DH1: And sometimes DH2 is sustaining and I’m not!


KP: How did you go about composing the duets?


DH1: Usually, I would start by laying down a groove with bass and accompaniment.

DH2: Then I would listen to that and add a melody and sometimes a solo. I would also add some chords as well, depending on the style.


DH1: I would go back and listen to the melody and do a better job accompanying that. Most of the songs were recorded to a click track so the tempos would be accurate and we could seamlessly play together.

DH2: Right. And after the accompaniment was refined, I would go back and rework the melody and improvisations on top. 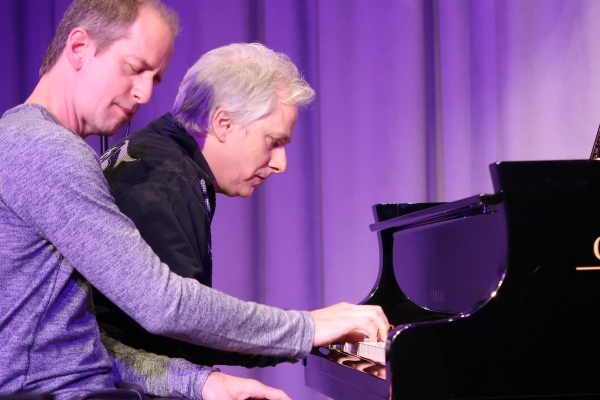 Doug and Joseph Akins improvising a duet at Whisperings 2018 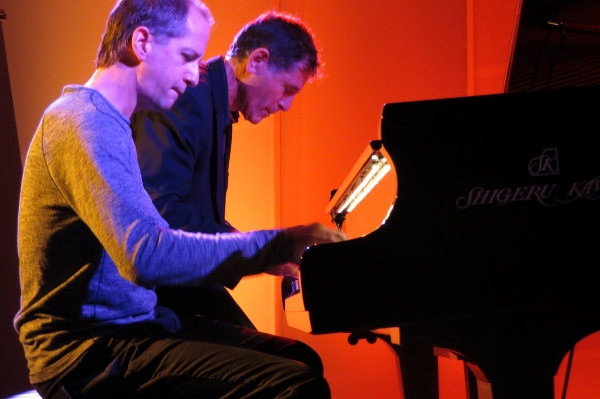 Doug and Louis Landon at Whisperings 2017. 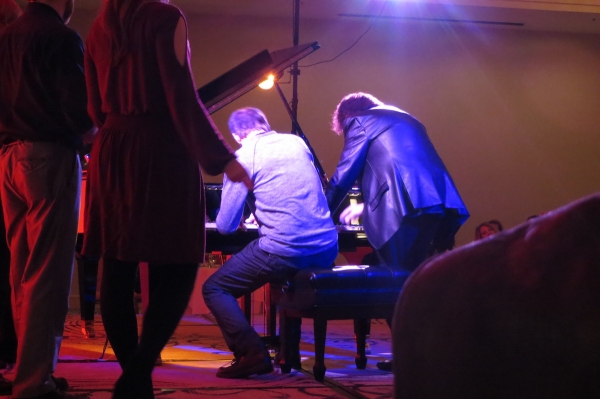 Jamming with Patrick Moraz at Whisperings 2017.
DH1: It was definitely a give and take.


KP: That always works the best! I know you have a very sophisticated recording studio, but how did you record the duets so flawlessly?


DH1: Mainly through having a click track. Normally I don’t like them as I believe in organic tempo, where the tempos can ebb and flow a bit.

DH2: Yes, but for this project, the click track worked very well keeping us together. Then we would both work on feel to make sure nothing sounded mechanical.


KP: Did you use one or two pianos?


KP: So far, the videos I’ve seen for the project have the two of you playing air piano. Are you going to do any of you actually playing the piano or pianos?

DH2: We’ve thought about that and it is certainly doable. We’ve both been very busy since finishing the album, but we think we’ll try it out and see how it goes.


KP: Will there be sheet music for the project?


DH1: There will not. We’ve had a number of requests but we both feel our time is better spent plowing into new musical projects.

DH2: Yes. You really need two pianists to pull this off and would rather catch up with other sheet music requests, especially from our album Travels.


KP: Oh good! I’ve been looking forward to more sheet music from Travels. That’s another really great album and one of my favorites!

You are known for being able to play just about any style or genre on the piano, and you do just that on Piano2. Did you intentionally set out to do such a variety?


DH1: Yes. That was the original intention. Though we thought it would be more improvised and it turned into carefully-crafted tunes for the most part.

DH2: Yes, we do jam out and improvise, but the majority of it is more composed. That was a surprise.


KP: Are you both equally versatile?

DH2: Well, we like lots of styles of music.


KP: Are you going to perform these duets live?

DH2: Not really. DH1 played some of the pieces recently in LA but most of them don’t translate to solo pieces.


DH1: "Celtic Heart" is one exception. It’s more a solo piece but we loved it so much that we found a way to put it on this album. And a few others, like "Across the Plains," where melody and accompaniment are played by me.

DH2: And I am doing some understated embellishments on top. 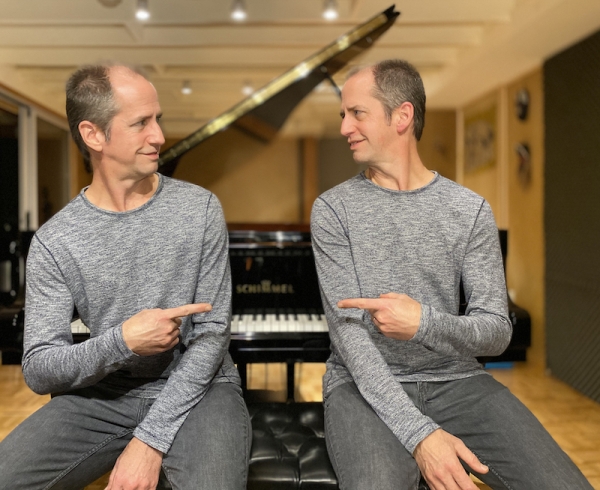 KP: Okay, Dougs, which of you is the better pianist?


KP: Who did the bulk of the composing for Piano2?


DH1: Well, the meat of the album was done by me. Bass and accompaniment mostly.

DH2: Correct. And I came up with the melodies.


KP: How did you resolve any differences of opinion on how passages should be played?


DH1: We compromised and asked each other who should take the melody.

DH2: Sometimes, we’d try things a certain way and then change it up after listening back. Definitely a give and take process.


KP: Some of the titles on the album are intriguing. What does “Shimmer In Disaster” refer to?

DH2: We really like that title. It’s about the fact that no matter how bad things can get, there is always a glimmer of hope.

DH1: And we need to hold on to that and remember. Just like Howard Jones’ song, “Things Can Only Get Better”! 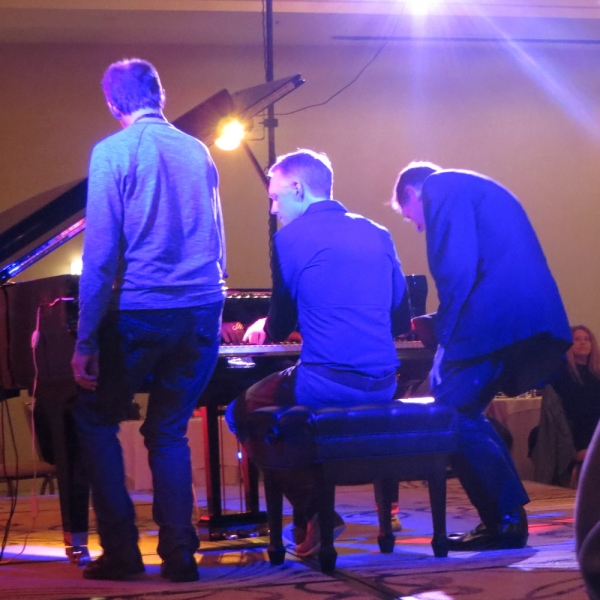 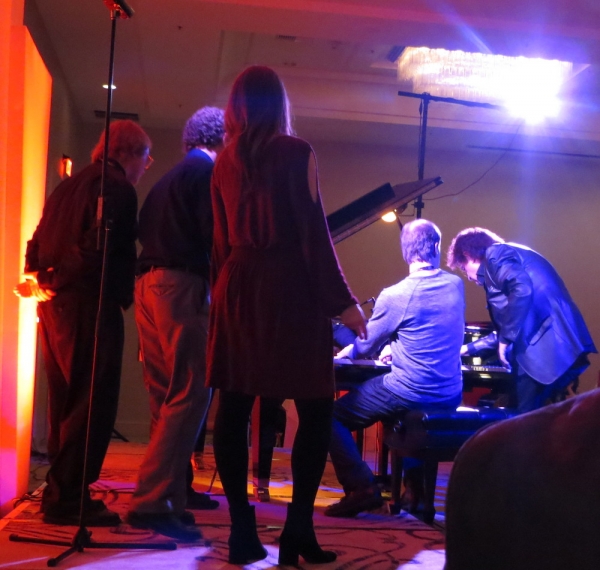 Another shot with Patrick Moraz at Whisperings 2017.

DH2: And we liked the word “shimmer” better than “glimmer.” This brief glimpse of light can change everything.


DH1: Well, we never thought we would compose a song about chasing an opossum. But it fit the music.

DH2: Yes. Growing up, we learned some novelty songs by Zez Confrey: “Dizzy Fingers” and “Kitten On The Keys.”


KP: I love both of those pieces!


DH1: Yes, they were fun but difficult pieces to play!


KP: What is “The Uncertainty Principle”?


DH1: That idea was first born using pizzicato strings. That’s why it is so crisp and staccato.

DH2: Yes. Then I composed and floated a melody on top.


DH1: And we developed the idea further. We weren’t sure it was going to work because there is implied time there.

DH2: We were going to add a shaker or something because of the syncopated accompaniment, but then it would break the concept of the album.


DH1: There may be an orchestral version in the future.

DH1 & 2: Totally. Our wife is French Celtic and we have two Celtic Breton boys. We’ve always loved this music, its purity and emotive qualities. It is real and grounded. But can be ethereal as well!


KP: You’re both married to the same woman? Isn’t that illegal???

DH2: There is science fiction, I mean science fact involved.


DH1: Right. Gotta keep it on the hush hush if you know what I mean.


KP: I’ll never breathe a word about it! What is “The Last Goodbye” about?


DH1: I have a hard time with goodbyes so I never say goodbye. I may say, “See you next time” instead.

DH2: We get attached to the way things are. Change can be hard but as we all know, it must be accepted.


DH1: There’s a yearning in the song and a fight in the realization of something ending. 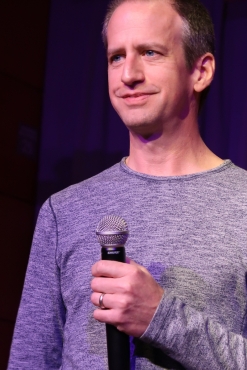 KP: Do you plan to do more albums together?

DH2: We’re not sure. I tend to do something and move on to something else. I don’t want to repeat myself.


KP: Can your wife and kids tell you apart?


KP: Hmmmmm. Other than each other, who have been some of your favorite duet partners? 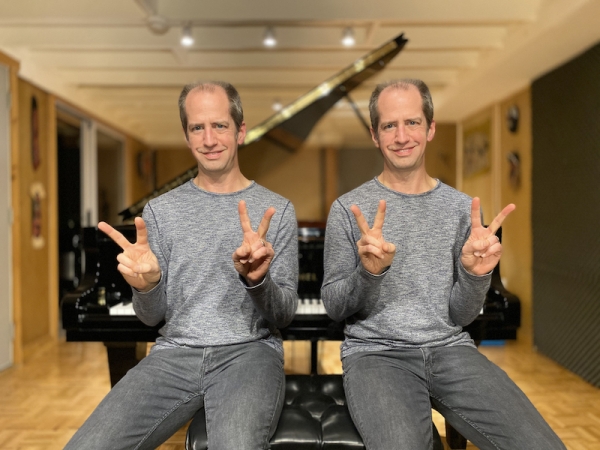 DH1 & 2: We are going to get on the same page and start something new! We have lots of ideas in the pipeline. We will also release some singles as well as albums.


DH1: I think that covers it. Stay tuned for future videos and more new music and sheet music.

DH2: Yes! And thank you Kathy for interviewing the both of us.

DH2: It certainly has!


DH1: You always get the last word.

DH2: Well you always get the last note.