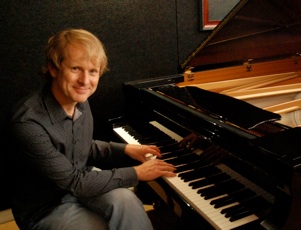 When Eric Harry asked me to review six of his CDs at once, I was really skeptical that anyone’s music would keep me interested for that long. I will happily admit that I was completely wrong, and was actually disappointed to get to the bottom of the pile. Eric has released a total of eight CDs in less than two years – an amazing feat! I have no doubts that Eric will be a major force in the new classical, solo piano, and new age music genres, so now that I’m very familiar with his music, it’s time to get to know the composer.


KP: You appear to have suddenly burst on the piano music scene with eight CDs of original music. How did you create such a huge collection of music in such a short time?


EH: Well, Kathy, my years as a composer in TV and radio advertising gave me the discipline; however, I certainly wasn't used to longer format original compositions. I was in New York days before 9/11 recording Grady Tate for a commercial. After the attacks, I felt a sense of great sadness, yet I also felt a newfound appreciation for life. I really felt I was missing my earliest love of simply writing and playing music for the pure joy of creating something magical and spontaneous rather than for the monetary gains. Hence came my first album, entitled Love Preludes. It was my nod to Lizst, Chopin, Debussy - all my childhood heroes.

In 2007, I just sat down at the piano one day and closed my eyes. Somehow, out came Tree Spirits Piano Solos. I cried after the first take. It was like I reconnected with myself. From there I just kept going. It was easy because I loved it so much.


KP: Are some of the recorded pieces from the past?


EH: I think just two pieces were older – “Prairie Whistle” and “The Innocence of Kite Flying,” both of which are on Imaginary Picnic.


KP: A lot of your music is very poignant and sad, but you seem like a very positive and upbeat person. Where does that sad feeling come from?


EH: The only explanation that I can come up with is this: We all seem to keep our emotions bottled up inside. We spend the whole day smiling, being nice – just because society says we have to. We never have a chance to express our longing, our fears, regrets or sadness. So when I close my eyes to play or write, it's more natural to express this voice. Also as composers, we do mirror what the world is feeling at that moment, and frankly, there is much strife, melancholy and sickness everywhere. But yes, odd as it may seem, I'm a happy-go-lucky person. Go figure! 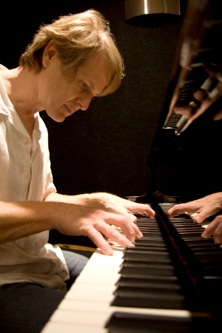 KP: I understand that Eric Harry Music is a company that provides music for Canadian and US commercials, television, and films. How long have you been doing that kind of work?


EH: My company has been producing music for TV and radio for twenty-five years.


KP: Do you have any favorite commercials that you’ve done?


EH: I would have to say that my favorites have been the Newfoundland Labrador Tourism commercials. They are spectacular visually and incredibly inspiring to write for as a result. In fact, they have been considered the world's top tourism commercials.


KP: I understand that you’ve won some prestigious awards with your music. What are some of those?


EH: Over the years I've won many Clios and a whole bunch of Bessies. In 2007, I won a silver LIA award at the London International Awards in the music and lyrics category for a commercial for Newfoundland Tourism.


KP: Is Eric Harry Music a one-man operation or do you have a staff?


EH: People always ask me that and are surprised to know that I'm the only employee. Websites are deceptive that way. It makes me look like some huge corporation.


KP: Earlier this year you launched a new internet radio station, CalmRadio.com. Tell us about it.


EH: Calm Radio was an innocent website and internet station on Live365. When I decided to start selling my CDs, I realized that there isn't a vehicle for artists like myself to sell their music to listeners connected the station. That’s when the lightbulb went off! From Live365, I launched my first iTunes stream. Having a stream gives you exposure to hundreds of listeners who would never have heard of you. From there, I realized also that I would need more artists’ material to play on the station, to increase the length of the playlists to keep it interesting. Because we’re new, our artists get more exposure than if I had two hundred other artists wanting to play their material.


KP: Who are some of the other artists on CalmRadio?


KP: Those are some wonderful artists! Did you start the radio station primarily as a vehicle for your own music?


KP: Are you seeking more artists for your roster?


EH: For sure. Just like I needed a voice, there are many artists seeking the same opportunity. I really work hard at keeping the bar raised high when it comes to performance, originality and production. I really feel that listeners can hear the difference.


KP: Now let’s talk about you! When did you start playing the piano?


EH: At seven. I had the most amazing teacher, Wilfred Charette. I went after school and he would talk about philosophy and show me his miniature woodworking shop in his apartment. I even went to the basilica and sat next to him on the pipe organ bench while he told me when to turn the pages.


KP: Do you play other musical instruments?


EH: Well, I am an accomplished guitarist; I played flute for years, also bagpipes. One of my other passions was glass music. I was pretty famous in the eighties for some of the films I did with other composers like Oscar-winner Jack Nisztche (One Flew Over the Cuckoo's Nest) and Ry Cooder (Buena Vista Social Club). My glass instruments had the lowest tones in the world. I even built special rotating tables to play the low vases.


KP: That’s a really interesting combination of instruments! How are glass instruments played?


EH: My first instruments were simple wine glasses I purchased from dime stores. You know, you play them with your index finger at weddings? Then I found these real low ones that I could close-mic to get the lowest fundamentals. However, these have to be played with two fingers! So, I built a rotating table for that. Next, I bought two glass armonicas from Finkenbeiner in Boston. They were invented by Benjamin Franklin believe it or not. Those are played somewhat like a keyboard with all ten fingers.


KP: How long did you take piano lessons? Were you a music major in college?


EH: I took piano with the same teacher until I was 14. Then I learned jazz with Al MacLeod, who was a friend of Art Tatum's. Then I did blues, met Sonny Terry and Brownie McGee. Then I was accepted to the Arranging and Composition program at Berklee College of Music in Boston.


EH: I started writing when I was at Berklee. Some of my pieces are even in their classroom books.


KP: When you compose, do you use a lot of improvisation or do you write most of your music down? Or both?


EH: Well, my pattern seems to be to improvise first then write it out. However, on difficult pieces, I will transcribe what I recorded on audio, or from my Yamaha Disklavier grand. If my compositions need orchestration, I certainly have to arrange and orchestrate on paper.


KP: Once you have decided that a piece of music is ready to record, do you play it about the same each time or does your music evolve as time goes along?


EH: To be honest, most of my pieces are first takes, and I have no idea where I'm going. I have no idea how I do it, Kathy. What baffles me is that I can maintain the same motif at the beginning and the motif at the end. Maybe other composers can do that, but to me it's unexplainable. However, I can usually remember what I played for some unknown reason.


KP: Are you doing sheet music for your music, too?


EH: I wish I had the time. Perhaps I should get someone to transcribe my recordings,although I have hand-written scores for a lot of them.


EH: Three people! First would be my earliest music teacher, Wilfrid Charette, who nurtured me and had the patience to keep me as a student. Next would be Liberace, believe or not. I remember playing his record on the stereo and pretending I was the conductor. Third, I would say that David Nevue has changed my life like no one has before. Here is a guy who had no training (I think) and gave a voice to many, many artists who otherwise would have never been heard. I stumbled upon his name completely by accident.


KP: David is a very good friend of mine, and he’s very inspiring in a whole lot of different ways. He very clearly demonstrates that one person truly can make a difference! Who are your favorite composers? 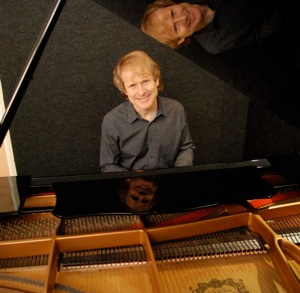 KP: Who are some of your favorite contemporary artists?


EH: I'm inspired by so many, but Will Ackerman, Wayne Gratz, Fiona Joy Hawkins, Michael Whalen, Michael Logozar...geez..I could go on and on.


KP: I know what you mean! Do you do concert performances?


KP: Do you plan to perform with the Whisperings Artists?


EH: Wow, that would be an honor! Maybe you can put the suggestion to David, Kathy!


KP: I will! Your first two albums were variations of the same music – Tree Spirits. One is mostly solo piano and the other is orchestrated music behind spoken word by Terra Martin. How did those two projects come into being?


EH: Tree Spirits Piano was so loved by my award-winning poet and philosopher friend Terra Martin that we decided to try to it. She is, to me, the most inspiring writer.


KP: What are you currently working on?


EH: Excitedly, I am just about to start another album. However Calm Radio is growing at such a fast pace that I find myself wearing several hats: artist, tech support, web designer, radio programmer, and not at the very least, running Eric Harry Music.


KP: Do you have any New Year’s Resolutions?


EH: To write an album every month, like I promised myself when I started two years ago. And to perform this year for sure!
To learn more about Eric Harry and his music, visit CalmRadio.com, iTunes, Amazon, and his website. Also check out Eric’s Artist Page right here on MainlyPiano.com
Eric's Artist Page • More Interviews