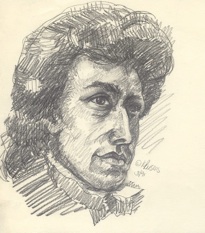 Chopin is one of a small number of composers who was recognized in his own lifetime as a master and who was able to live well from the money he made composing music and playing concerts. He is also one of the only masters who wrote nearly all of his music for the piano. Chopin is frequently referred to as “the poet of the piano.” He was often ill and weak, and in the letters he wrote near the end of his life, he frequently called himself “old.” He lived to be only thirty-nine, but in his short lifetime, he composed some of the most beautiful music ever written. Much of his music is difficult to play, but there are very few concerts of classical music that do not include at least one of his pieces.

Frederic Chopin was born in Zelazowa Wola, Poland on either February 22 or March 1, 1810. He was the second of four children, and the only boy. The family was a close one, and Chopin stayed in contact with his parents and his sister, Ludwika, all of his life. Chopin was already an excellent pianist by the time he was six, and his teacher taught him the music of Johann Sebastian Bach. By the time he was eight years old, Chopin had already had his first piece of music published. He continued to study composition until he was eighteen, and his teacher encouraged him to develop his unique composing style.

Chopin’s style of playing the piano was completely original, and, like Beethoven, he challenged many of the rules and traditions of composing and playing. When he was nineteen, Chopin went to Vienna to perform a successful series of concerts. He was already being criticized for playing too quietly, but most of the comments in the press were very favorable. It is interesting to note that even someone as great as Chopin was nervous about how his concerts would be reviewed. He wrote to his family: “I decided that if the papers should so smash me that I could not again appear before the world I would take to interior housepainting; it’s easy to smear a brush across paper, and one is still a son of Apollo.” Chopin continued to tour parts of Europe, and audience reaction became more favorable and enthusiastic with each concert. His letters are full of joy and optimism with just a hint of loneliness. He returned to Vienna in 1830 and stayed there for about a year. In a letter, he described his amazement at going to the Imperial Library to study some old music manuscripts and finding a book of his own music! Life wasn’t always so happy, though, and some of Chopin’s diary entries of 1831 show some very deep bouts of depression. He even wrote several times that he wished he was dead. 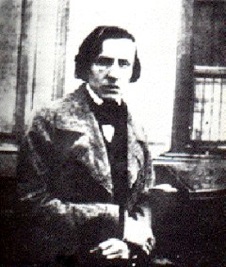 Later in 1831, Chopin moved to Paris. He attended concerts as often as he could and became enchanted with the playing of Friedrich Kalkbrenner, one of the most popular pianists of the time. Although Kalkbrenner’s style was completely different from Chopin’s, Chopin decided that he wanted to learn to play like the older man. Kalkbrenner told Chopin that he had talent and that if he would study with him for three years, he could turn Chopin into a fine artist. Chopin thought this was a wonderful opportunity, but his parents and former teacher were horrified and sent letters pleading with him not become Kalkbrenner’s student. Eventually, Chopin decided they were right and made his Paris debut a few months later. He immediately began to move in high society and soon had more students than he could handle - many of whom were princesses and countesses! Chopin charged high fees and was able to live a fairly luxurious lifestyle. He became friends with Felix Mendelssohn, and met Robert Schumann (who idolized him) in 1834. He also became acquainted with Franz Liszt, who introduced Chopin to his future girlfriend, writer George Sand (Aurore Dudevant). Chopin, Mendelssohn, Schumann, and Liszt made up a strong core of the Romantic movement in music.

For Chopin, life in Paris was filled with composing, performing, visiting friends, and writing to loved ones in Poland. At this time, he seemed relatively happy and excited about how his career was progressing. Sometime in the late 1830’s, Franz Liszt introduced Chopin to George Sand, a woman who was a successful author. Her real name was Aurore Dudevant, but Chopin always referred to her in his writings as Madame Sand. She was divorced, had two children, and was six years older than Chopin. She often wore men’s suits and smoked cigars. Chopin was at first put off by her independence and lack of conventional manners, but by 1838 they were living and traveling together. They spent time at her homes in Majorca and Nohant, and at his in Paris. They spent the winter of 1838-39 in Majorca, where Chopin finished his series of twenty-four preludes. He wrote to a friend that his life was “glorious,” but his health started to deteriorate as his lungs weakened from the cold, damp weather.

Chopin’s and Sand’s relationship lasted for nine years and ended abruptly. Sand was a woman who had to have things her own way, and it seems that the more successful she became, the more she rejected those she loved. She was furious when her daughter, Solange, married a sculptor in 1847. Shortly after the wedding, a dispute erupted, and Sand threw both of them out of her home. Chopin took Solange’s side, so Sand kicked him out, too, and refused to answer any of his letters. The break was devastating for Chopin and left him bitter. He continued to have a close relationship with Solange, who was heartbroken by her mother’s actions. Mother and daughter were able to have a lukewarm relationship after several years of Sand’s refusing to see Solange, but Chopin and Sand never saw each other again.

Chopin had become a very sick man and was in the final stages of tuberculosis. His emotional state was also in shambles. In 1848, the Revolution broke out in Paris, and most of Chopin’s students fled, leaving him without a regular source of income. He was unable to compose and he wrote of frequent bouts of “blood spitting.” He performed now and then to earn money to live on, but his lack of strength prevented him from playing many concerts. He accepted invitations from friends and former students to visit England and Scotland, but since he could not speak the languages, these trips only deepened his depression. He did play a few concerts for some of the European aristocrats, but once he fulfilled his obligations, he returned to Paris. He was too weak to compose or play the piano, and wrote to his sister, Ludwika, asking her to come stay with him. George Sand wrote to Ludwika that she wanted to visit Chopin before he died, but Ludwika never answered the letter. Ironically, Sand’s daughter was at Chopin’s side when he died on October 17, 1849. His last words are recorded as being, “Play Mozart in memory of me.” The last words he wrote were in pencil on a sheet of letter-paper: “As this cough will choke me, I implore you to have my body opened, so that I may not be buried alive.”

Chopin was one of the greatest artists of the Romantic Era (about 1820-1900). He had his roots in Classical music, which was much more restrained and unemotional. He blazed his own trail and composed to express his feelings rather than to please the critics. Knowing some of the sad events of his life makes it easy to understand why so much of Chopin’s music has a feeling of tragedy about it. Chopin’s music has never gone out of style, and nearly all of the music he wrote is still easily available. He rarely gave distinctive titles to his pieces - most have “generic” names that need their opus numbers and/or the key they were written in to be identified. He wrote twenty-four preludes (short, free-form introductory pieces), twenty-one nocturnes (night songs), sixteen polonaises (dramatic Polish dances), twenty-seven etudes (pieces that work on specific techniques or problem areas in piano playing), four ballades, four impromptus (longer free-form pieces), three sonatas, many waltzes and mazurkas, as well as several concertos and numerous other pieces. Chopin’s music stands as some of the greatest music ever composed.
Frederic's Artist Page • More Interviews