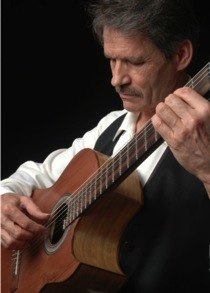 One of the wonderful benefits of hosting house concerts is getting to meet new artists as well as longtime favorites. Classical guitarist John Jarvie will be appearing here for the third time on October 7th, and his concerts are always a highlight of the season. John lives in Eugene, OR, and is something of a local celebrity. We did this interview in September 2012.


KP: Hi John! I’m getting really excited about your concert here on October 7th! What do you have planned for us this time?


JJ: I have some new pieces I’m excited about, and I plan to play some old favorites. One new piece is a set of variations on “Las Folias de España” by Mauro Giuliani, the famous 19th century Italian guitar virtuoso and composer. Also, I’ve arranged “Tango España”, by Isaac Albeniz, originally for piano, for guitar. I hope to have my newest arrangement, Schubert’s “Ave Maria” ready by October, as well.


KP: Sounds like a great program, as always! Have you done much performing this year?


JJ: I have been performing three to four times a month, mostly short concerts in retirement centers, but I played several full programs as well. An exciting event for me this year was the debut concert of the Jarvie and Thomas Classical Guitar Duo. After years of playing together for fun, Peter Thomas and I took the big step, rented a beautiful church sanctuary in Eugene, and we presented a full concert of duets. We had a very good turnout, and the response was gratifying. 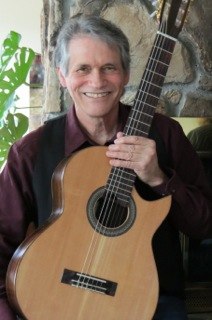 KP: When did you become interested in playing the guitar?


JJ: When I was 15 years old I heard a recording of Segovia, and it changed my life. I had been learning chords and folk songs on guitar, but I had no idea classical music could be played on guitar. Learning to play better became my passion, to the exclusion of nearly everything else, for the next five years. Since then I have been a little more balanced.


KP: Do you play other instruments in addition to guitar?


JJ: I played piano in Music School at the University of Oregon well enough to play the more basic Mozart and Clementi sonatas, but it wasn’t my passion. Although I would love to be able to play the great Beethoven works, and Chopin and Brahms.


KP: You have also had a long teaching career. Tell us about that.


JJ: I was taking lessons from Ralph Towner in my late teens, and when he left for New York with the new band ‘Oregon’, he turned his students over to me. That was my start, and I have continued to teach, first at the U of O, and later at Lane Community College, right up to the present.


KP: You also build the guitars you perform on. How long have you been doing that?


JJ: I built my first guitar while still in high school. I played it for a time, and then sold it. Years later I was visiting a friend of a friend and he was playing it. I hope eventually it disappears forever! I have built about 20 guitars over the years, mostly for my own use, but I have sold some, also. I like to experiment with original designs that expand the acoustical properties of the instrument. I am building a new design now that I may play in October, if it is successful. 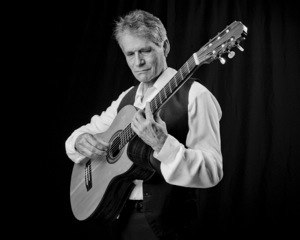 KP: How long does it take to build a guitar?


JJ: I keep telling myself to keep track of the hours I spend, but I never do. Maybe I don’t really want to know. I started this guitar in early August, and I hope to have it ready by October, but I have had some concerts. I can’t do too much woodwork when I’m preparing for a concert; the two different uses of the hands are not compatible.


KP: How many guitars do you own?


JJ: The number keeps fluctuating as I sell them. However, today I have two that I play in concert, two that I lend to students, and three available for sale.


KP: Has classical guitar always been a passion for you?


JJ: I always loved the guitar- just the sound and the shape. But when I heard Segovia play classical music on guitar, I was lost to all else.


KP: Were you ever a rock guitarist?


JJ: I played with a jazz/rock band for several years, to help pay my way through college, but my heart wasn’t in it. 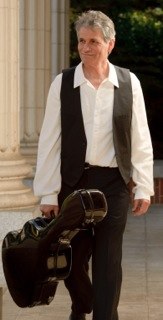 KP: Are any family members musicians as well?


JJ: My father played piano and accordion from childhood until his death at age 96. He was a very accomplished amateur, and his sensitive interpretation of music has had a profound influence on my playing. My mother loved music, and was a talented violinist as a young woman, but began to lose her hearing in her late teens and was unable to continue. Often I would come home from school and she would be listening to the stereo at full volume.


KP: One thing I especially like about your performances is that you have taken quite a few classical pieces that were originally composed for other instruments and transcribed them for guitar. Your arrangement of “Fur Elise” seems very close to the original piano solo. How do you choose which pieces to transcribe?


JJ: First, I have to love the music. Then, they have to be pieces that sound natural on guitar. With ‘Für Elise,’ my father played it, and I played it on piano first, then gradually began to develop it on guitar. This arrangement is quite close to the original, but the guitar has only a 3 ½ octave range, so some parts had to be compressed or transposed. I try to get into composer’s head and imagine how he would have composed the piece if he were writing it for guitar, rather than playing the music exactly. I don’t alter notes or harmonies, but I lay out the musical material in a way that sounds ‘organic,’ or natural on the guitar.


KP: This might be a silly question, but why is so much classical guitar music from Spain and Latin America?


JJ: This is a most interesting question. The early guitars evolved from instruments popular in Spain. The plucked string instrument family originated in the Arab culture, and was carried into Spain by the Moors, an Arab culture that ruled the Andalusia area for 900 years. When the European Spanish finally defeated the Moors, many Romany, or Gypsy, people were permitted to remain. They were not allowed to play Arabian instruments or music, so they simply adapted their music so it sounded more European, and played it on slightly modified instruments. The result of this innovation grew ultimately into Flamenco music, which is the source of what we think of as the “Spanish” sound. The Spanish guitar is one of the primary Flamenco instruments, and its use spread to the European Spanish players and composers, who adapted the Flamenco sound to their own style.

When the Spanish colonized Latin America, they brought their instruments and music. There were no indigenous string instruments in South or Central America, so the guitar filled a niche and became very popular with the native people. The music they composed became a mix of Spanish and their traditional music, which was primarily made with rhythm instruments and vocals, hence the complex syncopated rhythms typical of Latin American music. 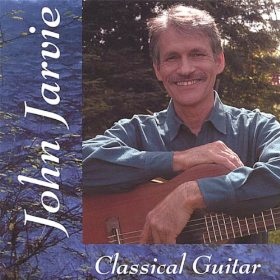 Click the album cover to read Kathy's review.
KP: That’s really interesting! You released your first CD, appropriately titled Classical Guitar, in 2007. Do you have plans to record another CD?


JJ: I don’t know. I will certainly record and release. I recently put three singles on iTunes. It may be that digital download is the coming standard.


KP: Things seem to be moving in that direction! Who and what have had the most influence on you and your music?


JJ: There have been several important influences in my musical life. First, my father, whose sensitive and unpretentious interpretations were a model for me. Segovia, whom I heard in person twice during my student days, was a revelation - I had never heard a guitar sound so beautiful. And Michael Lorimer, a student of Segovia, with whom I worked intermittently over a period of years, who showed me how to create the sounds I heard in Segovia’s playing.


KP: What has been your most exciting musical moment or experience?


JJ: There are two: Playing the Concierto de Aranjuez, by Joaquin Rodrigo with the Eugene Symphony, and opening for flautist Paul Horn at Portland Civic Auditorium.

For more information about John Jarvie and his music, please visit his website and his Artist Page here on MainlyPiano.com.
John's Artist Page • More Interviews