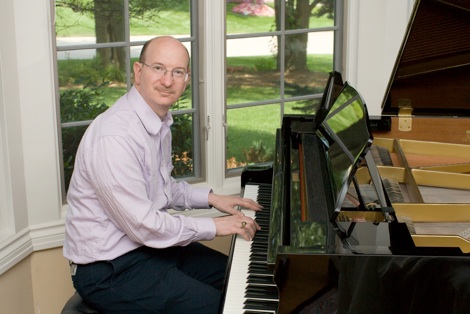 One of the things I really enjoy about reviewing new music that I have the opportunity to discover the work of artists I might never have found otherwise. I am then able to introduce the music to other people who also might not have found it otherwise. One of those special artists is Dr. Paul Fine, who sent me his first CD, Fine Tuning, back in 2006. He recently released his fifth CD of original compositions, Measuring Up, which I think is his best work so far. Much of Paul’s music has an old-fashioned feeling about it and much of it conveys the innocence of a simpler time. Some of his songs have lyrics that are often laugh-out-loud funny. He’s been writing songs since he was a child, and often composes music in honor of special events and special people in his life. Paul is a medical doctor and an associate professor of internal medicine at the University of Michigan. Obviously a very devoted family man, Paul includes his three talented children on his recordings, the most recent of which includes two pieces by his younger son, Ben. If you haven’t discovered his music already, it is my pleasure to introduce you to Dr. Paul L. Fine! 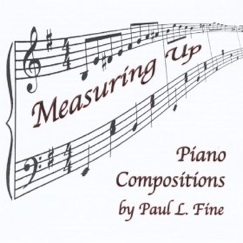 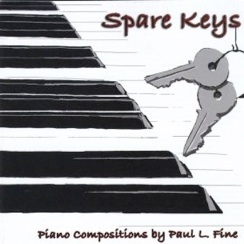 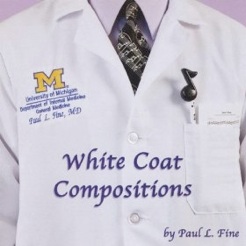 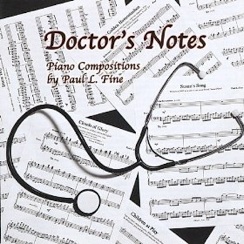 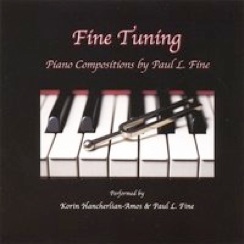 KP: Hi Paul! How are things in Michigan today?


PF: Things are a little hot today. Of course, I prefer temperatures in the 50’s-60’s, so it’s not too surprising that I find it too hot in August!


KP: You’d love it here on the Oregon Coast! You recently released Measuring Up, your fifth CD of original compositions. How is it doing?


PF: It is doing well, thanks. It’s very early yet for sales, but I have given copies to a number of my family members, friends, and patients. Their enthusiastic response has been very gratifying.


KP: I think it’s your best album yet and really enjoyed reviewing it! When did you start playing the piano?


PF: At the age of five. I have no recollection of how or why it got into my head, but I asked my parents if I could take lessons and they let me give it a try.


PF: Right up until my high school years.


KP: Do you play any other musical instruments?


PF: I started almost immediately after I began playing. In fact, my first grade class put words to one of my first pieces and made it into a song called “Let’s Go to the Bakery”! I’m sure you’ve heard of it . . .


KP: Yes! It was a big hit for somebody in the late 60‘s wasn’t it? It’s apparent that you’ve been passionate about the piano most of your life. Did you ever consider a career in music?


PF: Not really. In truth, I wasn’t a great piano student. Part of the reason, ironically, is the fact that I was able to play by ear and compose pretty well from the start. It was easier for me to sit and play what was in my head than to learn well how to read and play other people’s music. So, though I played a lot, I didn’t practice as much as I should have!


KP: Yes, I’m afraid a lot of teachers have issues when students are creative and want to do their own thing. It’s too bad. When did you decide to become a doctor?


PF: My father was a doctor and I liked the idea of following in his footsteps. I think I had pretty much decided on medicine as a career by the time I went off to college.


KP: Where did you study medicine?


PF: My medical degree is from the University of Michigan.


KP: Do you still have your own medical practice in addition to teaching?


PF: Yes. I stayed at the University of Michigan and am now on the faculty of the medical school within the division of general internal medicine. I see patients there in both the hospital and outpatient settings in addition to my teaching responsibilities with the medical students and residents.


KP: You have released five CDs in about five years, which is prolific for even a full-time musician. How do you fit in time to practice the piano and compose?


PF: I never took up golf, so piano playing gets to be my time-consuming hobby! Actually, I find that once I get the first spark of an idea for a particular piece, I can complete it pretty quickly.


KP: Imagine that - a doctor who doesn’t play golf! Are playing and composing stress-relievers for you?


PF: Definitely. As you know, it’s wonderful just to lose oneself in the music.


KP: Absolutely! What inspires you to compose?


PF: Sometimes, I am inspired by an occasion (such as the birth of a child or a friend’s wedding) or a desire to honor special people in my life. Much of the time, though, a composition becomes its own inspiration. I might be noodling around on the piano and find something that I like and think to myself: Ah, that’s pretty good. I have to turn that into a piece! Believe it or not, when I am working on a new CD, I’ll sometimes put composing on my to-do lists for the weekend, as in “1. Pay the bills, 2. Mow the lawn, 3. Compose a ragtime piece in G Major, 4. Jog on the treadmill.” 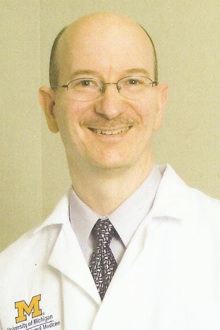 KP: That’s really interesting! Is it widely known where you teach and practice that you are also a composer/pianist?


KP: What inspired you to record a CD?


PF: I wanted to record certain pieces, those that were particularly important to me, as a legacy to my children.


KP: I love your ragtime pieces that you include on your CDs. Ragtime is a particular love of mine, as well, so I really appreciate your understanding of the style and how much fun goes into the music. Have you always enjoyed ragtime? Do you have any favorite composers in the genre?


PF: Thanks! That’s great to hear. David Simon, a friend of mine in high school, played a lot of Joplin and first got me interested in ragtime. Joplin is my obvious favorite, but I also like Bolling, Bolcolm, Confrey, Hampton, and many others. 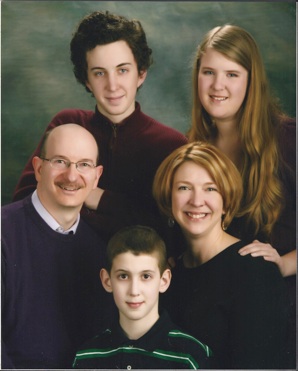 KP: I love William Bolcom’s rags! Especially “Old Adam” from The Garden of Eden Suite and “The Graceful Ghost.” His rags are a lot more difficult than Joplin’s, but they are still a lot of fun. Who are your other favorite composers?


KP: Do you have any plans to release sheet music of any of your pieces?


PF: I haven’t explored the possibility, though I like the idea very much.


KP: All five of your albums have the feeling of being family projects, at least in part. Tell us a bit about your wife and three kids.


PF: Karen and I have been married for 22 years and she’s terrific—quite a music lover herself. Derek is our oldest, now in college, and is a very good pianist. Ellie is going to be a senior in high school and plays cello and flute in addition to the piano. She’s the best sight reader in the family! Ben, my youngest, just turned 15 and is my fellow composer. 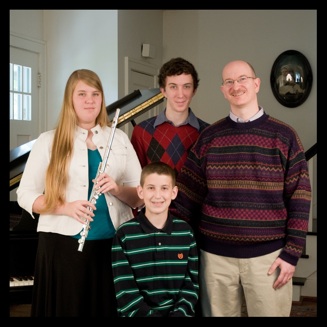 KP: Do any of your kids have aspirations toward careers in music?


PF: I don’t think so and that’s fine with me. I’ve learned that there is something to be said for allowing music to be purely a joy, without obligations.


KP: I definitely hear you on that one. It’s a tough way to make a living. All three kids have appeared on your albums, and some pieces that Ben has composed have also appeared. Are they the first of their classmates to be recorded?


PF: Yes. I hope they have acquired some “street cred” among their friends for being on iTunes and Amazon.com!


KP: I would think so! Quite a few of your song titles and liner notes are whimsical and really funny (“The Tuesday Zoo,” “Post-Lubrication Axle Mechanics,” “Mowtown Blues,” “The Ballad of the Unknown Pimble,” etc.). Are you a bit of a wordsmith/punster in addition to your other credentials?


PF: Thanks for noticing! I do love word play and enjoy writing poems and song lyrics in addition to music.


KP: I’ve read that you did a fair amount of performing in your college years. Do you still perform much? Do you perform your own music?


PF: I have given a concert at the University Hospital and used to play at the internal medicine department dinner each year. My children and I have played for a local retirement community and for church groups and nursing home residents. I do perform my own music, though when I play at nursing homes or retirement communities, I also play my arrangements of old standards that I think the listeners will enjoy.


KP: What a great experience for all involved! Are you currently working on album #6 or do you take some time off between albums?


PF: That’s an interesting question. Normally, I take a hiatus of 4-5 months after completing a CD, but I’ve been working on a song about the recent death of my father. I’m not sure if it will prompt me to work towards a sixth CD, but it’s important to me to record this song, at least.


PF: Other than my children? I greatly admire Kostia as well as a number of classical pianists, including Barenboim, Ashkenazy, Brendel, and Serkin.


KP: I did an interview with Kostia about the time his second album came out. Really an interesting guy and a very accomplished artist. I heard he went back to Russia a few years later because he couldn’t make it here. That’s so sad. What do you like to do in your free time (if you have any!)?


PF: I love watching college football and basketball, reading, and listening to humanities lectures on my ipod.


KP: It seems that I have reviewed several CDs lately that claimed to be “healing” music. Do you have any feelings about or experiences with the healing properties of music?


PF: I believe that music can do remarkable things. I’m not sure I have seen evidence of its healing properties in a strict, medical sense, though I’d like to. I certainly believe that listening to music can help patients greatly as they face illness and recover from it.


KP: Music therapy seems to be a rapidly-growing profession. How do you feel about that?


PF: As I just mentioned, I believe that listening to music can be a wonderfully helpful experience for patients (as for all of us). We have music therapists at our hospital and it’s fascinating to note that when they are playing in a patient’s room, all of the nurses and doctors tend to move toward that room to do their work. I would greatly enjoy playing for people in this capacity one day, when I retire.


KP: Who or what are some of your musical influences?


PF: All of the composers whose music I have enjoyed over the years. I don’t think I can be more specific than that! I do try for a lot of stylistic variety in my pieces and that may result in part from the fact that I like so many different types of music.


PF: I have too hard a time narrowing down the list! 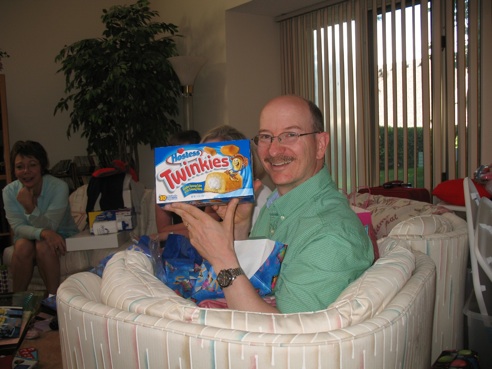 Many thanks to Paul Fine for taking the time to chat with us! For more information about Paul and his music, visit his Artist Page here on MainlyPiano.com.
Paul's Artist Page • More Interviews