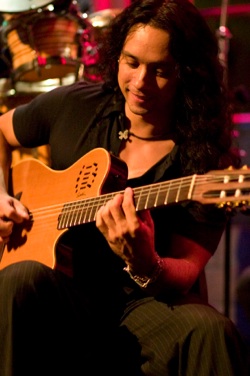 One of the things I’m enjoying most about doing my own website and not limiting it to strictly solo piano music is that I’m discovering some incredible music and artists that I might not have found otherwise. A recent favorite is guitarist Russ Hewitt. I first encountered Russ’ music when he sent me his debut CD, “Bajo el Sol (Under the Sun),” for review earlier this year. As a rock musician, Russ has been referred to as a “guitar god,” and with good reason! The man can play!!! He is calling his original music “Latin/World,” which gives him a very broad spectrum of musical influences to draw from. “Bajo el Sol” is sure to be one of my favorite CDs for the year, and I wanted to get to know Russ a little better. Here is our interview from May 2009:


KP: I have to admit that this might be the first interview I’ve ever done with a non-pianist or keyboard player, so please excuse my lack of guitar expertise! To get started, tell us a bit about yourself.


Hewitt: I appreciate your taking the time. I made a conscious decision early on that this is what I wanted to do regardless of fame or fortune. I figured I'd rather be a great player and starve than have a great-paying job and be miserable. There have been some tough years struggling to make it work, but I wouldn't have it any other way. I'm now able to play for a living and if fame and fortune come, it's a bonus.


KP: When did you start playing the guitar?


Hewitt: I got my first guitar when I was eleven because my older brother played and I followed whatever he did. I didn’t take it seriously until he quit and sold me all of his stuff when I was fourteen.


KP: Which styles did you study?


Hewitt: I started with rock and heavy metal and then found my way to classical, bluegrass, flamenco, country, etc. I learned how to read guitar tablature and watched as many videos as I could, regardless of the style.


KP: How long did you study guitar?


Hewitt: I feel I'm still studying the guitar (ha). Currently, I divide my time between writing and practicing. Right now I’m writing and only get to “play” at gigs. Once all the tracks are written for the next CD and it's time to work on the solos, I'll get back to my practice routine which consists of technique exercises and a pile of books and magazines to go through. I used to try to practice and compose at the same time and nothing seemed to get done.


KP: I understand you have had a career in rock music and have been referred to as a “guitar god.” Pretty heady stuff! Did you record rock music? Tour? Are you still playing rock music as well as your original compositions?


Hewitt: I was in four different local bands over the years doing original music and trying to get labels interested enough to sign us. I've recorded eight independently-released CDs plus various studio sessions. I did regional touring, but nothing on a national level. The only rock I’m doing right now is studio work for an artist named Roxy Batz.


KP: How did you pick the title “Bajo El Sol” for your album?


Hewitt: I wanted a title that would encompass my writing influences and travels from around the world. I thought “Under the Sun” fit well.


KP: How is the album doing?


Hewitt: The response has been incredible. The first single, “Bajo el Sol,” reached the Top 20, and the second single, “Lydia,” reached the Top 15 on the smooth jazz indie charts. The singles have been on the charts now for over nineteen weeks. More than sixty-five stations have played tracks off the CD as well as Music Choice satellite and cable TV. The press reviews continue to come in from all over the world and they, too, have been incredible. I really appreciate you and other media outlets that give an unknown artist the opportunity to been seen and heard.


KP: Was nuevo flamenco a style you played on your own rather than in public while you were playing rock professionally?


Hewitt: I've always played nuevo flamenco at restaurants and cafes, but because I didn't have a CD or product to push until recently, I didn't bother with a website or a MySpace page. I used the time to learn songs and the technique required for this style of music, as well as to do research on other more-established artists to try to figure out what I could do that is different. I knew that if I wanted to get any kind of national attention, I had to have a lot of things in place and make a good first impression.


KP: What made you decide to focus on more of a Latin/World music style? I’ve never heard any of your rock playing, but this original music of yours seems so natural. It really stopped me in my tracks! 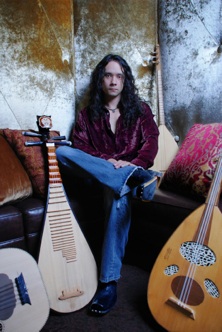 Hewitt: Thank you. I feel that I have an affinity for this style, and because I can't sing or write lyrics, I wanted to find my “voice” on the guitar. Latin/ World allows me to do anything I want from using exotic scales and time signatures to showcasing the guitar, all under one heading. I knew at some point I was going to make this CD (“Bajo el Sol”), and when my last rock band broke up, the time seemed right to move forward with this project.


KP: When did you take the backpacking trip through Europe and the Asia? How long were you out?


Hewitt: The first trip was in '96. I backpacked for six weeks, starting in London and ending up in Athens with all points in between. In '99, I spent fifteen days in Egypt traveling down the Nile River and then taking a plane to Abu Simbel and the Pyramids. In '02, I went to China for three weeks. I was based in Beijing for two of those weeks, then four days traveling down the Yangtze River. That was before the dam was completed and was flooded. I spent the last couple of days in Hong Kong. In '05, I went to Turkey for fourteen days. I try to take a big trip every three years or so, and I'm way overdue (ha).


KP: Did you just strap your guitar to your back and go?


Hewitt: I used to take my guitar, but with the last couple of trips, I needed a physical and mental break from my normal routine.


KP: On your website, you said you had the opportunity to jam with musicians while traveling. Did you just sit in on sessions or how did you find other musicians to play with?


Hewitt: Every place I went, I would go to a music store that sold instruments indigenous to that region. There's always at least one player just hanging out and willing to jam. I would also seek out cafes and restaurants with live music, like the places I used to play in Dallas, and when I found good players, I would talk to them between sets or after the show and set something up.


KP: How did that experience affect your music?


Hewitt: It affected everything: how I play, how I approach writing music, how I use various instruments, and how I want my music to sound overall. Now, with the internet and YouTube, it's a little easier to discover music from around the world, but back then, to hear and see it for the first time was amazing. The possibilities seemed endless for doing something that was familiar and different at the same time.


Hewitt: I'm going to do a Christmas CD next. I realize that there are hundreds of Christmas CDs and a dozen or so that are in the nuevo flamenco style, so my producer (Bob Parr) and I are going to try to push the boundaries as much as we can and present something new to something that's very old. I'll have a new original CD out the first part of next year. I'm going to continue to explore musical stylings from around the world and make them my own. I have already written a Tango, Milonga, a song in 11/16 time signature, and a song using the Hindu scale. I'll definitely be bringing in a lot more exotic instruments and guest players as well.


KP: Are you doing much touring?


Hewitt: I would like to get to that point. Right now, I'm playing shows and festivals for some of the radio stations that are playing my music along with a bunch of local gigs. We're setting things up for next summer as well as some Europe and Indonesia dates. 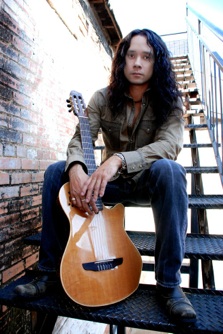 KP: Do you currently play mostly in the Dallas area?


Hewitt: I have a steady gig every Thursday, Friday, and Saturday, plus four booking agents that deal with private parties and events in the Dallas/Ft. Worth area.


KP: How many guitars do you own?


Hewitt: Probably too many! ha. In total, I have about twenty guitars and basses plus exotic instruments. For the most part, they all have a purpose for live playing or studio work, but it wouldn't hurt to get rid of a few.


KP: Do you usually perform with a band or solo?


Hewitt: 90% of the time it's a four-piece band with two guitars, bass and drums. When I do bigger shows or festivals I'll add a percussionist and a violinist. Sometimes with private parties they only want a duo or trio, which is fine. The beauty of this style of music is that it works with any combination of players and instruments.


KP: Who do you consider to be your biggest musical influences?


Hewitt: It's hard to say. I feel that as musicians we are an accumulation of everything we learn, even if it's subconscious. For example: when I saw a country guitar player do “banjo rolls,” I had to learn them. I would then woodshed until I learned to do it and then move on to the next thing. After twenty years, there's a lot of stuff floating around in my head. ha. The trick seems to be what to do with all that information.


Hewitt: I'm up for anything. I'm going to continue to try to create as many opportunities to been seen and heard as I can. There seems to be a resurgence of independent artists that are making it happen with little or no label help - it just takes a little more work.
Very best wishes to Russ Hewitt! Thanks for spending some time chatting! Be sure to check out his website and his Artist Page for more information.
Russ' Artist Page • More Interviews