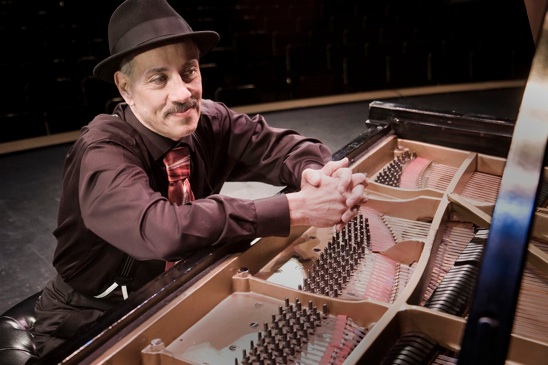 Pianist/composer/ethnomusicologist Scott Cossu was one of the original artists on the Windham Hill label, and is one of the most-respected pianists in contemporary music. A musician who can literally do it all, Scott’s story is fascinating. Scott will be making his second appearance in my house concert series on May 5, 2012, so this was a great time to do an interview. Enjoy!! 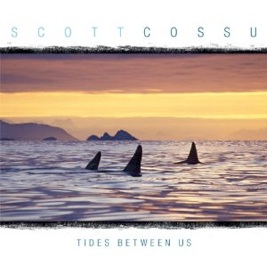 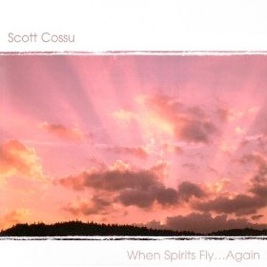 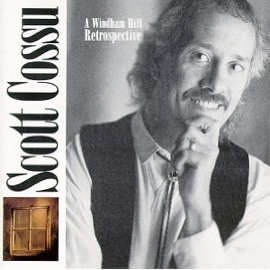 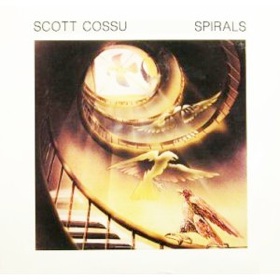 KP: Hey Scott! How are things in southern Washington?


SC: The answer is: wet, wet, and quite wet, but I am staying healthy and working on a new recording project.


KP: Gee, that’s my exact description of the Oregon Coast - except the part about a new recording project! I so enjoyed meeting you last year when you performed here with Jessica Blinn, and am excited about your return May 5th of this year! What do you have in store for us?


SC: I am now working with a very good musician who plays flutes, harmonica and sax. His name is John Croarkin and he's only recently moved to Olympia from Wisconsin.


KP: Exciting! I was reading some of the articles on your website and was surprised to see you referred to as a “grandfather of New Age music.” How do you feel about that?


SC: Innocent. When that “new age” label was first coined, a lot of the Windham Hill artists fell into that category because there wasn't a better one. World Music wasn't there yet. I'm still not sure what it really means, but I know it covers a lot of different styles. I accept the fact that it can be a very innocent and accepted musical term.


KP: “New age” seems to encompass just about anything that doesn’t fit into another category. Most people seem to consider you more of a jazz pianist. Actually, you are a musician who can seriously “do it all.” Are there any musical genres that you don’t play? Can you rap at the piano?


SC: I don't play or even attempt hip-hop or rap or any type of older country music, or disco. I actually like the blend of classical, R & B, and contemporary jazz.


KP: You are truly one of a kind! Let’s talk a bit about your music background. Where were you born and raised?


SC: I was raised in SW Ohio. I played in some rock & roll bands as a teenager, and then I graduated from Ohio U. with a degree in music. I had always been interested in learning lots of musical styles, which is why I ended up at U. of Washington in grad school, studying Ethnomusicology.


SC: No, I am the only one. I have siblings who are: a lawyer, a nurse, and a doctor. My father was in the medical field, so I guess I am a bit of the radical one!


SC: I started when I was around 12. My early focus was on classical music.


SC: I took lessons all the way through high school and college. Mostly classical, with a little jazz thrown in. 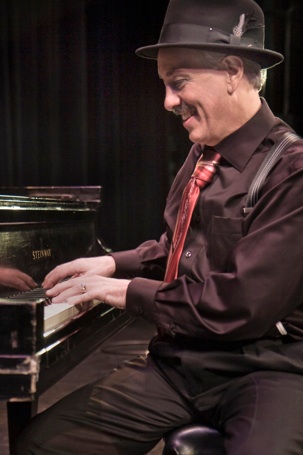 KP: Did you play in rock bands?


SC: My proud goal in H.S. was learning the long version of the piano solo for "Light My Fire." I played in several rock bands, but there were also a few R & B and soul bands in there, too.


KP: When did you become interested in Ethnomusicology and what triggered that interest?


SC: During my senior year at Ohio U., I took a class called "Music of Africa" from a man named Hamza El Din. He is the reason I'm doing what I do now. He was from northern Sudan and was able to compose and make sense of the older traditional music styles, and combine them with his own modern influences. He worked with the Kronos String Quartet as well as the Grateful Dead! He recommended University of Washington to me and made it possible to get admitted without a hitch. He liked what he saw in me. Hamza was an incredible teacher.


KP: The Kronos String Quartet and the Grateful Dead? Wow!!! That’s versatile! How have your world music studies affect your own music?


SC: It gives me a nice clarity of balance in my composing. I see the older traditions as a grounding point for making sense of all the overlapping styles that I've been exposed to. 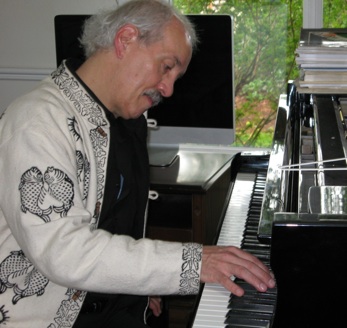 Scottt at Kathy's piano, 5/11
SC: My first compositions were during my late H.S. years.


KP: Do you play any instruments other than piano and keyboard?


SC: I am also a flutist. I play Western concert flute as well as several flutes from China, Vietnam, Thailand, Ecuador and Romania.


KP: You were one of the original artists on the legendary Windham Hill label. How did you meet Will Ackerman and Alex DeGrassi?


SC: I played a concert in Meany Hall at the U. of WA in the late 70's. I was asked to perform in the middle of the show so there would be guitar/ piano/ guitar. Alex and I started touring together not long after that. I then started working with George Winston in the early 80's and he produced my first Windham Hill album called Wind Dance. 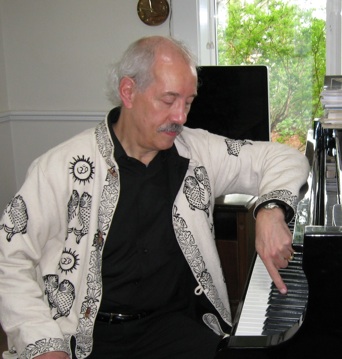 KP: I read that you did quite a bit of touring with George. Did you wear shoes? (laughing!!!)


SC: I always wore shoes, but when I played at some summer festivals, I would often have the basics of sandals! George and I were a good team during the early years. We toured in a VW bug. Half of the back seat was filled with my records and the other half of the seat held his recordings.


KP: In 1989, you had a huge world tour planned when you were hit by a car in Los Angeles. Let’s talk about that a bit since your story is such an inspiration.


SC: I remember that it had been an incredible year. My recording, Switchback, had a good run and ended up high on the charts during 1989. Three days before a 40-city world tour, I was hit as a pedestrian in L.A. The next few months where spent in the hospital and the next couple years were dedicated to recovery. My recovery has been pretty much miraculous. I have amazed all the doctors. I feel great, and life has never been better. 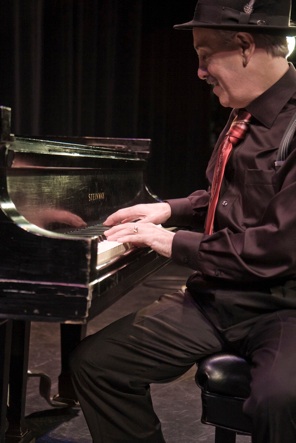 KP: I’m so glad the story has had a happy ending! How long did it take before you were able to play the piano again?


SC: I was told that the speech therapist in the L.A. rehab facility brought in a piano and I started playing when I was still learning how to walk again. Of course, I don't remember this at all. There are videos of me trying to play, but I am just confused. My guitar player stuck with me and eventually, muscle memory took over and I started from there.


KP: Did you have to relearn all of your own music?


SC: I've relearned a lot of my music, but there's a lot that still hasn't come back. The good news is: I can still compose new music!


KP: You are truly amazing and an inspiration! How many albums have you released?


SC: I have released 13 of my own CD's and one with my guitarist Van Manakas. I am on dozens of Windham Hill Samplers and other New Age samplers.


KP: Are you still working on re-recording some of your Windham Hill material that went out of print?


SC: My new upcoming project is called Lullabies and is a CD that features several new versions of older W.H. pieces as well as a few new compositions. It's mostly piano, guitar and flutes and possibly some cello.


KP: I can’t wait! Who and what do you consider to be your musical influences?


KP: I’ve read that you also compose music for television commercials, documentary films, and nature videos. What are some of the projects you’ve enjoyed the most?


SC: I really enjoyed a film that I composed the music for, about the wrapping of islands in pink fabric, by the famous artist "Christo." I also worked with Art Wolfe as the musical portion of his project Edge of the Earth, Corner of the Sky. I also composed music for a very stimulating project about the extreme driving conditions of a VW Jetta, in extreme cold and extreme heat. I have had a lot of my compositions used in PBS shows such as Nova and Nature.


KP: How many piano students do you have? Do you teach beginners?


SC: I have about ten students. I never advertise and I like to teach all kinds of unusual characters. I call my style "How to become a formally trained street musician." I have a few 12 - 16 year olds and a few adults. It's a nice way of sharing musical ideas that have worked for me.


KP: I love your title! What do you like to do when you’re not making music?


SC: I enjoy bicycling, kayaking, watching classic music DVD's and movies. I like browsing thru all kinds of reading materials that make me look at things in a new way. I value my time with my family. My wife, Debi and I like to go see music or go to plays.


SC: #1 would be to have world peace.
#2 - Cures for so many diseases in the world and that the wealth would be shared more evenly to provide everyone with what they need.
#3 that every city had a beautiful performance center with a Yamaha grand in it.


SC: The concert this May will be a nice blend of my musical styles. It will be a showcase for some newer compositions, as well as some older W.H. pieces and a few tunes from the new jazz and blues recording. Thank you Kathy! 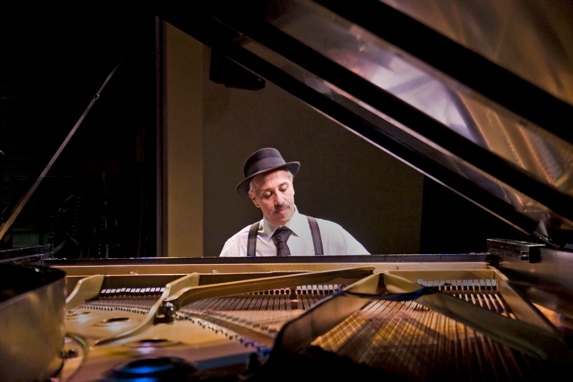 To learn more about Scott Cossu, be sure to visit his website and his Artist Page here on MainlyPiano.com.
Scott's Artist Page • More Interviews