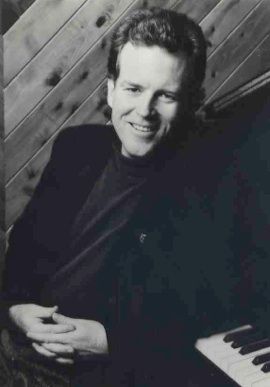 I did my first interview with Spencer Brewer in 1993. I mailed him a list of questions, and he sent me back a tape with his responses. The tape was well over an hour long, so I was able to learn a lot about Spencer very quickly. I listened to that tape for the first time driving in my car, and some of what he said was so funny that I almost had to pull over to the side of the road! This is some of what I wrote in the opening paragraph of that first article:

"At first, it was a little difficult to match this free-spirit with the tender pieces that have touched all of our hearts ("Dreamgift", "Where We Used to Play", "My Sweet Elijah", etc.), but once we got into some depth it was obvious that I was working with an extremely intelligent, sensitive, and complex man." That opinion as only deepened over the years. I have the utmost respect for Spencer and his work, and count him among my favorite people.

In an age of specialization, it is amazing to find a Renaissance-man among us who is willing to try just about anything. A prolific and multi-faceted composer who is constantly giving back to his community and the world at large with arts programs as well as environmental projects, Spencer is also involved with many educational and humanitarian endeavors. As a performer, few have his ease onstage both playing the piano and storytelling. His early classification as a "new age" composer indicates only one of Spencer's many composing styles. Harsh developments in the music industry and a head-on car crash in '99 have altered some of Spencer's previous long-term musical goals, but he likes the changes within himself and his music, and is ever ready to move forward. Here is a sketch of his life so far:

Spencer Brewer was born on June 21, 1954, in Dallas, Texas, the first of three boys. Spencer's mother is a leading dyslexia therapist, and his father is an attorney and corporate risk-manager. The only other musician in Spencer's family was his grandmother, Alma Loveless Gertrude Brewer, affectionately known as "Doody." She introduced the young Spencer to boogie-woogie and blues piano, and away he went! Spencer started piano lessons when he was eight, after his mother and grandparents scraped up enough money to buy an old upright. By the time he was twelve, Spencer was sick of piano lessons. He didn't have good teachers, and was much more interested in improvising and writing his own songs than in learning classical music. He made a deal with his parents that if he continued to spend at least an hour a day at the piano - playing whatever he wanted to play - he could quit taking lessons Spencer wrote his first song when he was nine, and started improvising when he was ten. At twelve, he was actively composing, and he started playing professionally in rock bands at sixteen. He attended Stephen F. Austin State University in Nacogdoches, Texas for about a year and a half. His original major was forestry, but he quickly changed to music. He took some music theory classes, and then dropped out and moved to Austin, Texas, where he started working as a full-time musician. For three years, his routine consisted of playing the piano in restaurants at lunchtime, in fern bars in the afternoons, and various other gigs at night. From the ages of 19-22, he played the piano an average of 10-13 hours a day. Spencer's parents never supported his becoming a professional musician, and his father thought he should stay in college and get a "straight job" like everyone else in the family had done for generations.

From his 20's on, it is amazing that one person could do so many different things and still stay so focused on his music. A few of those endeavors included an import/export business, being a carpenter, floor layer, housepainter, caterer, chef, and restaurant-owner. He has had a piano tuning and restoration business for about twenty-five years, and owns The Mendocino Piano Company, where he rebuilds and services pianos. Spencer says that he has played the piano in every kind of establishment imaginable; some of the more colorful ones include in an airplane, on a cruise ship, at Miss America and Miss Alaska pageants, in vineyards, at a nudist camp, and in a redwood forest. For awhile, he was a chef and piano player on the Mississippi Queen riverboat. Six years ago, he built a state-of-the-art recording studio on his property, and founded Laughing Coyote Productions.

Spencer founded Perfect Pitch Music in 1978 while he was in Missouri. He also started Willow Rose Records in 1981, and had several albums on that label when he sold it to Narada in 1984. Spencer moved to California in 1981, and had a piano shop in Pleasant Hill from 1981-1984. In his work as a piano technician, Spencer has worked on more than eight thousand different pianos (including mine!); he has even worked on the pianos in the White House! Spencer has also owned at least six hundred pianos. A few years ago, Spencer bought the oldest piano restoration shop in the state, and expanded his own facility by about double.

Spencer, his wife, Esther Seigel, and son, Dorian moved to their ranch in Redwood Valley, CA in 1984. Esther is a marriage and family counsellor, and also teaches horseback riding to high-risk and handicapped people. They have several horses, and also open their home to troubled young people as an emergency foster care home. Dorian is now an adult.

As diverse as his life has been, it is no wonder that Spencer's musical inspirations have also been varied. Some of his musical influences include the early electronic musicians as well as The Beatles, Jimi Hendrix, and Cream, along with the early jazz pianists such as Memphis Slim, Meade Lux Lewis, Oscar Peterson, and Art Tatum. He also really enjoys the music of the French Impressionists such as Debussy, Ravel, Saint-Saens, and Satie.

To date, Spencer has played on close to fifty recordings - fourteen solo and duet albums as well as many compilations from Narada and other labels. His music has been featured on the Oprah Winfrey Show, Barbara Walters' specials, the 1988 and 1992 Olympics, on nearly every airline, and in dozens of TV programs internationally. He wrote the theme songs for the National YMCA, The Japanese Postal Service, and The National Big Brothers/Big Sisters; and composed the soundtrack for the award-winning film on racism, "The Color of Fear". He has also written two musicals: "Cinderella Once Upon a Time" that was staged several years ago in Missouri, and "Willamancefoot and the Mugakillawomps" which became an animated film. He was the Musical Ambassador for The Big Brothers and Big Sisters of America for five years, and did benefit concerts all over the country for that organization. He has done in concerts all over the US (he will be doing his fourth "Live in Hercules" concert 2/10/01), as well as in Canada and Mexico.

Once a motivating force in his life, Spencer no longer feels the need to perform or release albums. The music industry has become incredibly difficult to deal with for independent artists, and Spencer says he just doesn't want to have to work that hard at it. He enjoys playing with musician friends and performing locally, and gets satisfaction from working behind the scenes for other artists in the production studio on his property. Some of the major names in music have recorded there, and the sound quality is amazing!

A couple of the projects that Spencer is currently working on include a follow-up film to "The Color of Fear" called "Last Chance for Eden". "The Color of Fear" is being used in schools, corporations, small businesses, and various other organizations as a tool for diversity training. Oprah Winfrey aired it on her television show, and said it was the only film that dealt with the core of racism and how to cure it. Both of these films have been made by Lee Mun Wah, and Spencer finds collaborating with him to be very rewarding. Spencer also heads up the free concert series, "Sundays in the Park" in Ukiah, which has been voted the "best free entertainment" in Mendocino county for many years, and he is also very active in many local educational foundations.

When it comes to composing, Spencer knows no restrictions or boundaries for his inspiration. Sometimes he dreams the music, and if he can wake up and get to the piano fast enough, he can sit down and play the whole song. The first piece that Spencer dreamed was "Dreamgift."

I asked if there was a philosophy behind Spencer's composing, and he said, "Yes. Be the most creative person you can in life." He continues: "I really believe, with all my heart that everybody is born with a talent or ability, and if each of us was to search out this gift, I think there would be true harmony on the planet." A head-on car accident in November 1999 left Spencer unable to play the piano for about six months, and he lost his desire to compose for almost a year. The desire is returning, as are his playing "chops," and Spencer is really happy with the direction his music is taking. He feels it is deeper and more reflective of the profound changes that have been taking place in his life.

When asked if he has any words of advice to young people studying music now, Spencer says, "Continue to explore your own music while practicing the technique. A well-rounded student is one that can and will always improvise, read, compose, and have theory down so that music us a 'known language' instead of just something one reads or interprets."
Spencer's Artist Page • More Interviews