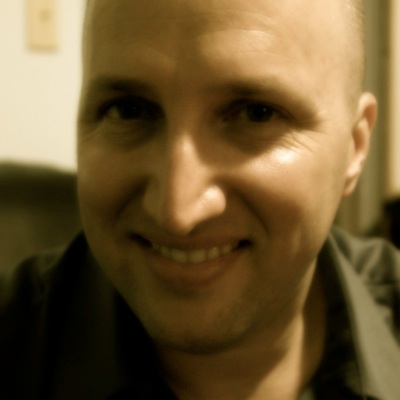 I first heard Steven Cravis’ music about ten years ago when he sent me his first two solo piano albums, True Reflections (1992) and The Sound of Light (1995) for review. We met at a couple of Whisperings concerts and had a chance to talk, and I really enjoyed getting to know Steven. Last year, he sent me his first solo piano album in fifteen years, Healing Piano, which blew me away. It is on my list of 25 Favorites for the year, but if I had to narrow it down to ten, it would still be on the list. An active Whisperings Artist, Steven has also found many very diversified ways to market and use his music. I think you’ll enjoy getting to know him, too!


KP: Hey, Steven! How are things in the SF Bay Area?


SC: Everything is fine. The weather is nice relative to the rest of the country! 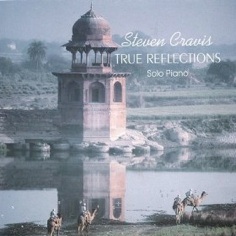 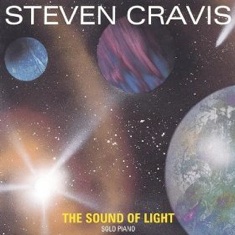 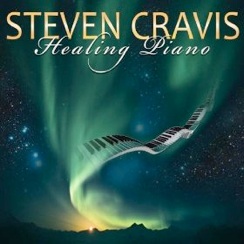 
SC: Thank you. It's doing well. The hour-long single mp3 version has been in the Top Paid 100 of the New Age category at Amazon MP3 for over 300 days now. That's the hour-long single track at MusicForBetterSleep.com. The separated nine tracks version (same recording, just separated tracks instead of sold as all one file) is receiving good customer reviews at iTunes. Thanks for your wonderful review!


KP: I love that album and meant every word! What was your inspiration for doing this album?


SC: For several years it's been a project that circled in my mind but didn't manifest until recently when I had the opportunity to record at Joe Bongiorno's recording studio. What inspired me is that since the age of 18, I've been a meditator, and I wanted to put into music something that represents what I feel like when I meditate. My intention is to translate that feeling to the listener - even a listener who has never experienced meditation before. Also, in a world which has seen so much change, violence and overall craziness in a short period of time, I wanted to create something that is soothing, even to myself, for
falling asleep at night, and influences sleeping deeply.


KP: I keep hearing that Joe Bongiorno’s Piano Haven is a fantastic place to record since it’s so relaxed and Joe’s piano is so nice. How did that atmosphere affect your own creative process?


SC: What you've heard is correct, plus I would add that Joe is such a good guy, and patient, and he understands what it's like to record from the pianist's perspective. Also Joe's personality and guidance played a major role in my success with this album.


KP: I really like Joe, too! You did two great solo piano CDs in the ‘90s, The Sound of Light and True Reflections, and then no solo piano albums until Healing Piano. Why was there such a long time between piano albums?


SC: Thank you. After the first two solo piano albums, I began a lengthy journey of composing in multi-track synthesizer formats, learning and exploring web technology and online music promotion, and growing a music licensing business - not only solo piano - for TV, films and games. This along with wanting to balance quality time with family made me patient and confident that I would come back to doing more piano albums when the time was right.


KP: Have you released any non-solo piano CDs?


SC: Yes, Lavender Dreams (11 tracks), and the downloadable singles: 'Meditation Music', 'Relaxation Music' all which can be previewed at my site. 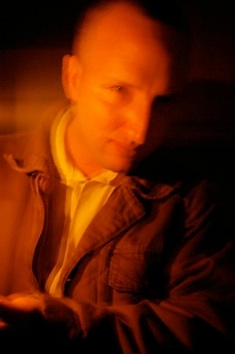 KP: I know that you are a full-time musician working in a lot of different musical applications (film, TV, video games, etc.). Let’s talk about those areas and what you’ve been doing within them.


SC: I've been working with a three-time Emmy award-winning filmmaker, David L. Brown, on music for his documentary about TBI (Traumatic Brain Injury) survivors. (See dlbfilms.com for more information.) Much of my music was featured on Orisinal, the family-friendly video game website, and most recently, Fallen Tree Games featured three pieces that I composed exclusively for their new Zen-style puzzle game 'Quell.' Right now I'm working on three more pieces for Fallen Tree Games. Also, I've recently launched my music licensing site where individuals and production companies can license my music by registering right on the site, and licensing directly from me, without any middle company, all directly through my website.


SC: I compose primarily 'soothing' ringtones. They're currently mainly available for the iPhone. There are two different kinds available;

1.Soothing Ringtones albums on iTunes, which can be previewed on a computer, purchased as full albums (16 tracks on each album - Soothing Ringtones and Soothing Ringtones II) and then converted into ringtones by the user using one of the free ringtone apps that are available on the iTunes Apps Store. These can also be purchased for Android based phones that can access my page at Amazonmp3.com.

2.The other kind that more recently became available can be found directly on the iPhone (ONLY previewable on an iPhone) by opening Safari on the iPhone and visiting iprts.com. Each one of these can be downloaded direct to the iPhone for $1.29 each ringtone, and does not need to be converted or synced from a computer. 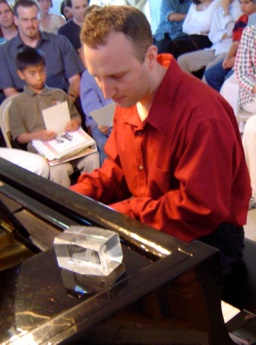 Steven at the 2004 Hercules, CA Whisperings Concert
KP: Interesting! Who knew there would be such a diversity of applications for original music! Let’s talk a bit about your early life. Where did you grow up?


SC: When I was seven years old I asked my parents for piano lessons.


SC: Twelve years with a wide variety of teachers, from classical to mostly jazz teachers.


KP: Where did you go to college?


KP: How long have you lived in San Francisco?


KP: You were one of the firstWhisperings Artists. How long have you known David Nevue? How did you find each other? 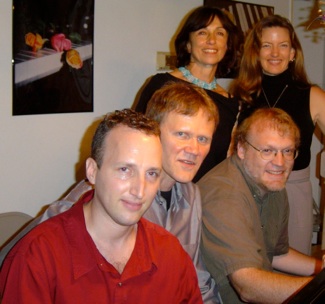 Whisperings in Hercules, CA July 17, 2004. From the left: Steven, Michael Dulin, Suzanne Ciani, David Nevue, Janie Horton.
KP: I guess that means that you met for the first time at the second Whisperings Concert, which was at my house in Hercules in 2004. Obviously you and I met for the first time then, too. That was really fun, and I got to meet some of your family as well!


KP: We met again a few years later at another Whisperings Concert at Piedmont Piano in San Francisco. Do you perform often?


SC: I don't perform often. I mainly compose and record.


KP: How old are your children? Are they interested in music?


KP: Is your wife a pianist?


SC: No, but she has a beautiful singing voice.


SC: The piano styles of Lyle Mays (from his Pat Metheny band days/recordings), George Winston and Liz Story, the music styles of Sting and The Police, the harp music of Andreas Vollenweider - I was very influenced specifically by his album White Winds. I’ve also loved music by the band Rush since I was a teenager. 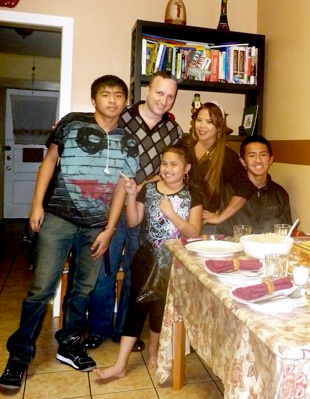 The Cravis Family
KP: Who are your favorite performers?


KP: That’s an eclectic group! What has been your most exciting musical moment so far?


SC: Well, I'm kind of geeky and the rapid development of music technologies and having my music be part of those technologies has been the most exciting to me, so this is a three-part answer:

1. The first time someone taught me how to burn a CD of my own recording that I had just made in a home studio.

2. The first time I uploaded one of my songs online and I realized that people from all over the world could now hear my music. The next was when I first learned (around late 2003) that I could submit original music as an independent artist to the iTunes Music Store which, even at the beginning, I regarded as opening up a whole new world of support for my music, which indeed it has been.

3. Very recently I launched availability of my sheet music for the first time directly on my own site. It really felt like opening up a store for the first time, being able to sell directly like this with no middle company processing the transactions! 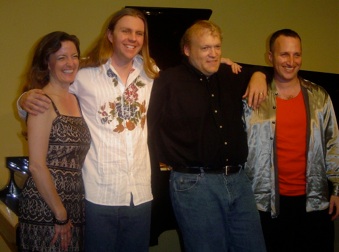 Whisperings in San Francisco 8/13/05. From left: Janie Horton, Scott D. Davis, David Nevue, and Steven Cravis.
KP: Is there a particular philosophy that you try to convey in your music?


SC: Usually it's one that values and embraces unity and healing. If I listen back to my music and feel more at one with myself and the world, which is part of healing, then I feel satisfied.


KP: Do you play any musical instruments besides piano and keyboards?


SC: No, but when multi-track recording with sample and synth
libraries, often I am playing the parts of other instruments, through a keyboard.


SC: I'm going to finally have the rest of the sheet music for the first two solo piano albums completed by the end of 2011 and available at my new secure sheet music online store. 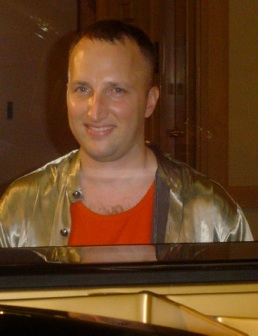 Steven at the fabulous Fazioli at Piedmont Piano in SF, CA in 2005.
KP: Is there anything else you’d like to talk about?


SC: I've been incredibly fortunate and thankful to be included amongst other great pianist-composers on the new Whisperings Solo Piano Volume 1 CD compilation. My piece 'Why?' is track seven. I recorded this at Piano Haven Recording Studio, too. All the information is available at Solo Piano Radio.com. I highly recommend the entire CD, thanks to the great company I'm in there. We all recorded at Joe Bongiorno's studio to get a nice consistent sound across the whole album.

I'm also very thankful to Robert Wierzbicki of Wierzbicki.org for co-founding NewAgePiano.net with me several years ago, and thankful to the many great pianists and video artists who continue to make that site a great resource for discovering great piano artists from all over the world.

Many thanks to Steven Cravis for this fascinating chat! To learn more about Steven and his music, please visit his Artist Page on MainlyPiano.com and his website.
Steven's Artist Page • More Interviews