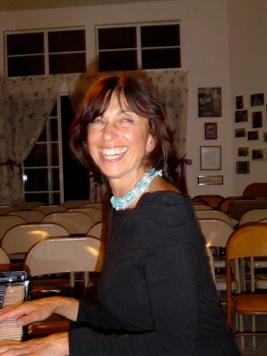 One of the pioneers in electronic music, Suzanne Ciani has come full circle back to her pianistic and acoustic roots. Since she was able to play the music of Rachmaninoff as a child, Suzanne obviously has the capability of being a very flashy keyboard virtuoso. She has instead chosen to compose from her heart rather than her ego, and while much of her music isn’t simple to play, it doesn’t require super-human skills. What Suzanne’s music does require is the ability to give the music the emotional quality that really brings it to life. When I first started teaching Suzanne’s music, it came as a shock to hear how drastically the pieces changed when they were played without any emotion. This has given me many wonderful opportunities to talk to students about putting more expression into their playing, and I’ve seen a tremendous amount of improvement in this area because students love and can identify with the music. There is definitely a feminine quality to Suzanne’s music, but this doesn’t imply any lack of strength. Her life and music have been a real inspiration for me, and as you get to know her better, I think you’ll see why.

Suzanne Ciani was born in an Army hospital in Indiana. The third of six children, she grew up in Quincy, Massachusetts with her four sisters and brother. Her father was an orthopedic surgeon who practiced in Quincy and Boston, and her mother was a homemaker who loved to sew, make quilts, and braid rugs. Suzanne’s brother was a drummer, but died about fifteen years ago. Her sisters have chosen some of the non-musical arts - one is a professional artist in Texas (and has done some of the artwork on Suzanne’s album covers), one is an architect, one is an attorney who lives in Marin County, and one is a student of computer technology.

In 1992, Suzanne was diagnosed with breast cancer - a tragic event that became a major turning point in her life. After surgery and radiation treatments, the cancer went into remission, but Suzanne knew she needed a change. She had planned to rent a house in Bolinas, CA for a year and then move to Italy in 1993, but she met her husband, entertainment attorney Joe Anderson, who was also renting the house off and on, and Bolinas has been her homebase ever since. Suzanne and Joe were married in 1994 on the Isle of Capri in Italy, the day after Suzanne finished recording her "Dream Suite" album. A crowd danced the couple through the walled streets of the city accompanied by twenty musicians in 18th century costumes. Suzanne rode a donkey through town who was also in costume! She calls the day “a dream come true, and an absolute fairy tale.” (Suzanne and Joe were divorced in 2000.)

Living so close to nature the past several years has been a different kind of inspiration for Suzanne and her music. She used to travel to different parts of the world to do her composing, but now feels quite content to stay at home and soak up all the wonders that living at the top of a cliff overlooking the ocean has to offer.

Suzanne’s fascination with music started when she was seven when her mother brought home a box of classical music albums from a nearby fire sale. Suzanne started piano lessons in the third grade, and this is also when she started to compose music. One of her sisters was taking piano lessons, and Suzanne wanted to play so much that she taught herself to read music. She played day and night, and, after one year of lessons, she was already playing Rachmaninoff. Her teacher said that there was nothing else he could teach her, so she continued to study on her own until high school, playing mostly classical music. As a child, Suzanne also tried playing guitar, recorder, Indian flute, and cello, but says she was hopeless at most of these. She also dreamed of becoming a ballerina, but had to give that up because of “flat feet.” At the age of seven, she knew her life would be about music, although she wasn’t confident about being able to make a living at it. She actually came close to going to law school.

In her junior year of high school, Suzanne auditioned for a music program, and one of the judges asked if she could play a C-scale. She could play Rachmaninoff, but didn’t know the scales, so she made the decision to study music theory and structure. She was a music major at Wellesley College in Massachusetts, graduating with honors in 1968. She earned a Masters Degree in Music Composition from UC Berkeley in 1970. It was while she was in graduate school that Suzanne began making a living in music. First, she went on the road with a rock theater group, and then she started composing and recording electronic music for television advertisements. While she was in California, Suzanne studied with some of the early pioneers of electronic music, including Don Buchla, whose synthesizers carry his name. Suzanne was one of the first people to do a live synthesizer concert here in the Bay Area in the ‘70’s, and did many performances in the Art Museum and with various dance groups, as well as for local radio station KPFA. She recorded her first album, "Voices of Packaged Souls," which was a limited-edition release, in conjunction with sculptor Harold Paris, using the computers at Stanford University as well as the Buchla. Suzanne continued to use Buchla’s synthesizers on her next two albums ("Seven Waves" in 1982 and "The Velocity of Love" in 1986). Once she got into electronic music, Suzanne didn’t play the piano at all for about ten years. She used her earnings from composing advertising music to finance her first two albums. 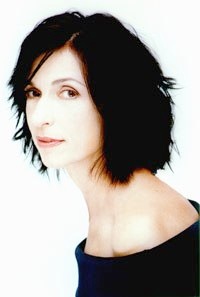 Suzanne moved to New York in 1974, where she pioneered sound design for television commercials. She wanted to be a recording engineer, but no one would hire her. She says, “It wasn’t good for a girl to be too smart.” She had saved her money to buy one of the first synthesizers, a Buchla, and was able to offer a “new sound” to advertising agencies, doing poetic sound interpretations of products and ideas. In 1977, she founded Ciani/Musica Inc., which has been one of the most highly-regarded commercial music production firms in the country. She was hired to design a special sound for Coca Cola, and developed the “pop and pour” sound that was used in Coke commercials for many years. This was Suzanne’s first international job, and it showed her that she could indeed earn an excellent living in music. Over the years, Suzanne has written and recorded music for at least a thousand commercials, and many of them earned her awards for advertising excellence. Some of these sounds are available on Suzanne’s website at www.suzanneciani.com. An interesting tidbit is that Suzanne was the first artist ever hired to write music for a pinball machine, and hers was also the first female voice to come out of a pinball machine!

Suzanne started recording her album, "Seven Waves," in 1979. It took two years to complete, and was first released in Japan in 1982. It was finally released in the US in 1984, and, due to its limited distribution, became an underground phenomenon. Private Music re-released "Seven Waves" in 1988 - most of the instruments used on that album no longer exist. Suzanne’s next album, "The Velocity of Love," was recorded and released on RCA Red Seal in 1986, and established Suzanne as a leading force in New Age music. The title song is Suzanne’s best-known piece, and she considers it to be her signature piece. In 1988, Suzanne recorded "Neverland," which was nominated for a Grammy Award. Up to this point, Suzanne’s recordings were primarily electronic. In 1989’s "History of My Heart," the piano started taking on a more important role, and in 1990, she recorded an album of piano solos, "Pianissimo." Her 1991 album, "Hotel Luna," was also nominated for a Grammy.

Suzanne has also composed the music for several films. She was the first and youngest woman to compose a complete score for a major Hollywood motion picture, "The Incredible Shrinking Woman," starring Lily Tomlin, in 1980. The music in this soundtrack uses a 100-piece orchestra as well as electronics. She has also scored the soundtracks for two documentary films about Mother Teresa, "Mother Teresa" in 1986 ('Mother’s Song” is the theme from that film) and “Mother Teresa: The Legacy” in 2000. She created the electronic score for "The Stepford Wives" (1975), and composed music for the TV soap opera, "One Life to Live" from 1991-93, and has appeared on various talk shows.

Suzanne and Joe set up their own production company in Mill Valley, CA in 1995. "Dream Suite" was the first release from Seventh Wave, and made her third Grammy nomination even sweeter - especially since Private Music would not allow Suzanne to do the album on that label. A 10th anniversary re-release of "Velocity of Love" came out in 1995, and Suzanne’s second album of piano solos, "Pianissimo II," was released in 1996, and became her fourth Grammy nomination. In early 1997, Suzanne assembled a “supergroup” of musicians called The Wave, to work with her on a live concert album. The concerts took place in San Francisco in March 1997 (I was there!), and it was a great experience to see and hear both her older electronic compositions as well as several pieces composed specifically for the group, brought to life in a mostly acoustic setting. 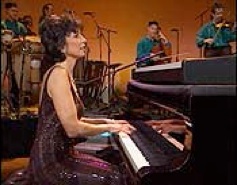 "Suzanne Ciani and The Wave Live!" came out later in 1997. Suzanne and Joe also assembled an eclectic group of musicians to put together a Christmas album that was released in 1997. It was released as "A Very Green Christmas" by Artists for Earth. This is one of my favorite Christmas albums, and includes a couple of songs recorded by Suzanne, as well as Spencer Brewer, Ira Stein, and others. Suzanne’s fifth Grammy nomination was for her 1999 release, "Turning," and quite a few of those pieces will be played in the workshop. Suzanne also released “Pianissimo III” in 2001, “Meditations for Dreams, Relaxation and Sleep” in 2002, “Pure Romance” in 2003, and “Silver Ship” in 2005, which won the Indie Award for Best New Age album. Actively performing concerts in Europe and Asia as well as the US, Suzanne is also interested in pursuing more film soundtrack work. She also really enjoyed writing her first recorded vocal piece, “Turning,” and would like to do more songwriting for voices other than her own.
Suzanne's Artist Page • More Interviews