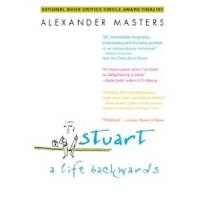 Alexander's Website Alexander's Artist Page on MainlyPiano
Product Links
Amazon (referral)
This site contains affiliate links to products. We may receive a commission for purchases made through these links.
Stuart: A Life Backwards
Alexander Masters
2007 / Delta Trade Paperback
310 pages
Review by Kathy Parsons
Stuart: A Life Backwards is a fascinating and heartbreaking biography of an English man who lived a life of crime and drug addiction, was often homeless, and suffered from physical problems. In the preface, we are told that Stuart Shorter stepped in front of a moving train at the age of 33, shortly before this biography was completed, so he never saw the final version. Alexander Masters worked closely with Stuart, and it was Stuart himself who suggested telling his story backwards. This makes for an unusual reading experience that really works. Alternating chapters return to the present time as Masters gets closer to Stuart and a very strong bond is formed between the two men as the book develops. More than most biographies do, this one also tells a lot about the author and his life. He lets us know his frustrations in dealing with Stuart, a man whose life and way of thinking is so different from his own. Additionally, in telling Stuart’s story, Masters has done an excellent job of showing how the government’s system of dealing with people in trouble, both kids and adults, has seriously failed those it has been trying to help get back into mainstream society. Just one example is how, as a young teenager, Stuart asked to be placed in an institution in order to escape an abusive older brother. The tragic irony is that the man who ran that institution abused the boys in his charge for many years before he was caught, so even as a youngster, Stuart was thrown from the frying pan into the fire. It is obvious that Masters grew to care deeply about his subject, and he always presents him as a whole person who had a valuable place in this life. Yes, there are common personality traits among the homeless and outcasts of our society, but Masters really brings it to the fore that each of these people is an individual who started out in life much like the rest of us did, as innocent children full of potential and promise. In telling Stuart’s story in reverse, we can see the events that changed his life and psyche, giving us a better understanding of what went wrong.

My only problem with this book is the British terminology in both dialogs and in descriptions. I have watched enough British films and read enough British writers to be familiar with much of the common usage and slang, but quite a few words and phrases had me baffled and made some of the passages difficult to understand.

I found Stuart: A Life Backwards deeply affecting and thought-provoking and recommend it highly.
January 27, 2009
Alexander's Website Alexander's Artist Page on MainlyPiano
Product Links
Amazon (referral)
This site contains affiliate links to products. We may receive a commission for purchases made through these links.