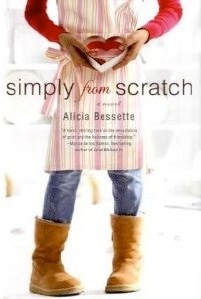 Alicia's Website Alicia's Artist Page on MainlyPiano
Product Links
Amazon (referral)
This site contains affiliate links to products. We may receive a commission for purchases made through these links.
Simply From Scratch
Alicia Bessette
2010 / Dutton
313 pages
Review by Kathy Parsons
Although this is Alicia Bessette’s first novel, I have also written reviews of her other work - for her two piano CDs, “Reservoir” (2002) and “Orchard” (2008). I have enjoyed her music tremendously, so I was very anxious to read her prose. Essentially, the book is about relationships, the power of love and friendship, the devastation of loss, and the slow process of healing and recovery from such a loss. It also illustrates how sometimes the greatest source of healing comes from something or someone very unlikely - in this case a 9-year-old neighbor girl who is being raised by her father.

Zell lost her husband in a freak accident about a year before the novel begins. She lives in the small New England town where she and her husband grew up and has pretty much isolated herself since his death. One afternoon she decides to bake and sets her kitchen on fire because her husband had left her a gift in the oven knowing she’d never find it there (he obviously did all of the cooking!)! As life is often funny even in the midst of tragedy, there is a lot of humor in the book. The story is told from three different points of view - in the first person by Zell, via emails sent from her husband while he was on an aid mission in New Orleans (where he died), and from a life-long friend’s viewpoint told in the third person. Gradually, we are told how Zell’s husband died, but by then we know him and like him very much from his emails and can empathize with the devastation that his family and friends felt in losing him. Zell is also completely lovable with all of her foibles and human-ness. We rejoice for her as she slowly evolves and heals.

I thoroughly enjoyed reading Simply From Scratch although I thought a few of the plot twists were a little too convenient. I also got mildly annoyed with Zell’s pirate talk to her dog and when she was alone, but that was minor. There are no action sequences, no violence, almost no profanity, and no sex - just a good story told simply and honestly. How refreshing!
October 6, 2010
Alicia's Website Alicia's Artist Page on MainlyPiano
Product Links
Amazon (referral)
This site contains affiliate links to products. We may receive a commission for purchases made through these links.