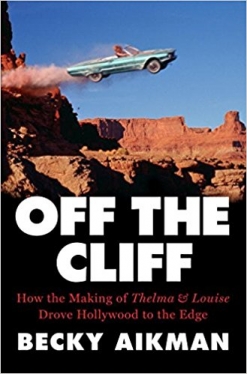 Becky's Website Becky's Artist Page on MainlyPiano
Product Links
Amazon (referral)
This site contains affiliate links to products. We may receive a commission for purchases made through these links.
Off the Cliff: How the Making of Thelma & Louise Drove Hollywood to the Edge
Becky Aikman
2017 / Penguin Press
Hardback - 320 pages
Review by Kathy Parsons
I have to say right off the bat that Off the Cliff: How the Making of Thelma & Louise Drove Hollywood to the Edge is the most interesting and entertaining book I have read in quite awhile. It reads like a well-paced novel, only it's non-fiction, which makes it even more intriguing. I saw Thelma and Louise when it came out in theaters back in 1991 (and on DVD since then) and it blew me away for so many reasons. At at time when most of the meatier movie roles for females were as hookers (with hearts of gold, of course!), it was so refreshing to see a film about a couple of women taking their lives into their own hands. They paid dearly for it - or did they? - but they were strong, funny, fleshed-out female characters at a time when that was very rare in movies. The story of how the film was made, from the inception of Callie Khouri's idea for a screenplay to finding a director to casting the stars and supporting actors (can you imagine Jody Foster and Michelle Pfeiffer as Thelma and Louise?) to filming in the desert to preview audiences' reactions and beyond, it's a fascinating account of what it took to get this amazing film made and into movie theaters. Along the way, author Becky Aikman includes all kinds of information and statistics about how much (actually how little!) things have changed for women in Hollywood over the years, and those tidbits just add to the drama of the book. Aikman also includes quotes from many of the actors (Susan Sarandon, Geena Davis, Brad Pitt and others), director Ridley Scott, writer Callie Khouri, and many others who worked on the film in a variety of capacities, talking about their experiences working on the film and how the movie affected their lives and careers. I thoroughly enjoyed this book and will look for more of Becky Aikman's writing. I also plan to watch the film again - hopefully with some scenes that were edited or deleted - now that I know quite a bit about what was going on behind the scenes! Very highly recommended!!

June 8, 2017
Becky's Website Becky's Artist Page on MainlyPiano
Product Links
Amazon (referral)
This site contains affiliate links to products. We may receive a commission for purchases made through these links.