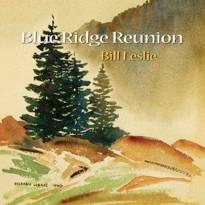 Bill's Website Bill's Artist Page on MainlyPiano
Product Links
CD Review
This site contains affiliate links to products. We may receive a commission for purchases made through these links.
Blue Ridge Reunion
Bill Leslie
2008 / 2D Designs, Inc.
Book, 124 pages.
Review by Kathy Parsons
After reviewing Bill Leslie’s wonderful Blue Ridge Reunion CD, reading the liner notes of the CD about Bill’s tribute to his late father, and viewing a few of his father’s paintings in the liner notes, I was anxious to see and read the companion book. I expected a paperback, but it is a beautiful coffee-table-style book that is hardbound and printed on semi-glossy stock. The songs on the CD are intensely personal with and without lyrics, but the book is even more so. The introduction tells about William Leslie’s sudden death when Bill was a teenager and how Bill never had a chance to say “goodbye” - something that has haunted him his whole life. In telling the story of his father and his father’s paintings, Bill also tells much of his own story and the story of the areas in North Carolina where his father loved to paint. More than sixty of William Leslie’s paintings and drawings are included - mostly watercolors - and Bill Leslie accompanies each painting with descriptions of the places and people depicted, some of his own poetry, thoughts about the paintings, recollections of growing up, and fond memories of his father. The book is so full of love and appreciation that each page glows and warms the heart. Bill Leslie’s fascinating tribute brings closure for himself, but he has also preserved his father’s legacy in print (and in song), and will reach a whole new audience for his father’s artwork. I have never been to North Carolina, but this book makes me itch to go see some of the scenes for myself. Bill has also included some of his own gorgeous photography at the end of the book.

Blue Ridge Reunion is available from billleslie.com as well as at regional museums and stores in North Carolina. Very highly recommended!
November 27, 2008
Bill's Website Bill's Artist Page on MainlyPiano
Product Links
CD Review
This site contains affiliate links to products. We may receive a commission for purchases made through these links.