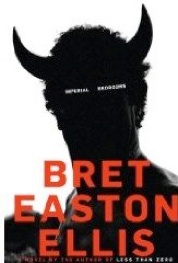 Bret's Website Bret's Artist Page on MainlyPiano
Product Links
Amazon (referral)
This site contains affiliate links to products. We may receive a commission for purchases made through these links.
Imperial Bedrooms
Bret Easton Ellis
2010 / Alfred A. Knopf
170 pages
Review by Kathy Parsons
I have read four of Bret Easton Ellis’ previous books, so I was very interested in reading his latest, Imperial Bedrooms, which is a sequel to his debut novel from twenty-five year ago, Less Than Zero. Reading the first book is not necessary to understand the second, as the theme of both books is a detachment from life in general and how that affects the various characters. Since the characters in Less Than Zero are very young adults, I felt there was still hope for them to overcome their jaded, disaffected attitudes toward each other and life in general, but twenty-five years later, these are people very set in their ways, and their indifference and narcissism have snowballed, leaving a group of people it is almost impossible to like, let alone care about.

Something that I find to be fascinating about Ellis‘ writing is that I always feel like I’m on the outside, seeing the events as merely an observer rather than someone with insights into the workings of the characters - especially, the narrators. By doing this, Ellis strongly conveys to the reader the sense of detachment his characters are experiencing. Zero and Bedrooms are both narrated by Clay, who is a screen-writer in the later novel and a rich, spoiled college student in the first. Usually when stories are told in the first person, you can more or less assume that the narration is factual from that character’s point of view. Clay seems to be more than a little unbalanced in Bedrooms, so it appears that he doesn’t know what the truth is - even about himself. Several of the characters are murdered, and although Clay seems disturbed about these events, is he really innocent of any involvement? He also believes that he loves “Rain,” a beautiful but talentless actress who hopes to star in one of Clay’s movies, but he often treats her cruelly and seems to want her the most after she has dumped him. Everyone is using everyone to further their own agendas, with little or no regard for anyone else, so the book is far from uplifting. Still, it is a very interesting ride into a world most of us know little about.
May 25, 2010
Bret's Website Bret's Artist Page on MainlyPiano
Product Links
Amazon (referral)
This site contains affiliate links to products. We may receive a commission for purchases made through these links.
More reviews of Bret Easton Ellis