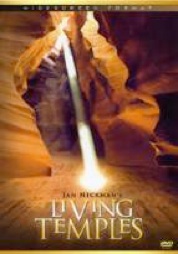 David's Website David's Artist Page on MainlyPiano
Product Links
Amazon (referral)
This site contains affiliate links to products. We may receive a commission for purchases made through these links.
Living Temples
David Lanz
2008 / Third Planet Pictures
DVD, 45 minutes
Jan Nickman (film) and David Lanz (music)
Review by Kathy Parsons
Living Temples is an incredible collaboration from filmmaker Jan Nickman and composer David Lanz. The first in a series of such projects, this film features breathtaking footage of the American Southwest that includes sacred grounds, oceans of sand, the cliff dwellings of Mesa Verde, time-lapse photography of the sky during the day and at night, and stunning natural land formations. Living Temples works seamlessly because of the way it was created. Rather than doing all of the filming and then setting it to music or composing all of the music and making the visuals fit, the artists exchanged rough cuts of their respective work as it progressed, developing the project together rather than independently of each other. The film concludes with an original dance choreographed and performed by Caroline Richardson, former First Soloist with the National Ballet of Canada, and includes optional (the vocal track can be turned on or off) spoken words by Academy Award winning actress Linda Hunt.

It is very interesting to note that David Lanz and Jan Nickman worked together at the Seattle-based record and video company, Miramar, in the 1980’s. Two of their landmark music videos were the enormously popular Natural States and Desert Vision (with Paul Speer), which launched their careers in film and music. Some twenty years later, Lanz and Nickman reunited as experienced masters of their arts, equipped with a whole new set of “toys.”

The music of Living Temples is some of David Lanz’s most beautiful work yet. His distinctive piano and keyboard stylings run throughout the soundtrack and provide the soul and heartbeat of the film. Flutist Gary Stroutsos plays a variety of Native American flutes and light percussion and composed additional music. His flutes are haunting and provide a reminder of which culture was first to explore and inhabit The Southwest. (The soundtrack is available separately and is magnificent with or without the visuals.) The spoken words by Linda Hunt are interesting, but perhaps a bit distracting. I turned them off the second time I watched the film, and found it much easier to be enveloped by the sounds and sights without the words. The dance segment was shot over several months in various locations. Caroline Richardson danced to the music played at twice its actual speed, and then the film was slowed back down to normal, giving a slightly altered, dreamy effect.

Plans are in the works for Living Temples to be shown on various PBS stations. In addition to the DVD and CD, which are both currently available at davidlanz.com, a piano songbook is forthcoming. (I’ll review that when it becomes available.) Living Temples is truly awesome, and I give it my highest recommendation.
February 28, 2008
David's Website David's Artist Page on MainlyPiano
Product Links
Amazon (referral)
This site contains affiliate links to products. We may receive a commission for purchases made through these links.