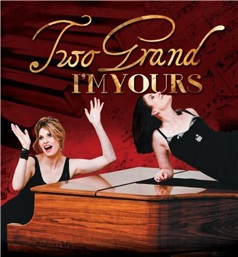 Fiona's Website Fiona's Artist Page on MainlyPiano Trysette's Website Trysette's Artist Page on MainlyPiano
Two Grand I'm Yours
Fiona Joy Hawkins and Trysette
2012 / Fiona Joy Hawkins & Trysette Loosemoore
Concert Review
September 19, 2012
Florence, Oregon
Review by Kathy Parsons
After reviewing most of Fiona Joy Hawkins’ CDs and interviewing her a few years ago, it was such a pleasure and privilege to host Fiona and Trysette Loosemore, two exceptional artists from Australia, performing Two Grand I’m Yours, their first US concert tour. Our first ever sold-out event in my house-concert series was one of the last performances in their three-month coast-to-coast tour. The audience came enthused and ready for a evening of piano and song, and no one was disappointed. Even after nineteen performances, both artists performed brilliantly and from the heart. It is a bold approach to blend Hawkins’ new age/celtic instrumental stylings with Loosemore’s more pop-oriented vocals, bringing their individual audiences together for a musical cross-over experience that once again proves that good music doesn’t need to be categorized and genres can be combined.

Fiona Joy Hawkins performed the first half of the show, playing seven original pieces, a few of which have not yet been released. Most of Ms Hawkins’ recordings feature a variety of instruments and voices, but this evening, it was just the elegant lady and the piano (and sometimes her voice). She began with two pieces from her most-recent release, Sensual Journeys. First was “Moving On,” and then she prefaced “Contemplating” with: “If I were to write a single piece of music about my whole life, this would be it.” Haunting yet warmly ethereal, I thought this piece was especially effective as a solo. “Freedom/Joy” comes from Hawkins’ award winning album Blue Dream as well as Sensual Journeys. She quipped that this is the only happy song she’s written, and the upbeat spirit of this piece is infectious! “Earthbound” and “The Journey” will be released on Hawkins’ upcoming album, 600 Years In a Moment, which she feels is her best work to date - something to really look forward to! Both pieces are wonderful and show this artist moving in an exciting direction. She closed her set with “Ceremony,” a lovely piece she composed for her wedding this past April.

Trysette Loosemore is a classically-trained pianist turned pop singer/songwriter. Her earthy yet vulnerable vocal stylings contain elements of folk, country, and rock, and her lyrics are poetic, intelligent, and heartfelt. Her recordings also feature a variety of supporting instruments and voices, but just the singer and the piano made for an intimate musical sharing of life experiences. Trysette began her set with “Keep Me Dancing,” a catchy song that set the mood. “Already” and “Inside My Dreams” are sweet wistful ballads about new love and the fears that go with it. Trysette introduced “Too Much,” her “angry song,” by explaining that her ex-husband turned forty and she hasn’t seen him since. Returning to the joys of love, Trysette performed “Sweep Me Off My Feet,” a song she performed at Fiona’s wedding. For “That Face,” she enlisted members of the audience to provide backing vocals and had most of the room singing along. “Like Water” and “Under My Skin” are new songs that have not yet been released, but the personal and biographical elements of both songs are touching and enchanting! For the last two songs of the set, Trysette called Fiona back to the piano for a couple of duets. They performed “Impossible,” which hasn’t yet been released, and “Silky Fingers” from Trysette’s Le Cafe Ancien, a beautiful, sensual love song that ended the evening on just the right note.