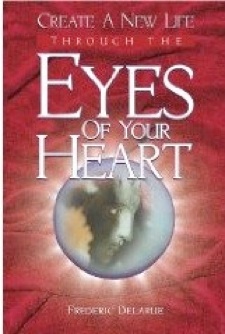 Frederic's Website Frederic's Artist Page on MainlyPiano
Product Links
Amazon (referral)
This site contains affiliate links to products. We may receive a commission for purchases made through these links.
Create A New Life Through The Eyes Of Your Heart
Frederic Delarue
2009 / Frederic Delarue Productions
228 pages
Review by Kathy Parsons
Create A New Life Through The Eyes Of Your Heart is the very personal and inspiring first book by composer/musician Frederic Delarue. The survivor of three near-death experiences over a period of twenty-eight years, the first of which was when he was in a horrific car wreck at the age of twelve, Delarue has acquired and developed some incredible abilities that include communicating directly with the angels and “beings of light” that are apparently all around us. Frederic and I have been online friends since I reviewed his first solo album in 2001 (he recently released his seventh album, which is a companion album to this book), and I have reviewed and thoroughly enjoyed all of his albums since then. We did an in-depth interview for my website in 2007 (www.mainlypiano.com), so I feel that I know Delarue fairly well. We actually met for the first time earlier this year when he performed a concert at a church in Roseburg, Oregon and had dinner afterward. The concert was a profound experience, and having a long chat over Chinese food confirmed my impression that Frederic is completely sincere in everything he does and that his greatest desire is to help all living things lead happy and meaningful lives.

The first half of the book is mainly autobiographical - a fascinating self-portrait that explains the discovery of Delarue’s gifts and how resisting them for long periods of time affected him. To realize as a young teenager that he could sense the music of people’s souls was more than he could bear - especially when a famous French singer committed suicide shortly after he intuited how troubled she was. A medical error when he was thirty caused Delarue to be temporarily paralyzed, and another car wreck ten years later resulted in a visit from Jesus. This is not your average autobiography! The second half of the book explores Delarue’s philosophies of life, religion, and music; the stories behind the making of each of his albums (“downloads from the angels”!); and exercises for achieving more clarity and developing stronger intuition. He also explains the personalized “The Music of Your Soul” recordings he creates spontaneously based on the musical vibrations of a person’s full name given at birth. He will also create music based on the vibrations of groups and companies.

I found this book a fascinating and very enjoyable read. It can be purchased by itself or with the companion CD at www.fredericdelarue.com and from Amazon.
August 13, 2009
Frederic's Website Frederic's Artist Page on MainlyPiano
Product Links
Amazon (referral)
This site contains affiliate links to products. We may receive a commission for purchases made through these links.