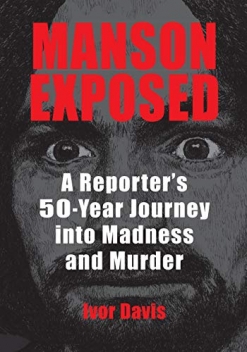 Ivor Davis' Website Ivor Davis' Artist Page on MainlyPiano
Product Links
Amazon (referral)
This site contains affiliate links to products. We may receive a commission for purchases made through these links.
Manson Exposed: A Reporter’s 50-Year Journey into Madness and Murder
Ivor Davis
2019 / Non-Fiction Book
2019/ Cockney Kid Publishing
Kindle Version
Review by Kathy Parsons
What a fascinating book this is! I don’t often read “true crime” books, but this one sounded really interesting since the author, Ivor Davis, has lived with the drama of the Manson Family and their murderous rampages since almost the beginning. As an American-based foreign correspondent for several British newspapers, Davis was one of the first reporters on the scene of the Sharon Tate and friends’ murders in 1969, attended and reported on the Manson Family’s trials, and then followed the lives of Manson and crew through the present day.

Charlie Manson was always a compelling figure in that he seemed to be evil incarnate, but Davis takes us through his early life, his aspirations to be a rock star, his trial, and his time spent in a variety of prisons from the age of nine. In the process, the author reveals a human being gone bad while shedding light on how and why that happened as well as why Manson had such complete control over his followers that they would commit not one, but many murders of innocent people simply because he ordered them to do so. Manson never earned my sympathy, but Davis helped me to understand some of the circumstances that contributed to Manson’s undoing and his total lack of remorse for the lives he took as well as those he ruined.

In addition to fleshing out Charles Manson’s life, Davis vividly describes the lives of quite a few of the Manson Family members, giving readers an idea of why they were so easily manipulated into killing, why they allowed themselves to be exploited, and why they were so devoted to Manson. Davis also recounts the lives of Roman Polanski (Tate’s husband), the attorneys for both sides of the case(s), and lists a number of people whose deaths have never been fully explained and who may have been additional victims of Manson and company.

Davis obviously took copious notes that became invaluable reference material as he wrote this new book. He also co-wrote Five To Die with Jerry LeBlanc in 1970, which was the first book about the Manson Family murders and was published a few months before Manson’s trial began.

I might mention that although Davis describes the murder scenes, which were horrendous, the descriptions aren’t gratuitous. They give the reader a very strong idea of how violent the attacks were without going into every gory detail.

I found Manson Exposed to be very compelling reading and had a hard time putting it down. It is available from Amazon and many other booksellers. This review is for the Kindle version.

August 10, 2019
Ivor Davis' Website Ivor Davis' Artist Page on MainlyPiano
Product Links
Amazon (referral)
This site contains affiliate links to products. We may receive a commission for purchases made through these links.