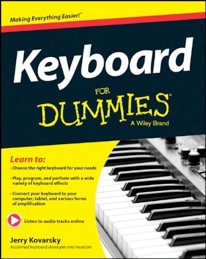 Jerry's Website Jerry's Artist Page on MainlyPiano
Product Links
Amazon (referral)
This site contains affiliate links to products. We may receive a commission for purchases made through these links.
Keyboard For Dummies
Jerry Kovarsky
2014 / John Wiley & Sons, Inc.
347 pages
Review by Kathy Parsons
Like so many predecessors in the extensive .... For Dummies series, Keyboard For Dummies goes above and beyond what I would expect from a book like this. The author, Jerry Kovarsky, has been playing the piano since the age of 8 and got his first keyboard shortly after that. In the early 1980’s, Kovarsky started demonstrating Casio keyboards and joined the company as a project manager. He has also worked for Casio, Ensoniq, and Korg as a product developer, brand manager, marketing director, and more. His work continues as a consultant with a wide group of companies. He also writes a monthly column for Keyboard magazine. Talk about knowledgable and experienced! His writing is engaging and fun to read, overflowing with tips and important points to remember and well as good, solid info written in a way that everyone can understand (not too much music or technical lingo). There is also an interactive addition to the book at Dummies.com with sound clips that demonstrate many of Kovarsky’s points and examples.

Divided into nineteen chapters, the book covers the different kinds of keyboards, how keyboards are different (and similar to) acoustic pianos and other keyboards, determining which type of keyboard would be best for an individual’s unique situation, basic music notation and technique, recording, sound quality, playing with built-in rhythms, arpeggiation, MIDI basics, keyboard shopping, software, keyboard stands and much more. I’ve been a piano teacher for the past 33 years, and was pleasantly surprised that Kovarsky (a teacher himself) repeatedly endorses the value of piano/keyboard teachers. It is becoming the norm to at least start students of all ages on keyboards while they determine whether or not they have the drive and aptitude to move on to a much more expensive (usually) acoustic piano, so I was very interested in reading what Kovarsky had to say and enjoyed the ride. This is a great handbook for teachers to keep on-hand for students to refer to as well as for keyboard shoppers either for the first time or to move up to a more sophisticated instrument. Chock-full of information and advice, it’s a great reference book!
February 5, 2014
Jerry's Website Jerry's Artist Page on MainlyPiano
Product Links
Amazon (referral)
This site contains affiliate links to products. We may receive a commission for purchases made through these links.