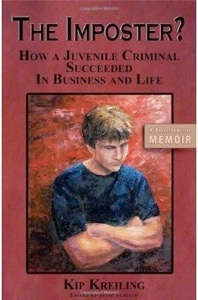 Kip's Website Kip's Artist Page on MainlyPiano
Product Links
Amazon (referral)
This site contains affiliate links to products. We may receive a commission for purchases made through these links.
The Imposter?
Kip Kreiling
2009 / TransformationHelp Press
300 pages
Review by Kathy Parsons
Subtitled “How a Juvenile Criminal Succeeded in Business and Life,” The Imposter? takes its title from several people telling the author that people cannot really change and that if that statement is true, then he, the author, must be an imposter. The early years of Kip Kreiling’s life were made up of physical abuse, crime, drug addiction, homelessness, drinking, being kicked out of school, and generally giving up on anything positive in life. His mother continually tried to reach out to him, but he rejected most of her efforts. For years, it seemed that any time Kip tried to turn his life around, he was knocked down again in the process. He tells his story in vivid detail so that readers can grasp just how down and out he was, yet we never lose sight of the fact that this was a young man trying to survive in the worst possible circumstances; we really empathize with him. Each chapter tells about Kip’s life and then illustrates one of the eight principles he espouses for a more “abundant life,” beginning with “You Can Completely Change.” The other principles are about the determination needed to make a major change and turning your attitudes and goals into positive thinking. The idea that struck me the strongest was instead of eliminating negatives from life to focus on creating positives. The difference is not in the direct outcome but in how focusing on a positive goal is so much more productive than working to improve a negative. This is a much more profound idea than it appears on the surface, and a concept that definitely deserves examination.

Kip Kreiling is a very inspiring writer in that his ideas are very clear and he is incredibly open and honest. That Kreiling went from being a street thug to a motivational leader in industry as well as a devoted husband and father speaks volumes about his ideas. His Mormon faith also played a big part in this change, but he had to reach a place where he could accept these religious teachings and to surround himself with positive, productive friends again. The book is written in a style that teenagers can grasp and identify with, but readers of all ages will be able to take something powerful and positive from this book. Recommended!
January 16, 2010
Kip's Website Kip's Artist Page on MainlyPiano
Product Links
Amazon (referral)
This site contains affiliate links to products. We may receive a commission for purchases made through these links.