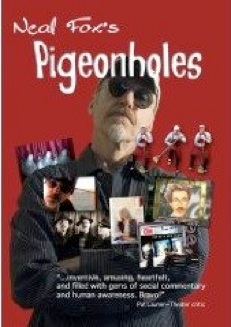 Neal's Website Neal's Artist Page on MainlyPiano
Product Links
Amazon (referral)CD Review
This site contains affiliate links to products. We may receive a commission for purchases made through these links.
Pigeonholes: A One-Man Multimedia Show
Neal Fox
2009 / Foxalot Music
DVD, 87 minutes
Review by Kathy Parsons
Pigeonholes is a one-man multimedia show created, directed, and performed by Neal Fox. Utilizing animation, dance, and spoken word in addition to the sixteen original songs, Fox has created a dynamic 90-minute musical production that incorporates caustic humor, social commentary, satire, and heartbreaking truths. The musical styles are all over the map, underscoring Fox’s reputation for being extraordinarily eclectic. He mentions in the interview that follows that attempts by the music industry to “pigeonhole” his own career have been a frequent source of frustration, and this production is a strong demonstration of why Fox is impossible to classify. A lot of music with a message is either strong lyrically or musically, but Fox’s material is both. Pigeonholes is his labor of love, a creation that is done exactly the way he wanted with no holds barred. Three years in the making, the results are unique, thought-provoking, and very entertaining. This performance was recorded at the Stella Adler Theater in Hollywood in 2005. A soundtrack CD is also available.

Pigeonholes begins with some silly but amusing “advertisements” that are projected onto a screen, accompanied by a medley of the show’s songs. Next, “Evolution” presents a dramatic instrumental prelude that accompanies a slide show depicting Earth’s beginning through industrialization. The closing shot is Fox with “REJECT” stamped on his forehead, leading into the somewhat autobiographical title song which is very catchy and includes a back-up trio of animated pigeons. From there, we go to “Alone With My Dreams, Tonight,” a story that tells a tale of loss due to an impetuous mistake in youth. The emotion and depth of the story are a poignant reminder of the late Harry Chapin. “No Balls” is rude, crude, and totally hilarious. “The Antidepressant Song” is a great blues story of a famous singer who loses his career because his life becomes “so pleasant” after being prescribed antidepressants. Bravo! “Got War?” and “Tell Me Why” are a powerful and painful pair of anti-war songs from a young child’s perspective. “Bar Noir” is slinky blues with a funny spoken-word story about a bar musician and a sexy patron. One of my favorites is “Pickup in Aisle Three,” a song about a self-important grocery clerk who lives for the chance to use the loudspeaker at the store whenever there is a mess. Visually, “(How I Love To) Squeeze My Squeeze” is amazing. Fox’s back-up trio (projected on a screen behind him) is actually three different takes of himself. One has a mustache and goatee, one has the mustache, and one is clean-shaven. The seamlessness is remarkable (and the old-timey song is cute, too!)! An interview with the world’s oldest rap artist is a riot. His multitude of body piercings includes a glittery arrow through his head. That leads into his somewhat raunchy but fun “Let’s Do It Till We Get Irritated,” which also includes impressive animation. After all of this zaniness, Fox plays a gorgeous love ballad for his wife, Naomi, “When The Real Thing Comes Around.” This guy can do anything, and to prove it, he also performs his “Human Rights Suite,” an elegant instrumental with a slide show presenting the key elements of the Universal Declaration of Human Rights, which was signed by the UN after WWII but has been largely ignored. The closing piece is the wrenching “It Doesn’t Have To Be This Way,” about working toward world peace and “keeping the dream alive no matter what the cost.” What an ending to an incredible performance!

I have to admit that I was not familiar with Neal Fox until a couple of months ago when I reviewed his Solo Piano, Volume 1 CD and songbook. Now I have added a new favorite artist to my list. This DVD is available from Amazon.com. Check it out!
August 29, 2009
Neal's Website Neal's Artist Page on MainlyPiano
Product Links
Amazon (referral)CD Review
This site contains affiliate links to products. We may receive a commission for purchases made through these links.