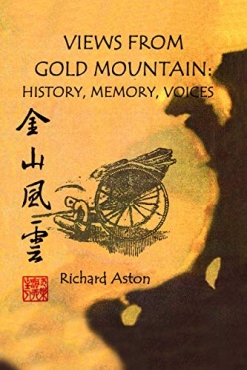 Richard's Artist Page on MainlyPiano
Product Links
Amazon (referral)GoodReadsBarnes and Noble
This site contains affiliate links to products. We may receive a commission for purchases made through these links.
Views From Gold Mountain: History, Memory, Voices
Richard Aston
2019 / Sixth Avenue Books
Review by Steve Yip
Views From Gold Mountain by Richard Aston is self-published and it’s clearly a labor of love. The book is both a brief, though incomplete memoir of someone who is threading a narrative needle through the travails of a people from a historically subjugated, oppressed, colonized, and marginalized diaspora.

Initially in my reading, it was unclear what the author, who is a British immigrant, has really been through though he shares he has been married successively to two Chinese American women in the SF Bay Area.  He first came to this country from Wales as a poor 16-year-old, and fell in with one of the major tongs in SF Chinatown in 1950!  Then he joins the merchant marine traveling to the broad reaches of Asia and Europe and is able to expound on the activities of progressive and leftwing organizers who had assimilated into the seafaring trades and built an international network of communication for leftwing labor organizers worldwide.  And somehow he ends up working for the U.S. government in some capacity as a “national defense scholar” which allegedly takes him all around Asia interviewing politicians, military leaders, academics, ordinary folks, etc.  Was he an intelligence operative? A minor foreign service officer, etc?

On the one hand, Views From Gold Mountain seems to be four or more books in one, but it shares one relentless thread -- the monumental and historical offenses suffered by Chinese people in the diaspora.  It is by someone who hasn’t fully expressed his motive and the drive to write this 728-page historical indictment of the subjugation, vicious exploitation, and oppression against the Chinese nation by the various Western European and Japanese imperialist powers; the thorough historical sweep of the role of Chinese merchant seamen in early 20th-century commerce and the role of revolutionaries and communists in organizing resistance and building labor unions in that industry; a panoramic view of various states of political and civil development in various countries in Southeast Asia; and the savage discrimination and oppression of Chinese peoples and labor in the U.S. And, of course, one should NOT leave out the role of Chinese tongs, triads, and other forms of international organized crime in perpetrating human trafficking and drug smuggling throughout Europe, Asia, and the U.S.

On the other hand, what this writer found salient was this:  Views From Gold Mountain posits an in-depth, even personal, look at some key historical figures in the development of the Chinese Marxist Left in the U.S.  It is amazing in this writer’s eyes, that much corresponds to and validates the documentation done by H. Mark Lai, the “dean of Chinese American history.”  However, some eye-popping particulars and details can be found that one will not find in Lai’s already thorough expositions of the history of the Chinese Marxist Left.

As a history buff, it is apparent to this writer that the author is not an academic let alone a trained historian, but his historical grasp of issues is laudatory. While one will find proofreading and punctuation errors are quite frequent in the text, the book possesses a feeling of authenticity. The writing is better than cursory, and it is informed by the passion and conviction of someone struggling to share his expansive life experiences.  Where did he get some of this information?  Aston’s material grasp of these historical issues, as well as an exposition of the working-class history of his adopted Chinese American family, is really amazing.  As a non-Asian person, Aston has assimilated and personalized the history of the Chinese immigrant experience in the San Francisco Bay Area.

Obviously, such a work like Views From Gold Mountain requires the curiosity of a history enthusiast, especially someone like this writer who has a deep interest in Asian American history, and in particular, the ‘Chinese Marxist Left’ that existed in this country in the 30s, 40s, and 50s.  In these matters, this work and some of what is excavated is fascinating.

A final handwritten note on page 727 states, “All proceeds will go to scholarships in Chinese Studies at the University of California at Berkeley.”  Salutations for this effort by Richard Aston.

April 20, 2022
Richard's Artist Page on MainlyPiano
Product Links
Amazon (referral)GoodReadsBarnes and Noble
This site contains affiliate links to products. We may receive a commission for purchases made through these links.