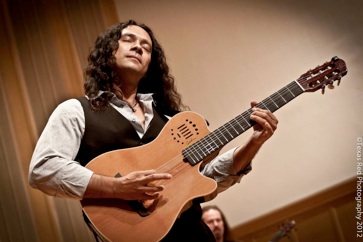 Russ' Website Russ' Artist Page on MainlyPiano
Sherman, TX, March 31, 2012
Russ Hewitt
2012 / Wynne Chapel, Austin College, Sherman, TX
Concert Review. March 31, 2012
Review by Michael Debbage
It has been 4 years since Russ Hewitt released his impressive recording debut Bajo El Sol which was followed up 3 years later by the equally impressive Alma Vieja. Focusing on quality not quantity, two recordings in 5 years is supplemented by being very active in live appearances though for the most part they are locally in the Dallas Metroplex area. Nevertheless, as his profile has raised so has the broadening of his venues most recently being in the Southern Californian area. With a second visit to the Sherman, TX area in less than 12 months, as well as the second opportunity for this reviewer, Russ Hewitt and company once again put on a very impressive show. The venue this time around was the charming Wynne Chapel on the Austin College campus, with Russ Hewitt and his band presenting another emphatic execution and energetic performance. The latter was certainly driven by the always contagious enthusiasm of percussionist Ricardo Tagliaferro who is always a joy to watch. That said, Hewitt continues to surround himself with stellar artists which only brings out the best in his own performances. Stripped down to six musicians compared to the eight man format in his prior concert in Sherman, there was no detriment to the sound and embellishments. The only complaint would be that the drums were somewhat muddled in the mix except when Ivan Torres was given the spotlight on more than one occasion, including using his hands instead of his sticks on the opening of “Pelourinho”. Placing Torres on a small platform may or may not have helped the issue but certainly his performance was once again unquestionable and passionate.

While Hewitt made sure to make this a complete band performance he was completely comfortable being up front and center sharing his melodic mesmerizing music. And there was no better way than opening the show with the toe tapping “Palma De Mallorca” taken from his debut album, followed up with the more direct pulsating “Lydia”. In fact, the pace does not drop off until we get to the first spotlight of the night courtesy of Ricardo’s slow but surging percussion performance merging into the moody verse of “El Beso” countered by its gorgeous chorus. A few songs later, Hewitt hands the spotlight over to always conservatively seated guitarist Daniel Eduardo Rodriguez. While his stance appears to be somewhat out of place in relation to the rest of the band this is quickly overlooked after hearing his delectable touch and execution as he leads us into “Bajo el Sol”.

The remaining performances continued to keep the concert active and alive which include moments for violinist Wana Hong and six string bassist Bob Parr. The best was still yet to come with a string of stimulating stunning songs courtesy of the mainstream “Pacific Sunrise”, steamrolling into “Miss Mimi”, then leading the audience into the surprising yet impressive encore of “Libertango”. Written by the revolutionary artist Astor Piazzolla from Argentina, though new to this reviewer, he clearly is one of the founder fathers Nuevo tango.

And what a fitting way to conclude another impressive concert from Hewitt, whom like the founding father he paid tribute too is also attempting to put his own magical touch and influence on the current Nuevo flamenco genre. With the exception of some venue acoustical limiters, Russ Hewitt is not only capable of creating a fine recording, but clearly is in his element as a front man performer, with a little help from a few very talented musical friends.