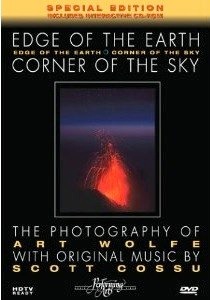 Scott's Website Scott's Artist Page on MainlyPiano
Product Links
Art Wolfe's WebsiteAmazon (referral)
This site contains affiliate links to products. We may receive a commission for purchases made through these links.
Edge of the Earth - Corner of the Sky (Special Edition)
Scott Cossu
2005 / Performing Arts
DVD, 63 minutes
Review by Kathy Parsons
Edge of the Earth - Corner of the Sky is a spectacular collection of almost 300 photographic images by award-winning and world-renowned photographer Art Wolfe accompanied by the jazz/new age music of Scott Cossu. I can’t imagine a more perfect pairing for this project than these two artists. The photography exhibit was nine years in the making with photographs from seven continents. The images are grouped into five chapters - Desert, Ocean, Mountains, Forest, and Polar - that can be played as a continuous loop with or without subtitles explaining where the images were taken. The music comes from Scott Cossu’s recording, Emerald Pathway, an album that has the soothing qualities new age music is known for coupled with a bit of a jazz edge. One of the original artists on the legendary Windham Hill label, Cossu appeared on more than fifty recordings on that label before it was sold in 1992, and has released a growing collection of music on other labels including Alula Visions, which released Emerald Pathway in 2002. Instrumentation includes piano, flutes, guitars, drums, and light percussion.

In addition to the DVD is a bonus CD-ROM with extensive notes on the places that were photographed and how they were photographed - cameras used, lenses, film, exposure times, etc. This is organized in the same fashion as the slide show, making it easy to find the photos you are interested in learning more about.

Art Wolfe is a passionate wildlife advocate who has compiled more than sixty books of photographs. It is interesting to note that there are essentially no two- or four-legged creatures in these photos (a few birds in one and a lone mountain climber in another), and the images are shot in such a way that there is no sign of human presence (or interference) anywhere. Many of the photos had to have been taken from the air and it appears that many of these places are as pristine as the day they were created. It is also interesting to note that many of these images come from the US, making me itchy to do some traveling!

CHAPTER 1 - DESERT
The chapter “Desert” has more images than the other four, with breathtaking shots of sand dunes, rock formations, vistas, and even an eclipse. Images come from the US (Texas, New Mexico, Oregon, Washington, California, Utah, Arizona, and Alaska), Mexico, Mongolia, Bolivia, Switzerland, and Australia.

CHAPTER 3 - MOUNTAINS
All of the four seasons are represented with some of the most rugged mountains in the world. Photos come from the US (California, Alaska, Montana, Wyoming, and Texas), Argentina, Chile, Pakistan, Mongolia, Switzerland, Turkey, Canada (Alberta), Bolivia, France, Nepal, and China.

CHAPTER 4 - FOREST
This chapter includes photos of trees up close and in large settings. The shots of the fall colors in Minnesota are eye-popping. Photos in this group come from the US (Minnesota, California, Colorado, Washington, Wyoming, and Alaska), Sweden, China, Argentina, Switzerland, Canada (Alberta), Bora Bora, and Chile.

CHAPTER 5 - POLAR
If this chapter doesn’t give you a chill, there is something wrong! Spectacular shots of glaciers and icebergs up close and at a distance reveal a world very few humans ever see. These photos come from the US (Alaska and Wyoming), Iceland, Canada, Antarctica, Russia (Siberia), Switzerland, Chile, Argentina, and Bolivia.

I’ve seen a lot of music and photography videos, but this one is amazing! If you are a photography buff, a world traveler, a music lover, or just like to look at pretty pictures with nice music, check this one out! The DVD can also be used as a screen saver. This special edition is available from Amazon. Please note that the Blu-Ray edition does not include the interactive CD-ROM. Very highly recommended!
August 7, 2012
Scott's Website Scott's Artist Page on MainlyPiano
Product Links
Art Wolfe's WebsiteAmazon (referral)
This site contains affiliate links to products. We may receive a commission for purchases made through these links.