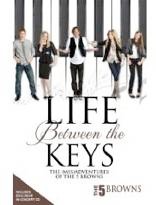 The 5 Browns' Website The 5 Browns' Artist Page on MainlyPiano
Product Links
Amazon (referral)
This site contains affiliate links to products. We may receive a commission for purchases made through these links.
Life Between the Keys
The 5 Browns
2009 / Dove Books
229 pages
Review by Kathy Parsons
Life Between the Keys is a fascinating look into the lives of The 5 Browns, siblings who are now in their 20’s and who attended the prestigious Juilliard School at the same time. They have been taking the music world by storm, performing classical music as a quintet (with five-piano music arranged specifically for them) as well as solos, duos, and trios. The Browns aspire to demystify classical music for younger people and to share their love of the music so that youngsters will come to embrace it as well. They have chosen to perform in less formal attire and always try to meet with their audiences after concerts, demystifying themselves as performers, too. In general, the classical music realm does not invite change, so, as a long-time piano teacher, I can’t help but cheer them on! Also as a piano teacher, I am blown away by the fact that five children in the same family would have such a common goal and would continue to work so closely together into adulthood, with all of them achieving astounding excellence at the piano. After reading about half of the book, I started looking for videos of them playing together on YouTube, and their performances are breathtaking.

The book begins with an introduction by Joel Diamond, the executive at Sony Music who gave The 5 Browns their start. This chapter gives an insightful glimpse into the beginnings of a major career in music and the seemingly random circumstances that got it rolling. The twenty-nine chapters that follow are a rotation of vignettes from each of The 5 Browns, with stories about their lives from childhood until quite recently. Each writer has a distinctive voice, but I especially enjoyed the entries from Gregory and Melody - Gregory for his humor and conversational writing style, and Melody for her frankness and unflinching honesty. Near the end of the book, all five recount their experiences in dealing with 9/11. Four were in New York City at the time, and Ryan, the youngest, had been commuting weekly between the family home in Utah and his pre-college classes at Juilliard. Other chapters talk about childhood adventures and everyday occurrences, the pressure on students and the cut-throat competition at their level of talent and achievement, concert joys and disasters, road stories and television appearances, and the simple joys of being such a close family. What becomes abundantly clear is that these are real people with hopes, fears, and events in their lives that really aren’t so different from everyone else’s.

A significant bonus is that there is a CD included with the book that features eleven of The 5 Browns’ most celebrated pieces recorded in a live setting. Since several of these pieces are mentioned in the book, it’s wonderful to be able to go right to the CD and hear the music.

I thoroughly enjoyed Life Between the Keys, and highly recommend it to piano students of all ages and anyone who loves music and/or well-crafted and highly entertaining stories about life. Bravo!
February 26, 2009
The 5 Browns' Website The 5 Browns' Artist Page on MainlyPiano
Product Links
Amazon (referral)
This site contains affiliate links to products. We may receive a commission for purchases made through these links.