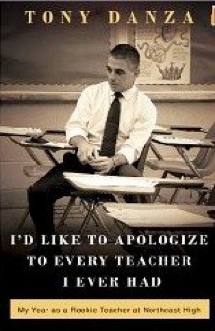 Tony's Website Tony's Artist Page on MainlyPiano
Product Links
Amazon (referral)
This site contains affiliate links to products. We may receive a commission for purchases made through these links.
I'd Like To Apologize to Every Teacher I Ever Had
Tony Danza
2012 / Crown Archetype
272 pages
Review by Kathy Parsons
Like many people, I was familiar with Tony Danza from his role on Taxi and other television programs, and I just couldn’t quite imagine him as a high school teacher. I was surprised to learn that he has a degree in history education, but after graduation, life took him in some very different directions. At the age of 59 and between television shows, the idea of doing a reality show in one of the toughest high schools in the country came up. Danza was initially repulsed by the idea - he wanted to teach, not play a role - but when the A&E network agreed to give it a try, Danza consented. Finding a high school willing to take part proved to be difficult, but Northeast High, an inner-city school in Philadelphia with a student body of about 3600 students, became that school.

In I'd Like To Apologize to Every Teacher I Ever Had, the television show takes a serious back seat to his teaching experience and his relationships with the students. He spent the school year with one 10th grade English class, and with the emotional energy needed to stay ahead of those twenty-six students, one can’t help but wonder how teachers with a full load of classes stay functioning day after day. Obviously Danza couldn’t discuss all of his students, but he chose several who stood out and allows us get to know them, too. As the school year progresses, the students realize that Danza really is in their corner, and some really open up him, letting him in on what they are up against in their young lives. Teachers who can really communicate with students can become very important to them, so I was sad to find out that Danza chose to not continue to teach for a second year. Still, he touched the lives of twenty-six kids with his passion for education and his love of books.

Danza is a colorful and vivid writer who shares his experiences from a very personal point of view. We feel the turbulence, frustration, and the rewards right along with him and genuinely care for the students, seeing them through his eyes - and heart. One of Danza’s goals was to expose the deplorable state of our current education system and to hopefully bring a new appreciation for the teachers who devote their lives to teaching. I think he succeeded well in these goals as well as in creating a very inspiring and enjoyable book. Recommended!
September 26, 2012
Tony's Website Tony's Artist Page on MainlyPiano
Product Links
Amazon (referral)
This site contains affiliate links to products. We may receive a commission for purchases made through these links.