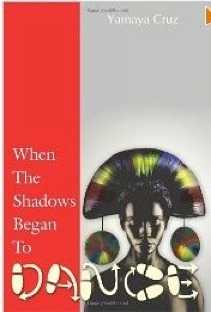 Yamaya's Website Yamaya's Artist Page on MainlyPiano
Product Links
Amazon (referral)
This site contains affiliate links to products. We may receive a commission for purchases made through these links.
When The Shadows Began To Dance
Yamaya Cruz
2011 / C&L Publishing
253 pages
Review by Kathy Parsons
When The Shadows Began To Dance is the debut novel by Yamaya Cruz. Cruz tells the story of Nelandez (Nelly) Reyes in the first person, beginning when the girl was about eight until she was about eighteen. Because Nelly is schizophrenic, it is very difficult to tell which events in the book actually happened and what was real only in her mind. While this method of storytelling might be more challenging for readers, the narrative gives a strong feeling for what it is like to be Nelly, a girl who is convinced that she is “crazy” and who is aware that many of her nightmarish experiences are in her dreams only. As readers, we’re never quite sure of what is real. A victim of abuse and neglect from her parents, and later from her beloved older brother, Nelly’s struggle to make sense of her life and to regain her sanity are thwarted no matter how hard she tries, and her time spent in a mental hospital seems to have been in vain - or did all of these events happen in her head while she was in the hospital being treated? What is clear is Nelly’s fear, anger, and despair as she tries to exorcise the demons (shadows) that take her over. What makes this book really different is Cruz’s use of ancient knowledge and African folklore as explanations for Nelly’s affliction as well as a means to heal herself. I found the book compelling reading and felt deep compassion for Nelly and her family as their worlds crumbled and raged out of control.

As much as I enjoyed the book and Ms Cruz’s writing style, there are far too many grammatical and punctuation errors as well as the misuse of quite a few words, and that was distracting for me. Better editing would help to make this a novel to be reckoned with. If you like intense psychological dramas, check this one out! It is available from Amazon.
January 2, 2012
Yamaya's Website Yamaya's Artist Page on MainlyPiano
Product Links
Amazon (referral)
This site contains affiliate links to products. We may receive a commission for purchases made through these links.